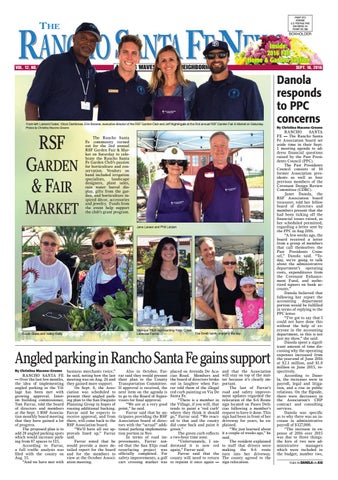 The Smith family enjoying the day.

RANCHO SANTA FE — Over the last few months, the idea of implementing angled parking in the Village has been met with growing approval. Interim building commissioner, Tom Farrar, told the board of directors and members at the Sept. 1 RSF Association monthly board meeting that they have gained a lot of progress. The proposed plan is to add 28 angled parking spots which would increase parking from 87 spaces to 115. According to Farrar, a full traffic analysis was filed with the county on Aug. 15. “And we have met with

business merchants twice,” he said, noting how the last meeting was on Aug. 26 and they gained more support. On Sept. 8, the Association was scheduled to present their angled parking plan to the San Dieguito Planning Group in hopes of rousing additional backing. Farrar said he expects to receive approval, and from there, will come back to the RSF Association board. “We’ll have all our approvals lined up,” Farrar said. Farrar noted that he would provide a more detailed report for the board and for the members to view at the October Association meeting.

Also in October, Farrar said they would present their plan to the County Transportation Committee. If approval is received, the next item on the agenda is to go to the Board of Supervisors for final approval. “We are at a very good point,” he said. Farrar said that he anticipates providing the RSF Association board of directors with the “actual” additional parking implementation portion in Nov. In terms of road improvements, Farrar noted that the San Elijo road resurfacing project was officially completed. For safety improvements, a golf cart crossing marker was

placed on Avenida De Acacias Road. Members and the board of directors broke out in laughter when Farrar told them of the illegal red curb painting on Via De Santa Fe. “There is a member in the Village, if you will, that tends to paint a ‘red curb’ where they think it should go,” Farrar said. “We reacted to that and the county did come back and paint it green.” The green curb reflects a two-hour time zone. “Unfortunately, I understand it is now red again,” Farrar said. Farrar said that the county will need to return to repaint it once again —

and that the Association will stay on top of the matter because it’s clearly important. The last of Farrar’s road and safety improvement updates regarded the relocation of the S-6 Route sign located on Paseo Delicias following a member’s request to have it done. This sign had been in front of her driveway for years, he explained. “We just learned about it a couple of weeks ago,” he said. The resident explained to staff that drivers were making the S-6 route turn into her driveway. The county agreed to the sign relocation.

RANCHO SANTA FE — The Rancho Santa Fe Association board set aside time in their Sept. 1 meeting agenda to address financial questions raised by the Past Presidents Council (PPC). The Past Presidents Council consists of 10 former Association presidents as well as four previous members of the Covenant Design Review Committee (CDRC). Janet Danola, the RSF Association board treasurer, told her fellow board of directors and members present that she had been ticking off the financial issues raised, as her scheduled permitted, regarding a letter sent by the PPC in Aug 2016. “A few weeks ago, the board received a letter from a group of members that call themselves the Past Presidents Counsel,” Danola said. “Today, we’re going to talk about the administrative department’s operating costs, expenditures from the Covenant Enhancement Fund, and authorized signers on bank accounts.” Danola believed that following her report the accounting department portion would be fulfilled in terms of replying to the PPC letter. “I’ve got to say that I could not have done this without the help of everyone in the accounting department, so this is not just my show,” she said. Danola spent a significant amount of time discussing why the operating expenses increased from the year-end of June 2016 at $2.1 million, and $1.8 million in June 2015, respectively. According to Danola, the increases were in payroll, legal and litigation, and a rise in public relations. On the flipside, there were decreases in the Association’s CHP contract and consulting services. Danola was specific as to why there was an increase in administrative payroll of $327,000. “The increase in expense of 2016 over 2015 was due to three things: the hire of two new administrative managers which were included in the budget; number two, TURN TO DANOLA ON A16