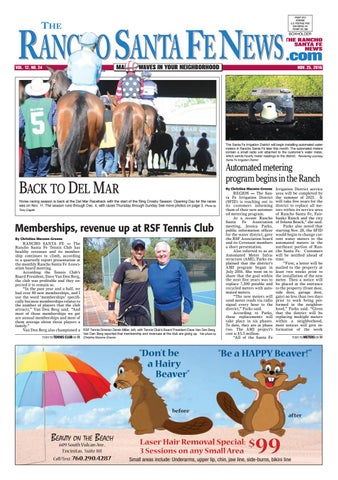 Back to Del Mar

Horse racing season is back at the Del Mar Racetrack with the start of the Bing Crosby Season. Opening Day for the races was on Nov. 11. The season runs through Dec. 4, with races Thursday through Sunday See more photos on page 3. Photo by

Memberships, revenue up at RSF Tennis Club By Christina Macone-Greene

RANCHO SANTA FE — The Rancho Santa Fe Tennis Club has healthy revenues and its membership continues to climb, according to a quarterly report presentation at the monthly Rancho Santa Fe Association board meeting. According the Tennis Club’s Board President, Dave Van Den Berg, the club was profitable and they expected it to remain so. “In the past year and a half, we had over 80 new memberships, and I use the word ‘memberships’ specifically because memberships relates to the number of players that the club attracts,” Van Den Berg said. “And most of those memberships we get are annual memberships and most of them average about three players a family.” Van Den Berg also championed a RSF Tennis Director Derek Miller, left, with Tennis Club’s Board President Dave Van Den Berg. TURN TO TENNIS CLUB ON 11

Van Den Berg reported that membership and revenues at the club are going up. File photo by

“Don’t be a Hairy Beaver”

REGION — The Santa Fe Irrigation District (SFID) is reaching out to its customers informing them of their new automated metering program. At a recent Rancho Santa Fe Association meeting, Jessica Parks, public information officer for the water district, gave the RSF Association board and its Covenant members a short presentation. Also referred to as an Automated Meter Infrastructure (AMI), Parks explained that the district’s AMI program began in July 2016. She went on to share that the goal within the next five years was to replace 7,300 potable and recycled meters with automated meters. “The new meters will send meter reads via radio signal every hour to the district,” Parks said. According to Parks, these replacements will take place in six phases. To date, they are in phase two. The AMI project’s cost is $5.5 million. “All of the Santa Fe

Irrigation District service area will be completed by the summer of 2021. It will take five years for the district to replace all meters within its service area of Rancho Santa Fe, Fairbanks Ranch and the city of Solana Beach,” she said. Parks also noted that starting Nov. 28, the SFID would begin to change current water meters to the automated meters in the northeast portion of Rancho Santa Fe. Customers will be notified ahead of time. “First, a letter will be mailed to the property at least two weeks prior to the installation of the new meter. Then a notice will be placed at the entrance to the property (front door, side door, garage door, gate) no less than two days prior to work being performed in the neighborhood,” Parks said. “Given that the district will be replacing multiple meters within a neighborhood, most notices will give information of the week

TURN TO METERS ON 11