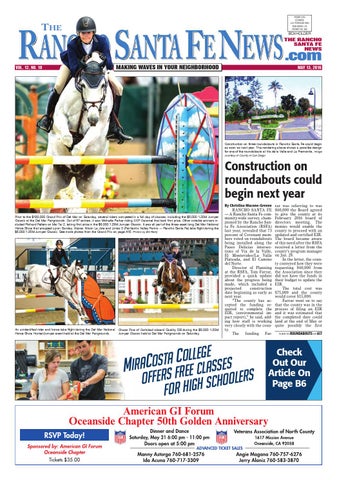 Construction on three roundabouts in Rancho Santa Fe could begin as soon as next year. The rendering above shows a possible design for one of the roundabouts at Via de la Valle and La Fremontia. Image

courtesy of County of San Diego

Construction on roundabouts could begin next year By Christina Macone-Greene rar was referring to was Prior to the $100,000 Grand Prix of Del Mar on Saturday, several riders competed in a full day of classes, including the $5,000 1.20M Jumper Classic at the Del Mar Fairgrounds. Out of 57 entries, it was Michelle Parker riding CCF Caramel that took first prize. Other notable winners included Richard Fellers on Mai Tai 2, taking first prize in the $5,000 1.25M Jumper Classic. It was all part of the three-week long Del Mar National Horse Show that wrapped up on Sunday. Above: Alison La Joie and Lintas 3 (Fairbanks Valley Farms — Rancho Santa Fe) take flight during the $5,000 1.25M Jumper Classic. See more photos from the Grand Prix on page A15. Photos by Bill Reilly

RANCHO SANTA FE — A Rancho Santa Fe community-wide survey, championed by the Rancho Santa Fe Association (RSFA) last year, revealed that 73 percent of Covenant members voted on roundabouts being installed along the Paseo Delicias intersections of Via de la Valle, El Montevideo/La Valle Plateada, and El Camino del Norte. Director of Planning at the RSFA, Tom Farrar, provided a quick update about the progress being made, which included a projected construction date beginning as early as next year. “The county has accepted the funding required to complete the EIR, (environmental impact report),” he said, adding how staff is working very closely with the county. The funding Far-

$60,000 the Board agreed to give the county at its February 2016 board of directors meeting. The monies would enable the county to proceed with an updated and certified EIR. The board became aware of this need after the RSFA received a letter from the county’s program manager on Jan. 28. In the letter, the county conveyed how they were requesting $60,000 from the Association since they did not have the funds in their budget to update the EIR. The total cost was $75,000 and the county would cover $15,000. Farrar went on to say that the county was in the process of filing an EIR and it was estimated that the completed date could land at the end of May or quite possibly the first TURN TO ROUNDABOUTS ON A17

Check Out Our Article On Page B6