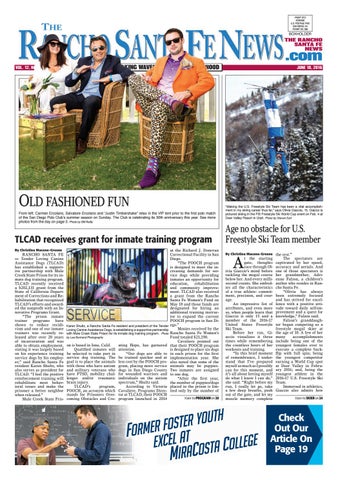 Old fashioned fun From left: Carmen Ercolano, Salvatore Ercolano and “Justin Timbershake” relax in the VIP tent prior to the first polo match of the San Diego Polo Club’s summer season on Sunday. The Club is celebrating its 30th anniversary this year. See more photos from the day on page 3. Photo by Bill Reilly

RANCHO SANTA FE — Tender Loving Canine Assistance Dogs (TLCAD) has established a supportive partnership with Mule Creek State Prison for its inmate dog training program. TLCAD recently received a $202,131 grant from the State of California Department of Corrections and Rehabilitation that recognized TLCAD’s efforts and awarded the nonprofit with an Innovative Programs Grant. “The prison inmate trainer programs have shown to reduce recidivism and one of our inmate trainers was recently released after over 20 years of incarceration and was able to obtain employment, stating it was largely based on his experience training service dogs by his employer,” said Rancho Santa Fe resident Karen Shultz, who also serves as president for TLCAD. “I feel the positive reinforcement training will rehabilitate most behavioral issues and make the prisoner a better neighbor when released.” Mule Creek State Pris-

on is based in Ione, Calif. Qualified inmates will be selected to take part in service dog training. The goal is to place the animals with those who have autism and military veterans who have PTSD, mobility challenges and/or traumatic brain injury. TLCAD’s program, POOCH, an acronym which stands for Prisoners Overcoming Obstacles and Cre-

ating Hope, has garnered attention. “Our dogs are able to be trained quicker and at less cost by the POOCH program, placing more service dogs in San Diego County for wounded warriors and individuals on the autism spectrum,” Shultz said. According to Victoria Cavaliere, Programs Director at TLCAD, their POOCH program launched in 2014

at the Richard J. Donovan Correctional Facility in San Diego. “The POOCH program is designed to meet the increasing demands for service dogs while providing inmates an opportunity for education, rehabilitation and community improvement. TLCAD also received a grant from the Rancho Santa Fe Women’s Fund on May 18 and those funds are designated for hiring an additional training instructor to expand the current POOCH program in San Diego.” Monies received by the Rancho Santa Fe Women’s Fund totaled $21,190. Cavaliere pointed out that their POOCH program is designed to place six dogs in each prison for the first implementation year. She also noted that some of the animals may be puppies. Two inmates are assigned to one dog. “After the first year, the number of puppies/dogs placed in the prison is limited only by the number of TURN TO PROGRAM ON 20

t the starting gate, thoughts race through Olivia Giaccio’s mind before tackling the mogul course below her. And every millisecond counts. She embodies all the characteristics of a true athlete: commitment, precision, and courage. An impressive list of attributes, and even more so, when people learn that Giaccio is only 15 and a member of the 2016-17 United States Freestyle Ski Team. Before her run, Giaccio visualizes it three times while remembering the countless hours of her workouts and training. “In this brief moment of remembrance, I understand that I’ve prepared myself as much as I possibly can for this moment, and it’s all about letting myself do what I know I can do,” she said. “Right before my run, I really let go, take a few deep breaths, push out of the gate, and let my muscle memory complete

The spectators are captivated by her speed, accuracy and aerials. And one of those spectators is her grandmother, Adrienne Falzon, a children’s author who resides in Rancho Santa Fe. “Olivia has always been extremely focused and has strived for excellence with a positive attitude toward daily self-improvement and a quest for knowledge,” Falzon said. Falzon’s granddaughter began competing as a freestyle mogul skier at the age of 10. A few of her many accomplishments include being one of the youngest females ever to execute a complete backflip with full spin; being the youngest competitor earning a World Cup spot at Deer Valley in February 2016; and, being the youngest athlete in the 2016-17 U.S. Freestyle Ski Team. Immersed in athletics, Giaccio also admits how TURN TO SKIER ON 24

Check Out Our Article On Page 19