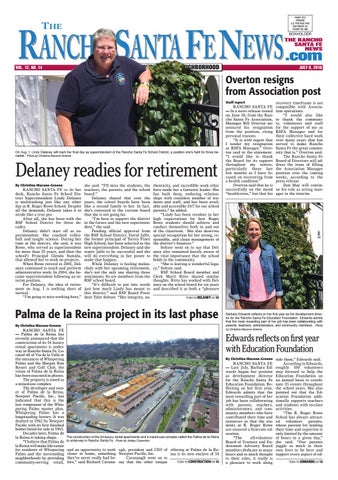 On Aug. 1, Lindy Delaney will mark her final day as superintendent of the Rancho Santa Fe School District, a position she’s held for three decades. Photo by Christina Macone-Greene

RANCHO SANTA FE — At her desk, Rancho Santa Fe School District Superintendent Lindy Delaney is multitasking just like any other day at R. Roger Rowe School. Despite all the demands, Delaney takes it in stride like a true pro. After all, she has been with the RSF School District for three decades. Delaney didn’t start off as superintendent. She coached volleyball and taught science. During her time at the district, she said, it was Rowe, who served as superintendent for more than 35 years, and then the school’s Principal Glenda Sumida, that allowed her to work on projects. When Rowe retired in 2001, Delaney continued to teach and perform administrative work. In 2004, she became superintendent following an interim position. For Delaney, the idea of retirement on Aug. 1 is nothing short of surreal. “I’m going to miss working here,”

she said. “I’ll miss the students, the teachers, the parents, and the school board.” Delaney shared that over the years, the school boards have been like a second family to her. In fact, she’s conveyed to the current board that she is not going far. “I’m here to support the district in the future and the new superintendent,” she said. Pending official approval from the RSF School District, David Jaffe, the former principal of Torrey Pines High School, has been selected as the new superintendent. Delaney said she wants Jaffe to be successful and she will do everything in her power to make that happen. While Delaney is feeling melancholy with her upcoming retirement, she’s not the only one sharing those sentiments. So are members from the RSF school board. “It’s difficult to put into words just how much Lindy has meant to this district,” said RSF Board President Tyler Seltzer. “Her integrity, au-

thenticity, and incredible work ethic have made her a fantastic leader. She has built deep, enduring relationships with countless number of students and staff, and has been available and accessible 24/7 for our school parents,” he added. “Lindy has been resolute in her high expectations for how Roger Rowe students should achieve and conduct themselves both in and out of the classroom. She also deserves special recognition for her strong, responsible, and clean management of the district’s finances.” Seltzer went on to say that Delaney also remained keenly aware of the vital importance that the school holds in the community. “She is leaving a wonderful legacy,” Seltzer said. RSF School Board member and Clerk Marti Ritto shared similar thoughts. Ritto has worked with Delaney on the school board for six years and described it as both a “pleasure

recovery timeframe is not compatible with Association operations. “I would also like to thank the community, volunteers and staff for the support of me as RSFA Manager and for their collective hard work over many years that has served to make Rancho Santa Fe the great community that is,” Overton said. The Rancho Santa Fe Board of Directors will address the issue of filling the Association Manager position over the coming weeks, according to the press release. Don May will continue his role as acting manager in the interim.

TURN TO DELANEY ON 14

RANCHO SANTA FE — In a news release issued on June 30, from the Rancho Santa Fe Association, Manager Bill Overton announced his resignation from the position, citing personal reasons. “It is with regret that I tender my resignation as RSFA Manager,” Overton said in the statement. “I would like to thank the Board for its support throughout my tenure, particularly these last few months as I have focused on recovering from a health condition.” Overton said that he is successfully on the mend “health-wise,” but that his

Barbara Edwards reflects on her first year as the development director for the Rancho Santa Fe Education Foundation. Edwards admits that the most rewarding part of her job has been collaborating with parents, teachers, administrators, and community members. Photo

Edwards reflects on first year with Education Foundation By Christina Macone-Greene side them,” Edwards said.

The construction of the 54-luxury rental apartments and a mixed-use complex called the Palma de la Reina is underway in Rancho Santa Fe. Photo by Ashley Cosentino

and an opportunity to work ugh, president and CEO of offering at Palma de la Recloser to home, something Newport Pacific, Inc. ina is its new enclave of 54 Cavanaugh went on to they’ve never really had beTURN TO CONSTRUCTION ON 14 fore,” said Richard Cavana- say that the other unique

RANCHO SANTA FE — Last July, Barbara Edwards began her position as development director for the Rancho Santa Fe Education Foundation. Reflecting on her first year, Edwards admits that the most rewarding part of her job has been collaborating with parents, teachers, administrators, and community members who have contributed their time and resources so that the students at R. Roger Rowe are ensured a first-rate education. “The all-volunteer Board of Trustees and Endowment Advisory Board members dedicate so many hours and so much thought to their roles, it really is a pleasure to work along

According to Edwards, roughly 100 volunteers step forward to help the Education Foundation on an annual basis to coordinate 35 events throughout the school years. She also pointed out that the Education Foundation additionally supports teachers and students with in-class activities. “The R. Roger Rowe School has always attracted volunteer parents, whose passion for lending their time and expertise is only limited by the amount of hours in a given day,” she said. “Our parents juggle so much in their own lives to be here and support every aspect of edTURN TO EDWARDS ON 14