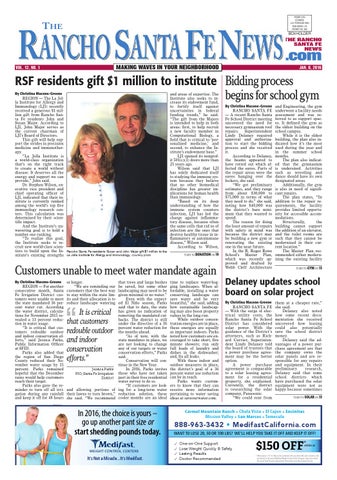 REGION — The La Jolla Institute for Allergy and Immunology (LJI) recently received a generous $1 million gift from Rancho Santa Fe residents John and Susan Major. According to LJI, John Major serves as the current chairman of LJI’s Board of Directors. This gift will help support the strides in precision medicine and immunotherapy. “La Jolla Institute is a world-class organization that’s on the right track to create a world without disease. It deserves all the energy and support we can provide,” John said. Dr. Stephen Wilson, executive vice president and chief operating officer of LJI, indicated that their institute is currently ranked among the world’s top five immunology research centers. This calculation was determined by their scientific impact. And the Institute’s unwavering goal is to hold a number one ranking. “To realize this goal, the Institute seeks to recruit new world-class scientists to build upon the In- Rancho Santa Fe residents Susan and John Major gift $1 million to the stitute’s existing strengths La Jolla Institute for Allergy and Immunology. Courtesy photo

and areas of expertise. The Institute also seeks to increase its endowment fund, to fortify itself against uncertainties in federal funding trends,” he said. “The gift from the Majors is intended to help in both areas: first, to help recruit a new faculty member in Computational Biology, a field that is critical to ‘personalized medicine,’ and second, to enhance the Institute’s endowment base.” LJI opened its nonprofit 501(c)(3) doors more than 25 years ago. Wilson said that LJI has solely dedicated itself to studying the immune system because they believe that no other biomedical discipline has greater implications for human health than immunology. “Based on its deep understanding of how the immune system counters infection, LJI has led the charge against inflammatory disease, because often the same cells that rid us of infection are the ones that destroy healthy tissue in inflammatory or autoimmune disease,” Wilson said. According to Wilson, TURN TO DONATION ON 19

REGION — For another consecutive month, Santa Fe Irrigation District customers were unable to meet the state mandated 36 percent water cut. According the water district, calculations for November 2015 revealed a 13 percent reduction in water usage. “It is critical that customers redouble outdoor and indoor conservation efforts,” said Jessica Parks, Public Information Officer at SFID. Parks also added that the region of San Diego County reduced their November water usage by 15 percent. Parks remained hopeful that the December rains would help customers reach their target. Parks also gave the reminder to turn off all irrigation during any rainfall and keep it off for 48 hours

that trees and large bushes be saved, but some other landscaping may need to be given minimal or no water.” Even with the expected El Niño season, Parks said that to date, the state has given no indication of removing the mandated cutbacks. The district is still under the directive of a 36 percent water reduction for the months ahead. “As of now, with the state mandates in place, we are not looking to change any of our targets or water conservation efforts,” Parks said. Conservation will continue in the New Year. Jessica Parks In 2016, Parks invites PIO, Santa Fe Irrigation those who have not taken District part in their free residential water survey to do so. “If customers are lookand allowing portions of ing for a long-term water their lawns to turn brown,” reduction solution, these she said. “We recommend cooler months are an ideal or longer. “We are reminding our customers that the best way to stay within the state limits and their allocation is to reduce landscape watering

It is critical that customers redouble outdoor and indoor conservation efforts.”

time to replace water-hogging landscapes. When affordable, installing a water conserving landscape can save water and be very beautiful,” she said, adding how sustainable landscaping may also boost property values in the long run. While outdoor concentration energies are in place, these energies are equally as important indoors. Parks noted how customers are encouraged to take short, five minute showers; run only full loads of laundry and dishes in the dishwasher; and, fix all leaks. With these indoor and outdoor measures in place, the district’s goal of a 36 percent water use reduction can be in reach. Parks wants customers to know that they can receive more information pertaining to water saving ideas at saveourwater.com.

begins for school gym By Christina Macone-Greene and Engineering, the gym

RANCHO SANTA FE — A recent Rancho Santa Fe School District meeting uncovered the need for necessary gymnasium roof repairs. Superintendent Lindy Delaney required approval and authorization to start the bidding process and she received it. According to Delaney, the beams appeared to have rotted out which affected the eaves. Parts of the repair areas were the eaves hanging over the lockers, she said. “We got preliminary estimates, and they range from about $30,000 to $75,000 in terms of what they need to do,” she said, noting how $40,000 was the district’s bare minimum that they wanted to spend. The reason for doing the least amount of repairs with safety in mind was because the district may be building a new gym or renovating the existing one in the near future. In the R. Roger Rowe School’s Master Plan, which was recently approved and drafted by Webb Cleff Architecture

underwent a facility needs assessment and was referred to as support spaces. It defined the gym as the oldest building on the school campus. While it is the oldest building, the plan also indicated how it’s the most used during the year and in the summer school months. The plan also indicated that the gymnasium is undersized. Activities such as wrestling and dance should have its own designated areas. Additionally, the gym is also in need of significant repairs. The plan states, “In addition to the repair requirements, the facility provides limited opportunity for accessible accommodations. Structurally, the building cannot support the addition of an elevator, and the toilet rooms are such that they cannot be modernized in their current location.” The Master Plan recommended either modernizing the existing facility TURN TO GYM ON 15

Delaney updates school board on solar project By Christina Macone-Greene

RANCHO SANTA FE — With the surge of electrical utility costs, the Rancho Santa Fe School District has considered solar power. With the guidance of the District’s attorneys, such as Richard Currier, Superintendent Lindy Delaney told the board of trustees that a power purchase agreement may be the better option. A power purchase agreement is comparable to a solar leasing agreement for a residential property, she explained. Currently, the district is researching the solar company, Panasonic. “We could rent from

them at a cheaper rate,” she said. Delaney also noted how some recent documentation she received uncovered how leasing could also potentially save the school district money. Delaney said the advantages of a power purchase agreement are that the company owns the solar panels and are responsible for any repairs and equipment. In their preliminary research, Delaney said that some school districts which have purchased the solar equipment were not as happy because sometimes TURN TO SOLAR ON 15