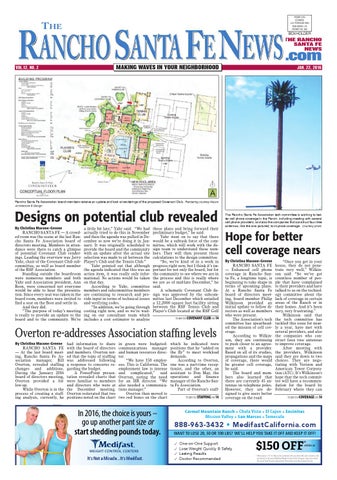 RANCHO SANTA FE — A crowded room was the scene at the last Rancho Santa Fe Association board of directors meeting. Members in attendance were there to catch a glimpse of potential Covenant Club renderings. Leading the overview was Jerry Yahr, chair of the Covenant Club subcommittee, as well as board member of the RSF Association. Standing outside the boardroom were numerous members and both Yahr and Association president, Ann Boon, were concerned not everyone would be able to hear the presentation. Since every seat was taken in the board room, members were invited to find a seat on the floor and settle in. And they did. “The purpose of today’s meeting is really to provide an update to the board and to the community. We’re

a little bit late,” Yahr said. “We had actually tried to do this in November and then the agenda was pulled in December so now we’re doing it in January. It was originally scheduled to provide the board and the community with an update after the actual site selection was made to sit between the Player’s Club and the Tennis Club.” Yahr pointed out that although the agenda indicated that this was an action item, it was really only informational. No actions would be taken on that day. According to Yahr, committee members and subcommittee members are continuing to research and provide input in terms of technical issues and verifying codes. “In addition, we’re going through costing right now, and so we’re waiting on our consultant team which includes a cost estimator to analyze

these plans and bring forward their preliminary budget,” he said. Yahr went on to say that there would be a subtask force of the committee, which will work with the design team to understand those numbers. They will then present those calculations to the design committee. “So, we’re kind of in a work in progress right now, but I think it’s important for not only the board, but for the community to see where we are in the process and this is really where we are as of mid-late December,” he said. A schematic Covenant Club design was approved by the subcommittee last December which entailed a 12,2000 square foot facility sitting between the RSF Tennis Club and Player’s Club located at the RSF Golf TURN TO COVENANT CLUB ON 14

RANCHO SANTA FE — At the last board meeting, Rancho Santa Fe Association manager, Bill Overton, revealed staffing changes and additions. During the January 2016 board of directors meeting, Overton provided a follow-up. While Overton is in the process of creating a staffing analysis, currently, he

had information to share with the board of directors and members. Overton noted that the topic of staffing was addressed following a response to concerns regarding the budget. A PowerPoint presentation revealed charts that were familiar to members and directors who were at the December meeting. Overton reiterated that two positions noted on the chart

which he indicated were positions that he “added on the fly” to meet workload demands. According to Overton, one was a part-time receptionist, and the other, an assistant to Don May, the operations and finance manager of the Rancho Santa Fe Association. Part of Overton’s staffTURN TO STAFFING ON 14

The Rancho Santa Fe Association tech committee is working to better cell phone coverage in the Ranch, including meeting with several cell phone providers, and also the companies that construct faux tree antennas, like the one pictured, to improve coverage. Courtesy photo

RANCHO SANTA FE — Enhanced cell phone coverage in Rancho Santa Fe, a longtime topic, is beginning to take shape in terms of upcoming plans. At a Rancho Santa Fe board of directors meeting, board member Philip Wilkinson provided an initial update to fellow directors as well as members who were present. The Association’s tech committee has spearheaded the mission of cell coverage. According to Wilkinson, they are continuing to push closer to an agreement with a provider. Based on all of its studies, propagations and the maps of coverage, there would be greater cell coverage, he said. The board and members also learned that there are currently 45 antennas on telephone poles. However, they are designed to give users better coverage on the road.

“Once you get in your house, they do not penetrate very well,” Wilkinson said. “So we’ve got countless number of people that have complained to their providers and have talked to us on the technology committee about the lack of coverage in certain areas of the Ranch or in their homes. And it’s been very, very frustrating.” Wilkinson said that the tech committee has tackled this issue for nearly a year, have met with several providers, and also the companies who construct faux tree antennas to improve coverage. After meeting with the providers, Wilkinson said they are down to two choices. They are negotiating with Verizon and American Tower Corporation (ATC). It’s Wilkinson’s hope that the tech committee will have a recommendation for the board by February where they can TURN TO COVERAGE ON 14