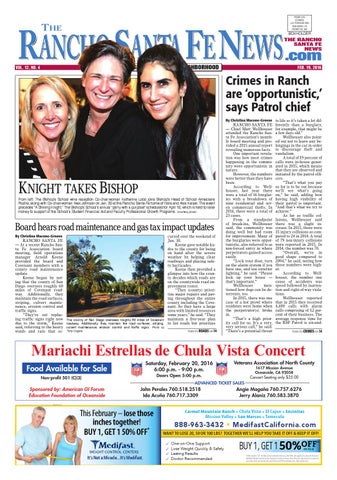 Crimes in Ranch are ‘opportunistic,’ says Patrol chief By Christina Macone-Greene to life so it’s taken a lot dif-

From left: The Bishop’s School wine reception Co-chairwoman Katherine Lobo joins Bishop’s Head of School Aimeclaire Roche, along with Co-chairwoman Alex Johnson on Jan. 30 at the Rancho Santa Fe home of Nora and Alex Kaiser. The event precedes “A Shining Knight,” The Bishop’s School’s annual “party with a purpose” scheduled for April 16, which is held to raise money to support of the School’s Student Financial Aid and Faculty Professional Growth Programs. Courtesy photo

curred over the weekend of Jan. 30. Keene gave notable kudos to the county for being on hand after the severe weather by helping clear roadways and placing safety barricades. Keene then provided a glimpse into how the county decides which roads are on the countywide road improvement roster. “They (county) prioritize major repairs and paving throughout the entire county including the Covenant. So they have a large area with limited resources some years,” he said. “They maintain a five-year plan to list roads but priorities TURN TO ROADS ON 14

RANCHO SANTA FE — Chief Matt Wellhouser attended the Rancho Santa Fe Association’s monthly board meeting and provided a 2015 annual report revealing numerous facts. One important revelation was how most crimes happening in the community were opportunistic in nature. However, the numbers were better than they have been. According to Wellhouser, last year there were a total of 16 burglaries with a breakdown of nine residential and seven commercial thefts. In 2014, there were a total of 23 cases. From a standpoint of break-ins, Wellhouser said, the community was doing well but had room for improvement. Many of the burglaries were opportunistic, also referred to as non-forced entry in where perpetrators gained access easily. “Lock your door, turn on the alarm system if you have one, and use exterior lighting,” he said. “Please lock up your house — that’s important.” Wellhouser mentioned how dogs can be deterrents, too. In 2015, there was one case of a hot prowl where residents were home when the perpetrator(s) broke in. “That’s a high priority call for us. It’s a very, very serious call,” he said. “There’s a potential threat

ferently than a burglary, for example, that might be a few days old.” Wellhouser also pointed out not to leave any belongings in the car in order to discourage theft and vandalism. A total of 19 percent of calls were in-house generated in 2015, which means that they are observed and initiated by the patrol officers. “That’s what you pay us for is to be out because we’ll see what’s going on,” he said, adding how having high visibility of their patrol is important. “And that’s what we try to achieve.” As far as traffic collisions, Wellhouser said there was a slight increase. In 2015, there were 35 injury collisions as compared to 24 in 2014. A total of 79 non-injury collisions were reported in 2015. In 2014, the number was 70. “Overall, we’re in good shape compared to 2004,” he said, noting how those numbers were higher. According to Wellhouser, the number one cause of accidents was speed followed by inattention and right-of-way violations. Wellhouser reported that in 2015 they received 4,400 calls with alarm calls comprising of 12 percent of their business. The average response time for the RSF Patrol is six-andTURN TO CRIMES ON 14