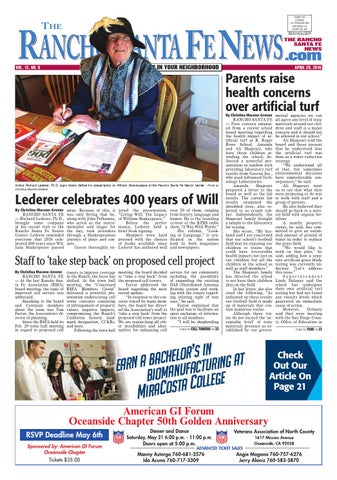 By Christina Macone-Greene mental agencies we can

Lederer celebrates 400 years of Will

By Christina Macone-Greene away. Because of this, it joyed

was only fitting that he, along with John Polhamus, who acted as the instrumentalist and singer for the day, took attendees through a Shakespearean journey of plays and sonnets. Guests thoroughly en-

the presentation, “Living Will: The Legacy of William Shakespeare.” Before the performance, Lederer held a brief book signing. Shoppers were hard pressed with the choices of books available since Lederer has authored well

over 50 of them, ranging from history, language and humor. He is the founding co-host of the KPBS radio show, “A Way With Words.” His column, “Looking at Language,” is syndicated in the nation both in both magazines and newspapers.

RANCHO SANTA FE — At the last Rancho Santa Fe Association (RSFA) board meeting, the topic of improved cell service was addressed. Speaking to the board and Covenant members about the issue was Tom Farrar, the Association’s director of planning. Since the RSFA held its Feb. 29 town hall meeting in regard to proposed cell

service for our community including the possibility of expanding the existing DAS (Distributed Antenna System) system and working with the county regarding existing right of way uses,” he said. Farrar explained that the goal was to facilitate an open exchange of information to all members. “I will be shepherding TURN TO CELL TOWERS ON 23

RANCHO SANTA FE — Pure concern emanated from a recent school board meeting regarding the health impact of artificial turf at R. Roger Rowe School. Amanda and Ali Shapouri, who have three children attending the school, delivered a powerful presentation in tandem with providing laboratory turf results from Geocon Inc., who used Advanced Technology Laboratories. Amanda Shapouri prepared a letter to the board as well as the lab results. The current lab results examined the shredded tires, also referred to as crumb rubber. Independently, the Shapouri family brought a sample to the laboratory for testing. She wrote, “My husband and I are concerned that our school’s football field may be exposing our children to toxins that could have irreversible health impacts not just on our children but all the children at the school as well as staff members.” The Shapouri family has directed the school to not have their children play on the field. In her letter, she also cited the following, “As indicated on these results our football field is made up of materials that contain numerous toxins. Although these toxins do not exceed the ‘acceptable level’ of toxic materials presence as established by our govern-

all agree any level of toxic materials around our children and staff is a major concern and it should not be allowed in our school.” Ali Shapouri told the board and those present that he understood that the artificial turf was done as a water reduction strategy. “We understand all of that, but sometimes environmental decisions have unpredictable consequences,” he said. Ali Shapouri went on to say that what they were proposing to do was to work with staff and a group of parents. He also believed they should go back to a natural field with organic fertilizer. A nearby property owner, he said, has committed to give an unlimited amount of ground of water in order to replace the grass field. “We would like to work on that plan,” he said, adding how a separate artificial grass blade testing was currently underway. “Let’s address this issue.” Superintendent Lindy Delaney said the school has undergone their own artificial turf testing but had not found any toxicity levels which generated an immediate cause of action. However, Delaney said they were meeting with the San Diego County Office of Education in TURN TO TURF ON 23

Check Out Our Article On Page 21