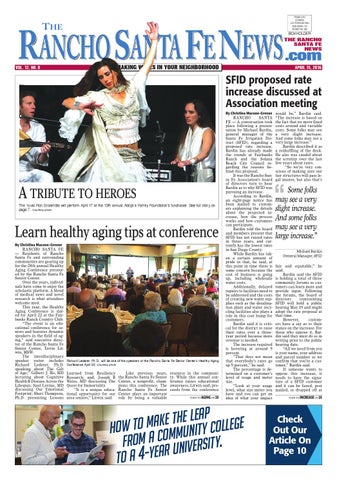 RANCHO SANTA FE — Residents of Rancho Santa Fe and surrounding communities are gearing up for the 28th annual Healthy Aging Conference presented by the Rancho Santa Fe Senior Center. Over the years, individuals have come to enjoy the scholastic platform. A blend of medical news and novel research is what attendees welcome most. This year, the Healthy Aging Conference is slated for April 22 at the Fairbanks Ranch Country Club. “The event is an educational conference for seniors and features dynamic speakers in the field of aging,” said executive director of the Rancho Santa Fe Senior Center, Terrie Litwin, MSW. The interdisciplinary speaker roster includes Richard Lederer, Ph.D. speaking about The Gift of Age;” Gilbert J. Ho, MD lecturing about Cognitive Health &amp; Disease Across the Lifespan; Saul Levine, MD discussing Our Emotional Footprint; Sheri Thompson, Ph.D. presenting Lessons

Richard Lederer, Ph.D., will be one of the speakers at the Rancho Santa Fe Senior Center’s Healthy Aging Conference April 22. Courtesy photo

Learned from Resiliency Research; and, Joseph B Weiss, MD discussing The Quest for Immortality. “It is a unique educational opportunity for our area seniors,” Litwin said.

resource in the community. While this annual conference raises educational awareness, Litwin said, proceeds from the conference TURN TO AGING ON 25

RANCHO SANTA FE — A conversation took place following a presentation by Michael Bardin, general manager of the Santa Fe Irrigation District (SFID), regarding a proposed rate increase. Bardin has already made the rounds at Fairbanks Ranch and the Solana Beach City Council regarding the reasons behind this proposal. It was the Rancho Santa Fe Association’s board of directors turn to hear Bardin as to why SFID was pursuing an increase. According to Bardin, an eight-page notice has been mailed to customers explaining the details about the projected increase, how the process works and how customers can participate. Bardin told the board and members present that SFID has not raised rates in three years, and currently has the lowest rates in San Diego County. While Bardin has taken a certain amount of pride in that, he said, at this point in time there is some concern because the cost of business is going up, including wholesale water costs. Additionally, delayed repairs to facilities need to be addressed and the costs of creating new water supplies such as the desalination plant and water recycling facilities also plays a role in this cost bump for customers. Bardin said it is critical for the district to raise their rates over a threeyear period because more revenue is needed. The increase required is hovering at around 9 percent. “That does not mean that everybody’s rates go up 9 percent,” he said. The percentage is determined on a customer’s level of usage and meter size. “Look at your usage level, what size meter you have and you can get an idea of what your impact

“The increase is based on the fact that we move fixed costs around and variable costs. Some folks may see a very slight increase. And some folks may see a very large increase.” Bardin described it as a reshuffling of the deck. He also was candid about the scrutiny over the last few years about rates. “So we’re very conscious of making sure our tier structures will pass legal muster, but also that’s

fair and equitable,” he said. Bardin said the SFID is holding a total of three community forums so customers can learn more and provide input. Following the forums, the board of directors representing SFID will hold a public hearing May 19 and might adopt the rate proposal at that time. However, customers have a say as to their stance on the increase. For those who oppose it, Bardin said they must do so in writing prior to the public hearing date. “All we need from you is your name, your address and parcel number so we confirm that you’re a customer,” Bardin said. If someone wants to oppose this increase, it needs to have the signature of a SFID customer and it can be faxed, post mailed, or dropped off at TURN TO INCREASE ON 25

Check Out Our Article On Page 10