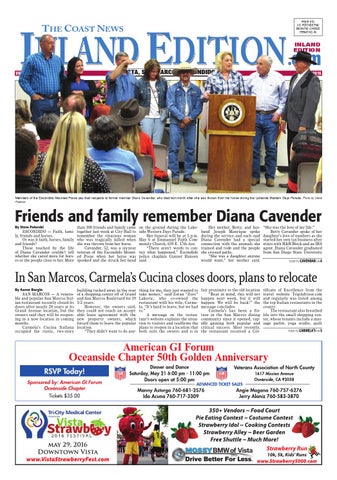 Members of the Escondido Mounted Posse pay their respects to former member Diana Cavander, who died last month after she was thrown from her horse during the Lakeside Western Days Parade. Photo by Steve

ESCONDIDO — Faith, family, friends and horses. Or was it faith, horses, family and friends? Those touched by the life of Diana Cavender couldn’t tell whether she cared more for horses or the people close to her. More

than 100 friends and family came together last week at City Hall to remember the vivacious woman who was tragically killed when she was thrown from her horse. Cavander, 52, was a six-year veteran of the Escondido Mounted Posse when her horse was spooked and she struck her head

on the ground during the Lakeside Western Days Parade. Her funeral will be at 5 p.m. May 6 at Emmanuel Faith Community Church, 639 E. 17th Ave. “There aren’t words to convey what happened,” Escondido police chaplain Gunner Hansen said.

Her mother, Betty, and husband Joseph Manrique spoke during the service and each said Diana Cavender had a special connection with the animals she trained and rode and the people she crossed paths. “She was a daughter anyone would want,” her mother said.

“She was the love of my life.” Betty Cavander spoke of her daughter’s love of numbers as she started her own tax business after stints with H&amp;R Block and an IRS agent. Diana Cavander graduated from San Diego State University TURN TO CAVENDAR ON 6

SAN MARCOS — A venerable and popular San Marcos Italian restaurant recently closed its doors after nearly 20 years at its Grand Avenue location, but the owners said they will be reopening in a new location in coming months. Carmela’s Cucina Italiana occupied the rustic, two-story

building tucked away in the rear of a shopping center off of Grand and San Marcos Boulevard for 19 1/2 years. However, the owners said, they could not reach an acceptable lease agreement with the new property owners, which forced them to leave the popular location. “They didn’t want to do any-

thing for me, they just wanted to take money,” said Zoran “Zoro” Lakovic, who co-owned the restaurant with his wife, Carmela. “It’s hard to leave, but we had to.” A message on the restaurant’s website explains the situation to visitors and reaffirms the plans to reopen in a location that both suits the owners and is in

fair proximity to the old location “Bear in mind, this will not happen next week, but it will happen. We will be back!” the message concludes. Carmela’s has been a fixture in the San Marcos dining community since it opened, rapidly gaining both popular and critical success. Most recently, the restaurant received a Cer-

tificate of Excellence from the travel website TripAdvisor.com and regularly was listed among the top Italian restaurants in the county. The restaurant also breathed life into the small shopping center, whose tenants include a massage parlor, yoga studio, quilt TURN TO CARMELA’S ON 5