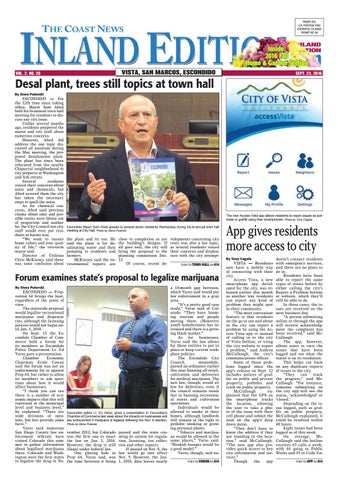 ESCONDIDO — For the 12th time since taking office, Mayor Sam Abed held his bi-annual town hall meeting for residents to discuss any city issue. Unlike several months ago, residents peppered the mayor and city staff about numerous concerns. However, Abed did address the one topic discussed ad nauseam during the May meeting, the proposed desalination plant. The plant has since been relocated from the nearby Chaparral neighborhood to city property at Washington and Ash streets. Several residents voiced their concerns about noise and chemicals, but Abed assured them the city has taken the necessary steps to quell the noise. As for chemical concerns, Abed said previous claims about odor and possible toxins were blown out of proportion and neither he, the City Council nor city staff would ever put residents in harms way. “We want to ensure home values and your quality of life,” the two-term mayor said. Director of Utilities Chris McKinney said there was some confusion about

the plant and its use. He said the plant is for desalinating water and then pumping to residents and farmers. McKinney said the environmental reports are

close to completion as are the building’s designs. If all goes well, the city will bring the proposal to the planning commission Dec. 13. Of course, recent de-

velopments concerning city trees was also a hot topic, as several residents voiced their concerns and displeasure with the city attemptTURN TO TOWN HALL ON A14

ESCONDIDO — Proposition 64 brings the heat, regardless of the point of view. The statewide proposal would legalize recreational marijuana and dispensaries, although the licensing process would not begin until Jan. 1, 2018. On Sept. 15 the Escondido Chamber of Commerce held a forum for its members as Escondido Police Department Lt. Ed Varso gave a presentation. Chamber Economic Chairman Ernie Cowan said the forum was not an endorsement for or against Prop 64, but rather to allow its members to ask questions about how it would affect businesses. “I think you can see there is a number of economic impacts that this will represent at the municipal level and business level,” he explained. “There are wide divisions of opinions, but lets provide some facts.” Varso said numerous San Diego County law enforcement officials have visited Colorado this summer to gather information about legalized marijuana there. Colorado and Washington were the first states to legalize the drug in No-

Escondido police Lt. Ed Varso, gives a presentation to Escondido’s Chamber of Commerce last week about the impacts on businesses and law enforcement if marijuana is legalize following the Nov. 8 election. Photo by Steve Puterski

vember 2012, but Colorado was the first one to enact the law on Jan. 1, 2014. However, the drug is still illegal under federal law. One glaring hole in Prop 64, Varso said, was the time between it being

passed and the state creating its system for regulation, licensing, tax collection and other aspects. If passed on Nov. 8, the law would go into effect Nov. 9. However, the Jan. 1, 2018, date leaves nearly

a 14-month gap between, which Varso said would put law enforcement in a gray area. “It’s a pretty good case study,” Varso said of Colorado. “They have booming tourism and people moving there. (However) youth homelessness has increased and there is a growing black market.” As for businesses, Varso said the law allows for those entities to put in place or keep current workplace policies. The Escondido City Council, meanwhile, passed an ordinance earlier this year banning all retail, cultivation and deliveries for medical marijuana. The new law, though, would allow for deliveries, even if the council remains steadfast in banning recreational stores and cultivation operations. Individuals would be allowed to smoke in their homes, although landlords will remain in the right to prohibit smoking or growing personal plants. “Tobacco and marijuana would be allowed in the same places,” Varso said. “Hookah lounges would be a good model.” Varso, though, said nuTURN TO FORUM ON A14

VISTA — Residents now have a mobile way of connecting with their city. Access Vista, a new smartphone app developed for the city, was released earlier this month as another way residents can report any kind of problem they might spot in their community. “The most convenient feature is that residents on the go or out and about in the city can report a problem by using the Access Vista app — instead of calling in to the city of Vista hotline, or using the city website to report a problem,” said Andrea McCullough, the city’s communications officer. Some of those problems logged since the app’s release on Sept. 12 includes notices of graffiti on public and private property, potholes and trash on public property. McCullough explained that the GPS on the smartphone tracks the location, allowing the user to take a photo of the issue with their cell phone and submit the item on the app’s drop down menu. “They don’t have to know the address if they are standing in the location,” said McCullough. “The new app also provides quick access to key city information and services.” Though the app

doesn’t connect residents with emergency services, and there are no plans to do so. Residents have been able to report the same types of issues before by either calling the city’s Report a Problem hotline or website, which they’ll still be able to do. In those cases, the issues are received on the next business day. “A person submitting online or through the app will receive acknowledgment the complaint has been received,” said McCullough. The app, however, allows users to view the issues that have been logged and see what the status is on its resolution. This helps cut back on any duplicate reports of issues to the city. “They can track the progress,” said McCullough. “For instance, someone submitting on the city app will see the status, ‘acknowledged’ or ‘closed.’ Depending on the issue logged, such as graffiti on public property, McCullough explained, it could be resolved within 48 hours. Eight issues had been logged as of this week. On average, McCullough said the hotline receives 65 calls a week, with 46 going to Public Works and 19 to Code EnTURN TO APP ON A14