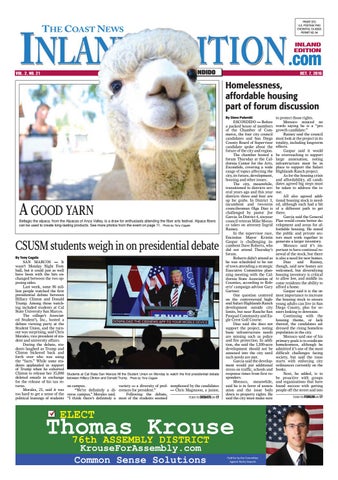 Bellagio the alpaca, from the Alpacas of Anza Valley, is a draw for enthusiasts attending the fiber arts festival. Alpaca fibers can be used to create long-lasting products. See more photos from the event on page 11. Photo by Tony Cagala

CSUSM students weigh in on presidential debate By Tony Cagala

SAN MARCOS — It wasn’t Monday Night Football, but it could just as well have been with the hits exchanged between the two opposing sides. Last week, some 86 million people watched the first presidential debate between Hillary Clinton and Donald Trump. Among those watching included students at Cal State University San Marcos. The college’s Associated Student’s, Inc., hosted a debate viewing party at the Student Union, and the turnout was surprising, said Chris Morales, vice president of student and university affairs. During the debate, students laughed as Trump and Clinton bickered back and forth over who was using the “facts.” While some students applauded in support of Trump when he exhorted Clinton to release her 35,000 deleted emails in exchange for the release of his tax returns. Morales, 21, said it was too hard to get a sense of the political leanings of students

variety — a diversity of pref- nonplussed by the candidates on campus. — Chris Magnuson, a junior, “We’re definitely a di- erences for president.” Following the debate, verse campus,” Morales said. TURN TO DEBATE ON 17 “I think there’s definitely a most of the students seemed

ESCONDIDO — Before a packed house of members of the Chamber of Commerce, the four city council candidates and San Diego County Board of Supervisor candidate spoke about the future of the city and region. The chamber hosted a forum Thursday at the California Center for the Arts, Escondido, covering a wide range of topics affecting the city, its future, development, housing and other issues. The city, meanwhile, transitioned to districts several years ago and this year districts three and four are up for grabs. In District 3, incumbent and two-term councilwoman Olga Diaz is challenged by pastor Joe Garcia. In District 4, six-year council veteran Mike Morasco takes on attorney Ingrid Rainey. In the supervisor race, Encinitas Mayor Kristin Gaspar is challenging incumbent Dave Roberts, who did not attend Thursday’s forum. Roberts didn’t attend as he was scheduled to be out of town attending a strategic Executive Committee planning meeting with the California State Association of Counties, according to Roberts’ campaign advisor Gary Gartner. One question centered on the controversial highend Safari Highlands Ranch development outside city limits, but near Rancho San Pasqual Community and Eagle Crest Golf Course. Diaz said she does not support the project, noting basic infrastructure needs are missing such as police and fire protection. In addition, she said the 1,100-acre development should not be annexed into the city until such needs are met. Garcia said the development would put additional stress on traffic, schools and response times from first responders. Morasco, meanwhile, said he is in favor of annexation and the issue boils down to property rights. He said the city must make sure

to protect those rights. Morasco minced no words saying he is a “pro growth candidate.” Rainey said the council must look at the project in its totality, including long-term effects. Gaspar said it would be overreaching to support large annexation, noting infrastructure must be in place to support the Safari Highlands Ranch project. As for the housing crisis and affordability, all candidates agreed big steps must be taken to address the issue. All also agreed additional housing stock is needed, although each had a bit of a different path to get there. Garcia said the General Plan would create better development and areas for affordable housing. He noted the public and private sectors must work together to generate a larger inventory. Morasco said it’s important to have continual renewal of the stock, but there is also a need for new homes. Diaz and Rainey, though, said new homes are welcomed, but diversifying housing inventory is critical to allow low, and middle income residents the ability to afford a home. Gaspar said it is the utmost importance to increase the housing stock to ensure young adults can live in San Diego County, plus for seniors looking to downsize. Continuing with the housing theme, or lack thereof, the candidates addressed the rising homeless population in the city. Morasco said one of his primary goals is to eradicate homelessness, although he admitted it’s one of the most difficult challenges facing society, but said the issue starts with enforcing city ordinances currently on the books. Next, he added, is to be proactive with groups and organizations that have found success with getting people off the street and into TURN TO FORUM ON 17