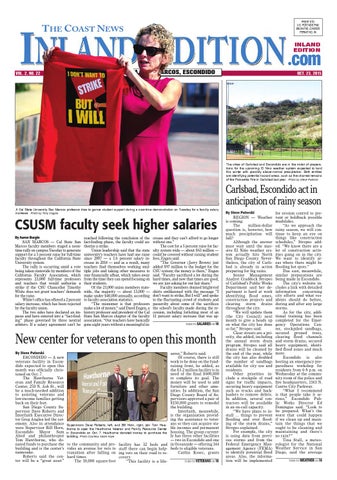 The cities of Carlsbad and Escondido are in the midst of preparations for the upcoming El Nino weather system expected to land this winter with possibly above-normal precipitation. Both entities are identifying potential hazard areas, such as the charred remains of the Poinsettia Fire in Carlsbad last year. Photo by Steve Puterski

SAN MARCOS — Cal State San Marcos faculty members staged a noontime rally on campus Tuesday to generate support for a 5 percent raise for full-time faculty throughout the California State University system. The rally is occurring amid a vote being taken statewide by members of the California Faculty Association, which represents 23,000 full-time professors and teachers that would authorize a strike if the CSU Chancellor Timothy White does not grant teachers’ demands for the raise. White’s office has offered a 2 percent salary increase, which has been rejected by the faculty union. The two sides have declared an impasse and have entered into a “fact-finding” phase governed by three neutral arbiters. If a salary agreement can’t be

reached following the conclusion of the fact-finding phase, the faculty could authorize a strike. Union leadership said that the state university’s teachers have had one raise since 2007 — a 1.6 percent salary increase in 2014 — and as a result, many teachers find themselves working multiple jobs and taking other measures to stay financially afloat, which takes away from the time they can spend focusing on their students. Of the 23,000 union members statewide, the majority — about 13,000 — make under $40,000 annually, according to faculty association statistics. “The misnomer is that professors make a lot of money,” said Darel Engen, a history professor and president of the Cal State San Marcos chapter of the faculty association. “Our teachers have basically gone eight years without a meaningful in-

crease and they can’t afford to go longer without one.” The cost for a 5 percent raise for faculty system wide — about $63 million — could be covered without raising student fees, Engen said. “The Governor (Jerry Brown) just added $97 million to the budget for the CSU system; the money is there,” Engen said. “Faculty sacrificed a lot during the hard times, and now that times are good, we are just asking for our fair share.” Faculty members donned bright-red shirts emblazoned with the message “I don’t want to strike, But I will” and spoke to the fluctuating crowd of students and passersby about some of the sacrifices the school’s faculty made during the recession, including forfeiting most of an 11 percent salary increase that was apTURN TO SALARIES ON 16

New center for veterans to open this month By Steve Puterski

ESCONDIDO — A new veterans facility in Escondido expected to open this month was officially christened on Oct. 7. The Hawthorne Veteran and Family Resource Center, 250 N. Ash St., will be a much-needed addition to assisting veterans and low-income families getting back on their feet. San Diego County Supervisor Dave Roberts and Interfaith Executive Director Greg Anglea led the ceremony. Also in attendance were Supervisor Bill Horn, Escondido Mayor Sam Abed and philanthropist Tom Hawthorne, who donated funds to purchase the building and is the center’s namesake. Roberts said the center will be a “great asset”

to the community and provides an avenue for vets to transition after falling on hard times. The 10,000 square-foot

facility has 32 beds and staff there can begin helping vets on their road to recovery. “This facility is a life-

saver,” Roberts said. Of course, there is still work to be done on the fundraising front, he added, as the $3.2 million facility is in need of the final $600,000 to complete its goal. The money will be used to add furniture and other amenities. In addition, the San Diego County Board of Supervisors approved a pair of $150,000 grants to remodel the building. Interfaith, meanwhile, is the organization providing the assistance to veterans so they can acquire stable incomes and permanent housing. The group currently has three other facilities — two in Escondido and one in Oceanside — offering 144 beds to eligible veterans. Caitlin Kosec, grants TURN TO VETERANS ON 16

REGION — Weather is coming. The million-dollar question is, however, how much precipitation will fall? Although the answer must wait until the massive El Niño weather system actually hits North San Diego County. Nevertheless, the city of Carlsbad is already in action preparing for big rains. Senior Management Analyst Craddock Stropes of Carlsbad’s Public Works Department said her department is hard at work identifying flood zones, construction projects and clearing storm drains throughout the city. “We will update them (the City Council) next month to give a heads up on what the city has done so far,” Stropes said. Clear streets are a priority, she added, including the annual storm drain program. Stropes said all drains will be cleaned by the end of the year, while the city has also doubled the number of sandbags available for city use and residents. Other priorities include a stockpile of road signs for traffic impacts, securing heavy equipment such as trucks and backloaders to remove debris. In addition, several contractors will be available in an on-call capacity. “We have plans to install … things to prevent flooding and over flooding of the storm drains,” Stropes explained. For example, the city is using data from previous storms and from the Federal Emergency Management Agency (FEMA) to identify potential flood areas. Also, the information will be implemented

for erosion control to prevent or holdback possible mudslides. “As we approach the rainy season, we will continue to keep an eye on things like construction schedules,” Stropes added. “We know there are a lot of construction activities going on in the city. We want to identify areas where there might be flooding hot spots.” Due east, meanwhile, similar preparations are being made in Escondido. The city’s website includes a link with detailed information concerning city efforts and what residents should do before, during and after any large storms. As for the city, additional training has been completed for the Emergency Operations Center, stockpiled sandbags, secured pruned trees, clearing flood channels and storm drains, secured heavy equipment, identified flood zones and much more. Escondido is also hosting an emergency preparedness workshop for residents from 6-8 p.m. on Wednesday at the community room of the police and fire headquarters, 1163 N. Centre City Parkway. “What I recommend is that people take it serious,” Escondido Public Works Director Ed Domingue said. “Look to be prepared. What’s the worst that could happen if we clean up and maintain the things that we ought to be cleaning and maintaining and there’s no rain?” Tina Stall, a meteorologist for the National Weather Service in San Diego, said the average TURN TO WEATHER ON 16