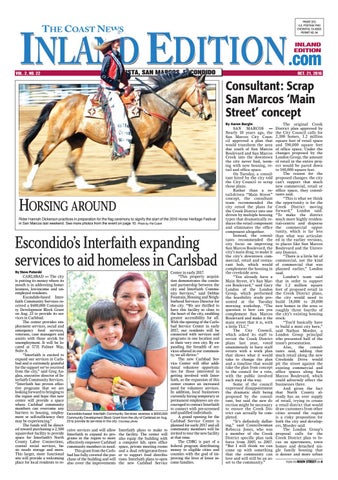 Horsing around Rider Hannah Dickerson practices in preparation for the flag ceremony to signify the start of the 2016 Horse Heritage Festival in San Marcos last weekend. See more photos from the event on page 10. Photo by Pat Cubel

CARLSBAD — The city is putting its money where its mouth is in addressing homelessness, low-income and unemployed residents. Escondido-based Interfaith Community Services received a $600,000 Community Development Block Grant on Aug. 23 to provide its services in Carlsbad. The center provides employment services, social and emergency food services, veterans, case managers and assists with those at-risk for unemployment. It will be located at 5731 Palmer Way, Suite A. “Interfaith is excited to expand our services in Carlsbad and is extremely grateful for the support we’ve received from the city,” said Greg Anglea, executive director of Interfaith Community Services. “Interfaith has proven effective programs that we are looking forward to bringing to the region and hope this new center will provide a space where Carlsbad community members can overcome any barriers to housing, employment or self-sufficiency they may be experiencing.” The funds will be directed toward purchasing a 2,500 square-foot facility to provide space for Interfaith’s North County Labor Connections, coastal social services, basic needs storage and more. This larger, more functional site will provide a welcoming place for local residents to re-

Escondido-based Interfaith Community Services receives a $600,000 Community Development Block Grant from the city of Carlsbad on Aug. 23 to provide its services in the city. Courtesy photo

ceive services and will allow Interfaith to expand its programs in the region to more effectively empower Carlsbad community members in need. This grant from the Carlsbad has fully covered the purchase of the building and will also cover the improvements

Interfaith plans to make to the facility. The center will also equip the building with a computer lab, open office space, private meeting rooms and a dual refrigerator-freezer to support food distributions. Interfaith plans to open the new Carlsbad Service

Center in early 2017. “This property acquisition demonstrates the continued partnership between the city and Interfaith Community Services,” said Debbie Fountain, Housing and Neighborhood Services Director for the city. “We are thrilled to have this facility so close to the heart of the city, enabling greater accessibility for all. With the opening of the Carlsbad Service Center in early 2017, our residents will be connected with services and programs in one location and in their very own city. By expanding the breadth of services offered in our community, we all thrive.” The new Carlsbad Service Center will offer additional volunteer opportunities for those interested in getting involved with Interfaith, as the expansion of this center creates an increased need for volunteer services. In addition, local businesses currently hiring temporary or permanent employees are encouraged to contact Interfaith to connect with pre-screened and qualified individuals. A grand opening for the Carlsbad Service Center is planned for early 2017 and all community members will be invited to tour the new facility at that time. The CDBG is part of a federal program distributing money to eligible cities and counties with the goal of improving the lives of lower income families.

SAN MARCOS — Nearly 10 years ago, the San Marcos City Council approved a plan that would transform the area due south of San Marcos Boulevard and San Marcos Creek into the downtown the city never had, teeming with new housing, retail and office space. On Tuesday, a consultant hired by the city told the City Council to scrap those plans. Rather than a retail-driven “Main Street” concept, the consultant team recommended the city retool the plans for the Creek District into one driven by multiple housing types that dramatically reduces the retail component and eliminates the office component altogether. Instead, the consultants recommended the city focus on improving San Marcos Boulevard, the city’s main drag, to make it the city’s downtown commercial, retail and restaurant hub, which would complement the housing in the creekside area. “You already have a Main Street, it’s San Marcos Boulevard,” said Gary London of the London Group, which performed the feasibility study presented at the Tuesday morning workshop. “The question is how can you complement San Marcos Boulevard and make it the main street that it is, with a little TLC.” The City Council, which asked its staff to revisit the Creek District plans last year, voted unanimously to have staff return with a work plan that shows what it would take to change the plan and a timeline that would take the plan from concept to the council for a vote, with the public involved each step of the way. Some of the council expressed disappointment the dramatic shift being proposed by the consultant, but said the new direction might be necessary to ensure the Creek District can actually be completed. “It’s definitely deflating,” said Councilwoman Rebecca Jones, who was a member of the Creek District specific plan task force from 2005 to 2007. “But I still think we can come up with something that the community can love and will still be an asset to the community.”

The original Creek District plan approved by the City Council calls for 2,300 homes, 1.2 million square feet of retail space and 590,000 square feet of office space. Under the changes proposed by the London Group, the amount of retail in the entire project would be pared down to 140,000 square feet. The reason for the proposed changes: the city can’t support that much new commercial, retail or office space, they consultants said. “This is what we think the opportunity is for the Creek District moving forward,” London said. “To make the district much more highly residential-centric and disperse the commercial opportunity, which is far less than what was articulated in the earlier versions, to places like San Marcos Boulevard and the University District. “There is a little bit of commercial, not the kind of commercial that was planned earlier,” London said. London’s team said that in order to support the 1.2 million square feet of proposed retail in the Creek District plans, the city would need to build 18,000 to 20,000 new homes in the area — roughly three fourths of the city’s existing housing stock. “You’d basically have to build a mini city here,” said Nathan Moeder, a London Group principal who presented half of the team’s presentation. Also, the consultants said, adding that much retail along the new Creekside Drive would pit the street against the existing commercial and office spaces along San Marcos Boulevard, which could adversely effect the businesses there. And given the fact that North County already has an over supply of retail, trying to create a retail district that would draw customers from other cities around the region is a risky proposition for both the city and developers, Moeder said. The London Group’s proposal calls for the Creek District plan to focus on apartments, town homes and detached single family housing that is denser and more urban TURN TO MAIN STREET ON 6