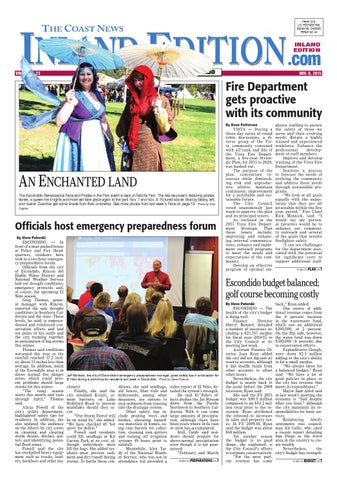 Fire Department gets proactive with its community By Dean Patterson

An Enchanted land The Escondido Renaissance Faire and Pirates in the Park event is back at Felicita Park. The two-day event, featuring pirates, fairies, a queen her knights and more will take place again at the park Nov. 7 and Nov. 8. Pictured above: Brandy Bailey, left, and Avalon Zuercher get some shade from their umbrellas. See more photos from last week’s Faire on page 13. Photo by Tony Cagala

ESCONDIDO — In front of a near packed house at Police and Fire Headquarters, residents here took in a two-hour emergency preparedness forum. Officials from the city of Escondido, Rincon del Diablo Water District and National Weather Service laid out drought conditions, emergency protocols and, of course, the upcoming El Niño season. Greg Thomas, general manager with Rincon, reported the epic drought conditions in Southern California and the state. Those levels, he said, is unprecedented and reinforced conservation efforts and laid out plans of his outfit and the city teaming together in anticipation of big storms this winter. Thomas said conditions worsened this year as the rainfall reached 37.2 inches, about 13 inches less than average. In addition, much of the Escondido area is in above normal fire danger areas, which could present problems should large storms hit this winter. “The rainy season starts this month and runs through April,” Thomas said. Alicia Powell of the city’s utility department, highlighted safety tips for residents. In addition, she also updated the audience on the efforts by city crews in cleaning and clearing storm drains, ditches, gutters and identifying potential flood zones. Powell said the city has stockpiled heavy equipment such as trucks, loaders, backhoes and other ma-

VISTA — During a three-day series of round robin discussions, a diverse group of the Vista community convened with all rank and file of the Vista Fire Department, a five-year Strategic Plan, for 2015 to 2020, was hashed out. The purpose of the plan: concentrate resources while diminishing risk and unproductive efforts; maintain continuous improvement for a justifiable and sustainable future. The City Council voted unanimously last week to approve the plan and its principal tenets. As outlined in the 2015 Vista Fire Department Strategic Plan those tenets include: improving and enhancing internal communications, enhance and implement outreach programs to meet the needs and expectations of the community. Develop an effective program of optimal em-

ployee staffing to ensure the safety of those we serve and their evolving needs. Retain a highly trained and experienced workforce. Enhance the professional development of staff members. Improve and develop training of the Vista Fire Department. Institute a process to forecast the needs of evolving the community and address those needs through sustainable programs. “We look at all goals equally with the expectation that they are all attainable within the five year period,” Fire Chief Rick Minnick, said. “I would say my personal favorites would be to enhance our community outreach and several of the goals that involve firefighter safety. “I can see challenges for the department associated with the potential for significant costs to support additional staffTURN TO PLAN ON 7

Jeff Murdock, the city of Escondido’s emergency preparedness manager, gives safety tips in anticipation for El Niño during a workshop for residents last week in Escondido. Photo by Steve Puterski

chinery. Finally, she said the city installed K-rails, cement barriers, on Lake Wohlford Road to prevent mudslides should they occur. “Our Storm Patrol will be on stand by,” she added. “We have checked 40 ‘hot spots’ for debris.” Powell said residents could fill sandbags at Kit Carson Park at no cost, although individuals must fill the bags. She added residents must prevent sediment and dirt runoff during storms. To battle those con-

ditions, she said sandbags, silt fences, fiber rolls and hydroseeds, among other measures, are options to stop sediment from running into the drainage system. Other safety tips include pruning trees and bushes, elevating hazardous materials in homes, using rain barrels for collection, cleaning rain gutters and turning off irrigation systems 48 hours prior to rainfall. Meanwhile, Alex Tardy of the National Weather Service, who was not in attendance but provided a

video report of El Niño, detailed the system’s strength. He said El Niño’s effects pushes the Jet Stream down from the Pacific Northwest to Southern California. With it can come large amounts of precipitation, although there have been years where little rain or snow has accumulated. Still, Tardy said residents should prepare for above-normal precipitation even though it is not guaranteed. “February and March TURN TO PREPARATIONS ON 7

ESCONDIDO — The health of the city’s budget is doing well. Finance Director Sheryl Bennett detailed a number of successes including a $25,767 surplus for fiscal year 2014-15 to the City Council at its meeting last week. Assistant Finance Director Joan Ryan added the city did not dip into its reserve accounts, although it did shuffle funds from other accounts to offset other losses. Nevertheless, the city budget is nearly back to the point before the 2008 recession, Ryan said. She said the FY 2015 budget was $80.3 million compared to an $83.2 million total prior to the recession. Ryan attributed the rebound to increases in sales and property taxes. In FY 2009-10, Ryan said the budget was about $68 million. Yet another reason the budget is in good shape, she explained, is the City Council’s efforts to estimate conservatively. “For the most part, our revenue has come

back,” Ryan added. One source of additional revenue comes from the 4 percent increase in the wastewater fund, which saw an additional $200,000, or 2 percent. On the flip side, however, the water fund was down $500,000 (6 percent) due to conservation efforts. Expenditures, though, were down $2.3 million adding to the city’s ability to hit a small surplus. “We always shoot for a balanced budget,” Ryan said. “We have a lot of good policies in place so the city has revenue that meets its expenditures.” Mayor Sam Abed said at last week’s meeting the economy is “bad despite what you hear,” although the city maintains its responsibilities for basic services. Reinforcing Abed’s sentiments was councilman Ed Gallo, who cited a recent report detailing San Diego as the worst area in the country to create wealth. Nevertheless, the city’s budget has strengthTURN TO BUDGET ON 7