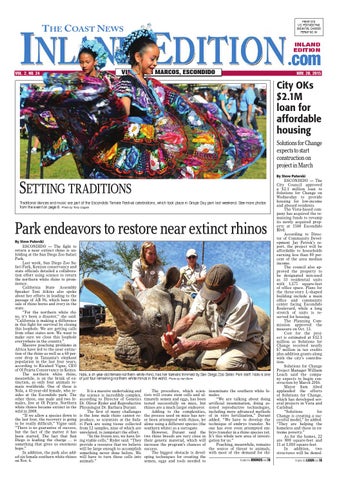 inseminate the southern white females. “We are talking about doing artificial insemination, doing assisted reproductive technologies, including more advanced methods of in vitro fertilization,” Durant added. “We have to develop the technique of embryo transfer. No one has ever even attempted embryo transfer in a rhino species yet. It’s this whole new area of investigation for us.” Poaching, meanwhile, remains the source of threat to animals, with most of the demand for rhi-

ESCONDIDO — The City Council approved a $2.1 million loan to Solutions for Change on Wednesday to provide housing for low-income and abused residents. The Vista-based company has acquired the remaining funds to revamp its newly acquired property at 1560 Escondido Blvd. According to Director of Community Development Jay Petrek’s report, the project will be affordable to households earning less than 80 percent of the area median income. The council also approved the property to be designated mix-used as 33 residential units with 1,175 square-feet of office space. Plans for the three-story L-shaped building include a main office and community center facing Escondido Boulevard, while a long stretch of units is reserved for housing. The Planning Commission approved the measure on Oct. 13. Cost for the project is estimated at $12.1 million as Solutions for Change received nearly $7 million in tax credits plus addition grants along with the city’s contribution. Solutions for Change Project Manager William Leach said the company expects to begin construction by March 2016. Mayor Sam Abed applauded the efforts of Solutions for Change, which has developed several projects in Vista and Carlsbad. “Solutions for Change is creating a successful model,” he added. “They are helping the homeless and those in extreme poverty.” As for the homes, 22 are 800 square-feet and 11 at 1,010 square-feet. In addition, two structures will be demol-

TURN TO RHINOS ON 18

Park endeavors to restore near extinct rhinos By Steve Puterski

ESCONDIDO — The fight to return a near extinct rhino is unfolding at the San Diego Zoo Safari Park. Last week, San Diego Zoo Safari Park, Kenyan conservancy and state officials detailed a collaboration effort using science to return the northern white rhino to prominence. California State Assembly Speaker Toni Atkins also spoke about her efforts in leading to the passage of AB 96, which bans the sale of rhino horns and ivory in the state. “For the northern white rhino, it’s been a disaster,” she said. “California is making a difference in this fight for survival by closing this loophole. We are getting calls from other states now. We want to make sure we close this loophole everywhere in the country.” Massive poaching problems in Africa have led to the near extinction of the rhino as well as a 60 percent drop in Tanzania’s elephant population in the last four years, according to Ricahed Vigne, CEO of Ol Pejeta Conservancy in Kenya. The northern white rhino, meanwhile, is on the brink of extinction, as only four animals remain worldwide. One of those is Nola, a 41-year-old female, who resides at the Escondido park. The other three, one male and two females, live at Ol Pejeta. Northern white rhinos became extinct in the wild in 2008. “If we allow a species down to the last four, the recovery is going to be really difficult,” Vigne said. “There is no guarantee of success, but the fact of the matter it has been started. The fact that San Diego is leading the charge … is something that gives us enormous hope.” In addition, the park also added six female southern white rhinos on Nov. 6.

It is a massive undertaking and the science is incredibly complex, according to Director of Genetics Dr. Oliver Ryder and Reproductive Physiologist Dr. Barbara Durant. The first of many challenges is the lone male rhino cannot reproduce, so scientists at the Safari Park are using tissue collected from 12 samples, nine of which are unrelated, to jumpstart the effort. “In the frozen zoo, we have living viable cells,” Ryder said. “They provide a resource that we believe will be large enough to accomplish something never done before. We will have to turn those cells into animals.”

The procedure, which scientists will create stem cells and ultimately semen and eggs, has been tested successfully on mice, but rhinos are a much larger endeavor. Adding to the complexities, the process used on mice has never been attempted with rhinos, let alone using a different species (the southern white) as a surrogate. However, Durant said the two rhino breeds are very close in their genetic material, which will increase the program’s chances of success. The biggest obstacle is developing techniques for creating the semen, eggs and tools needed to