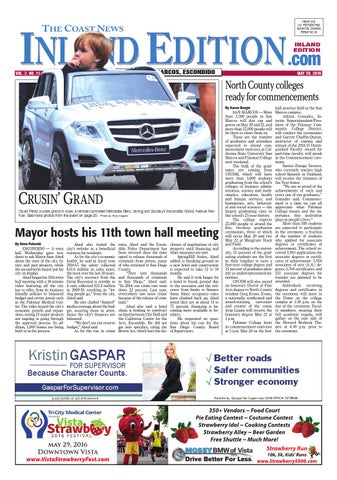 ESCONDIDO — A town hall Wednesday gave residents to ask Mayor Sam Abed about the state of the city, future and past projects, while the second-term mayor put his city on display. Abed began his 11th town hall meeting with a 10-minute video featuring all the city has to offer, from its business friendly policies to balanced budget and crown jewels such as the Palomar Medical Center. The video hyped the city’s economic growth and expansions, noting 25 major projects are ongoing or going through the approval process. In addition, 1,000 homes are being built or in the process.

Abed also touted the city’s website as a beneficial resource for residents. As for the city’s economic health, he said in fiscal year 2014-15 the entity collected $33.6 million in sales taxes, the most over the last 10 years. The city’s recovery from the Great Recession is notable as it only collected $21.8 million in 2009-10, resulting in “letting people go,” from the city, Abed said. He also chided “slanted” media coverage about the budget, assuring those in attendance the city’s finances are balanced. “We don’t use our reserve budget,” Abed said. As for the rise in crime

rates, Abed said the Escondido Police Department has been stressed since the state opted to release thousands of criminals from prison, many of who returned to San Diego County. “They sent thousands and thousands of criminals to San Diego,” Abed said. “In 2014, our crime rate went down 22 percent. Last year, everywhere saw more crime because of the release of criminals.” Abed also said a hotel chain is looking to construct on land between City Hall and the California Center for the Arts, Escondido. He did not get into specifics, citing the Brown Act, which bars the dis-

closure of negotiations of city property until financing and other measures are met. SpringHill Suites, Abed added, is breaking ground on a new hotel and construction is expected to take 12 to 18 months. He said it took longer for a hotel to break ground due to the recession and the reticence from banks to finance them. Since occupancy rates have climbed back up, Abed noted they are at about 74 to 75 percent, financing is becoming more available to hoteliers. He requested no questions about his run for the San Diego County Board of Supervisors.

SAN MARCOS — More than 3,500 people in San Marcos will don cap and gowns on May 20 and 21, and more than 25,000 people will be there to cheer them on. Those are the number of graduates and attendees expected to attend commencement exercises at California State University San Marcos and Palomar College next weekend. The bulk of the graduates are coming from CSUSM, which will have more than 3,000 students graduating from the school’s colleges of business administration, science and mathematics, education, health and human services, and humanities, arts, behavioral and social sciences — the largest graduating class in the school’s 25-year history. The college expects 25,000 people to attend the five, two-hour graduation ceremonies, three of which will occur May 20 and two May 22 at Mangrum Track and Field. According to the university, 55 percent of the graduating students are the first in their families to earn a four-year college degree and 35 percent of graduates identify as underrepresented minorities. CSUSM will also award an honorary Doctor of Fine Arts degree to North County resident Greg Evans. Evans, a nationally syndicated and award-winning cartoonist and creator of the comic strip Luann will receive the honorary degree May 21 at 1 p.m. Palomar College hosts its commencement exercises at 5 p.m. May 20 on the foot-

ball practice field at the San Marcos campus. Adrian Gonzales, Interim Superintendent/President of the Palomar Community College District, will conduct the ceremonies and Garrett Chaffin-Quiray, instructor of cinema and winner of the 2014-15 Distinguished Faculty Award for part-time faculty, will speak at the Commencement ceremony. Santos Zuniga Tavarez, who currently teaches high school Spanish in Oakland, will receive the Alumnus of the Year honor. “We are so proud of the achievements of each and every one of our graduates,” Gonzales said. Commencement is a time we can all appreciate what Palomar College means and the importance this institution plays in people’s lives.” More than 500 students are expected to participate in the ceremony, a fraction of the number of students who applied for associate degrees or certificates of achievement. The school received 3,965 applications for associate degrees or certificates of achievement: 1,950 associates of arts (A.A.) degrees; 1,764 certificates; and 251 associate degrees for transfer are planned to be awarded. Individuals receiving degrees and certificates in the ceremony will meet in the Dome on the college campus at 3:30 p.m. on the day of the ceremony. Faculty members, wearing their full academic regalia, will gather on the east side of the Howard Brubeck Theatre at 4:30 p.m. prior to the ceremony.