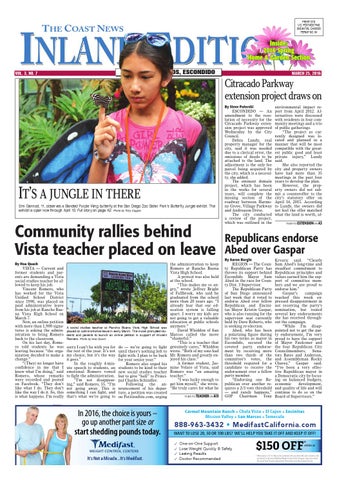 It’s a jungle in there Emi Gannod, 11, observes a Banded Purple Wing butterfly at the San Diego Zoo Safari Park’s Butterfly Jungle exhibit. The exhibit is open now through April 10. Full story on page A2. Photo by Tony Cagala

VISTA — Current and former students and parents are demanding a Vista social studies teacher be allowed to keep his job. Vincent Romero, who has worked for the Vista Unified School District since 1990, was placed on paid administrative leave from his job at Rancho Buena Vista High School on March 7. Now, an online petition with more than 1,900 signatures is asking the administration to bring Romero back to the classroom. On his last day, Romero told students he was leaving because “the organization decided to make a change.” “(They) no longer have confidence in me that I know what I’m doing,” said Romero, whose remarks were recorded and posted on Facebook. “They don’t like what I do. They don’t like the way I do it. So, this is what happens. I’m really

A social studies teacher at Rancho Buena Vista High School was placed on administrative leave in early March. The move prompted students and parents to launch an online petition in support of Vincent Romero. Photo by Hoa Quach

sorry I can’t be with you for the rest of the year. It’s not my choice, but it’s the way it goes.” In the roughly 4-minute speech to students, an emotional Romero vowed to fight the administration. “I’m not disappearing,” said Romero, 55. “I’m not going away. This is something I can fight, and that’s what we’re going to

do — we’re going to fight until there’s nothing left to fight with. I plan to be back for your senior year.” Romero also urged his students to be kind to their new social studies teacher but to give “hell” to Principal Charles Schindler. Following the announcement of his departure, a petition was created on PetitionSite.com, urging

the administration to keep Romero at Rancho Buena Vista High School. A protest was also held at the school. “This makes me so angry,” wrote Jeffrey Bright of Fallbrook, who said he graduated from the school more than 20 years ago. “I already fear that our education system is falling apart. I worry my kids are not going to get a valuable education at public schools anymore.” David Whiddon of San Marcos called the move “shameful.” “This is a teacher that genuinely cares,” Whiddon wrote. “Both of my sons had Mr. Romero and greatly enjoyed his class.” A former student, Jasmine Velare of Vista, said Romero was “an amazing teacher.” “I was lucky enough to get him myself,” she wrote. “He truly cares for what he TURN TO TEACHER ON A15

ESCONDIDO — An amendment to the resolution of necessity for the Citracado Parkway extension project was approved Wednesday by the City Council. Debra Lundy, real property manager for the city, said it was needed due to a clerical error, the omissions of deeds to be attached to the land. The adjustment is the only fee parcel being acquired by the city, which is a necessity, she added. The eminent domain project, which has been in the works for several years, will complete the missing section of the roadway between Harmony Grove, Village Parkway and Andreason Drive. The city conducted a review of the project, which was outlined in the

environmental impact report from April 2012. Alternatives were discussed with residents in four community meetings and a trio of public gatherings. “The project as currently designed was located and planned in a manner that will be most compatible with the greatest public good and least private injury,” Lundy said. She also reported the city and property owners have had more than 35 meetings in the past four years to develop the plan. However, the property owners did not submit a counteroffer to the city’s statutory offer on April 14, 2015. According to Lundy, the owners did not feel the offer matched what the land is worth, alTURN TO EXTENSION ON A3

REGION — The County Republican Party has thrown its support behind Escondido Mayor Sam Abed in the race for County Dist. 3 Supervisor. The Republican Party of San Diego announced last week that it voted to endorse Abed over fellow Republican and Encinitas Mayor Kristin Gaspar, who is also running for the supervisor seat currently held by Dave Roberts, who is seeking re-election. Abed, who has been a polarizing figure during his two terms as mayor in Escondido, secured the coveted party endorsement by receiving more than two thirds of the committee’s votes, the threshold required for a candidate to receive the endorsement over a fellow party member. “Endorsing one Republican over another requires a 2/3 vote threshold — and rarely happens,” GOP Chairman Tony

Krvaric said. “Clearly Sam Abed’s long-time and steadfast commitment to Republican principles and values earned him the support of committee members and we are proud to endorse him.” Gaspar’s campaign reached this week expressed disappointment in not receiving the party’s nomination, but touted several key endorsements she has received throughout the campaign. “While I’m disappointed not to get the party endorsement, I’m very proud to have the support of Mayor Faulconer and the four Republican City Councilmembers, Senators Bates and Anderson, and Assemblyman Rocky Chavez,” Gaspar said. “I’ve been a very effective Republican mayor in a Democratic city by focusing on balanced budgets, economic development, and quality of life and will continue to do so on the Board of Supervisors.”