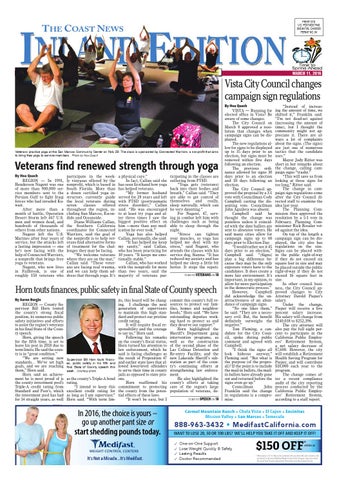 Veterans practice yoga at the San Marcos Community Center on Feb. 29. The class is sponsored by Connected Warriors, a nonprofit that aims to bring free yoga to service members. Photo by Hoa Quach

REGION — In 1991, Henderson Nugent was one of more than 900,000 service members sent to the Persian Gulf to fight Iraqi forces who had invaded Kuwait. After more than a month of battle, Operation Desert Storm left 467 U.S. men and women dead, and hundreds of thousands of others from other nations. Nugent left the U.S. Marines after four years of service, but the attacks left a lasting impression — one he’s now facing with the help of Connected Warriors, a nonprofit that brings free yoga to veterans. Nugent, who now lives in Fallbrook, is one of roughly 150 veterans who

participate in the weekly vinyasas offered by the nonprofit, which is based in South Florida. More than a dozen certified yoga instructors currently guide the local veterans during seven classes offered throughout the region, including San Marcos, Escondido and Oceanside. Diane Williams Callan, the Southern California coordinator for Connected Warriors, said the goal of the nonprofit is to help veterans find alternative forms of treatment for the challenges they may be facing. “We welcome veterans where they are on the mat,” Callan said. “These veterans are facing real trauma, and we can help them address that through yoga. It’s

a physical cure.” In fact, Callan said she has seen firsthand how yoga has helped veterans. “My former husband served for 28 years and left with PTSD (posttraumatic stress disorder),” Callan said. “He was encouraged to at least try yoga and after three times I saw the biggest positive effect on him —more than any medication he ever took.” Yoga has also helped Callan, personally, she said. “It has helped me keep my sanity,” said Callan, who has been practicing for 10 years. “It keeps me emotionally stable.” Callan, who has worked with the nonprofit for more than two years, said the majority of veterans par-

ticipating in the classes are suffering from PTSD. “Yoga gets (veterans) back into their bodies and breath,” Callan said. “They are able to get control of themselves and really, sleep naturally, which can be very daunting.” For Nugent, 47, serving in combat left him with challenges such as being able to sleep through the night. “Stress can tighten your muscles, so yoga has helped me deal with my stress,” said Nugent, who attends the classes with his service dog, Sienna. “It has reduced my anxiety and has helped me sleep a little bit better. It stops the repetiTURN TO VETERANS ON 18

REGION — County Supervisor Bill Horn touted the county’s strong fiscal position, its numerous public safety initiatives and efforts to assist the region’s veterans in his final State of the County speech. Horn, giving the speech for the fifth time, is set to leave his post in 2018 due to term limits. He said the county is in “great condition.” “We are setting new standards… We’ve set high goals, and we are reaching them,” Horn said. Horn said an achievement he is most proud of is the county investment pool’s Triple-A credit rating from Standard and Poor’s, which the investment pool has had for 14 straight years, as well

as the county’s Triple-A bond rating. “I intend to keep this excellent credit rating for as long as I am supervisor,” Horn said. “With term lim-

its, this board will be changing. I challenge the next generation of supervisors to maintain this high standard and protect our pristine credit rating. It will require fiscal responsibility and the courage to say no,” Horn said. Following his remarks on the county’s fiscal status, Horn turned his attention to law enforcement, which he said is facing challenges as the result of Proposition 47 and earlier state laws that allowed lower-level offenders to serve their time in county jails as opposed to state prisons. Horn reaffirmed his commitment to protecting the county from the potential effects of these laws. “It won’t be easy, but I

commit this county’s full resources to protect our families, homes and neighborhoods,” Horn said. “We have outstanding deputies working hard to protect us and they deserve our support.” Horn highlighted the Sheriff’s Department gang intervention programs, as well as the construction of the second phase of the Las Colinas Detention and Re-entry Facility, and the new Lakeside Sheriff’s substation as part of the county’s continuing efforts at strengthening law enforcement. He also highlighted the county’s efforts at taking care of the region’s large population of veterans, deTURN TO SPEECH ON 18

VISTA — Running for elected office in Vista? Be aware of some changes. The City Council on March 8 approved a resolution that changes when campaign signs can be displayed. The new regulations allow for signs to be displayed up to 35 days prior to an election, but signs must be removed within five days following an election. The previous ordinance allowed for signs 30 days prior to an election and 10 days following an election. The City Council approved the proposal by a 3-1 vote with Councilman Cody Campbell casting the dissenting vote. Councilman John Aguilera was absent. Campbell said he thought the change was pointless unless it coincided with the date ballots are sent to absentee voters. He said many cities allow for campaign signs up to 60 days prior to Election Day. “I would rather see it 45 days prior to an election,” Campbell said. “(Signs) play a big difference because they may be the only exposure voters have to the candidates. It does create a more fair environment. It’s important, in my opinion, to allow for more participation in the democratic process.” However, Campbell did acknowledge the unattractiveness of an abundance of campaign signs. “No one likes them,” he said. “They are a necessary evil. But, the benefit definitely outweighs the negative.” Tom Fleming, a candidate for the City Council, spoke during public comment and agreed with Campbell. “I think the signs all look hideous anyway,” Fleming said. “But what is the purpose (of the proposal)? If the point is to include the mail-in ballots, the mailin ballots have already gone out and returned before the signs even go up.” Councilman John Franklin said the change in regulations is a compromise.

“Instead of increasing the amount of time, we shifted it,” Franklin said. “I’m not dead-set against (increasing the amount of time), but I thought the community might not appreciate it. There are always a lot of complaints about the signs. (The signs) are just one of numerous tactics that the candidate uses.” Mayor Judy Ritter was short in her remarks about the change, calling campaign signs “trashy.” “This will save us from looking at those signs for too long,” Ritter said. The change in campaign sign regulations come after the City Council directed staff to examine the idea last year. The Planning Commission then approved the resolution by a 5-1 vote in February. Planning Commissioner Rick Rosaler voted against the idea. On top of the length a campaign sign can be displayed, the city also has regulations on the size. Signs can be placed within the public right-of-way if they do not exceed six square feet in size and may be placed outside the public right-of-way if they do not exceed 16 square feet in size. In other council business, the City Council approved changes to City Attorney Darold Pieper’s salary. Under the change, Pieper will receive a five percent salary increase. His salary will change from $240,038 to $252,396. The city attorney will also pay the full eight percent to participate in the California Public Employees’ Retirement System, a net salary decrease of $7,600. However, the city will establish a Retirement Health Saving Program for Pieper, and will contribute $10,000 each year to the program. The change comes after a recent compliance audit of the city reporting process conducted by the California Public Employees’ Retirement System, according to a staff report.