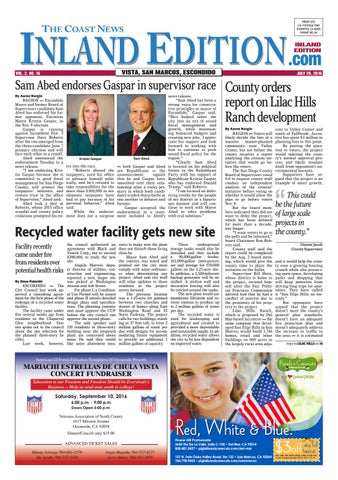 REGION — Escondido Mayor and former Board of Supervisors candidate Sam Abed has endorsed his former opponent, Encinitas Mayor Kristin Gaspar, in the Nov. 8 election. Gaspar is running against incumbent Dist. 3 Supervisor Dave Roberts after the two emerged from the three-candidate June 7 primary election and will face each other in a runoff. Abed announced the endorsement Tuesday in a news release. “I am endorsing Kristin Gaspar because she is committed to good fiscal management for San Diego County, will protect the taxpayers’ interests, and restore trust in the office of Supervisor,” Abed said. Abed took a shot at Roberts, whose 2015 office scandal and county policy violations prompted his en-

try into the race. “Roberts abused the taxpayers, used his office to advance himself politically, and he’s refused to take responsibility for the more than $300,000 in settlements taxpayers have had to pay because of his personal behavior,” Abed said. While the endorsement does not a surprise

— both Gaspar and Abed are Republicans — the announcement signals that he and Gaspar have smoothed over their relationship after a rocky primary in which both candidates traded sharp barbs at one another in debates and forums. Gaspar accepted the endorsement in a statement included in Abed’s

news release. “Sam Abed has been a strong voice for conservative principles as mayor of Escondido,” Gaspar said. “He’s helped usher the city into an era of sound fiscal management and growth, while maintaining balanced budgets and creating new jobs. I appreciate his support and look forward to working with him to continue to push sound fiscal policy for the region.” “Clearly Sam Abed is focused on his political future in the Republican Party with his support of Republican Kristin Gaspar who has endorsed Donald Trump,” said Roberts. “I am focused on delivering results for the people of my district in a bipartisan manner and will continue to work with Mayor Abed to solve problems with real solutions.”

ESCONDIDO — The City Council last week approved a consulting agreement for the first phase of the redesign of a recycled water facility. The facility came under fire several weeks ago from residents in the Chaparral Glen neighborhood. Dozens spoke out to the council about the site selection for the planned three-story facility. Last week, however,

the council authorized an agreement with Black and Veatch Corp., not to exceed $200,000, to study the new site. Angela Morrow, deputy director of utilities, construction and engineering, reported a new, larger site was picked at Washington Avenue and Ash Street. For phase I, a Conditional Use Permit will be issued and phase II entails detailed design plans and specifications. The planning commission must approve the CUP before the city council can approve the second phase. The only speaker said 110 residents in three-story building near the proposed plant are concerned about noise. He said they would like noise abatement mea-

sures to make sure the plant does not disturb those living close by. Mayor Sam Abed said the concern was noted and pointed out the city must comply with noise ordinances when determining any project. Abed said city staff will relay updates to those residents as the project moves forward. The previous location was a 3.25-acre lot jammed between two churches and dozens of homes along East Washington Road and El Norte Parkway. The project calls for two buildings, standing at 37 feet tall, to treat 2 million gallons of water per day with designs for accommodating future equipment to provide an additional 1 million gallons of capacity.

Three underground storage tanks would also be installed and they include a 90,000-gallon feeder, 163,000-gallon inter-processer and storage for 970,000 gallons on the 3.25-acre site. In addition, a 1,500-kilowatt backup generator will be installed. A six-foot wall and decorative fencing will also be erected around the tanks. The new plant would use membrane filtration and reverse osmosis to produce up to 2 million gallons of water per day. The recycled water is used for landscaping and agricultural and created to provided a more dependable and sustainable supply. In addition, recycled water allows the city to be less dependent on imported water.

REGION — Voters will likely decide the fate of a massive master-planned community near Valley Center, but not before the county receives a report analyzing the citizens initiative that would go before the voters. The San Diego County Board of Supervisors voted 4-0 to request county staff conduct an independent analysis of the citizens’ initiative before voting on whether it would allow the plan to go before voters Nov. 8. But the board members indicated they did not want to delay the project, which has been debated for more than a decade, any longer. “I want voters to go to the polls and be informed,” board Chairman Ron Roberts said. County staff said the report could be completed by the Aug. 2 board meeting, which would give the county time to place the initiative on the ballot. Supervisor Bill Horn, whose district is home to the project, recused himself after the Fair Political Practices Commission advised him that he had a conflict of interest due to the proximity of his property to the project. Lilac Hills Ranch, which is proposed by Del Mar-based Accretive — the same company that developed San Elijo Hills in San Marcos, would build 1,746 homes, retail and other buildings on 600 acres in the largely rural area adja-

cent to Valley Center and south of Fallbrook. Accretive has spent $3 million in planning fees to this point. By putting the question to voters, the project would sidestep the county’s normal approval process and likely insulate itself from opposition’s environmental lawsuits. Supporters have argued that the project is an example of smart growth,

This could be the future of large scale projects in the county.” Dianne Jacob County Supervisor

and it would help the county ease a growing housing crunch while also preserving open space, developing parks and shopping that will keep motorists from driving long trips for amenities. They have called it “San Elijo Hills on steroids.” But opponents have argued that the project doesn’t meet the county’s general plan standards, doesn’t have an adequate fire protection plan and doesn’t adequately address the increase in traffic to the area — it is estimated TURN TO LILAC HILLS ON 16

Not valid with other offers. Valid at Del Mar &amp; San Marcos location ONLY. EXP: 7.31.16