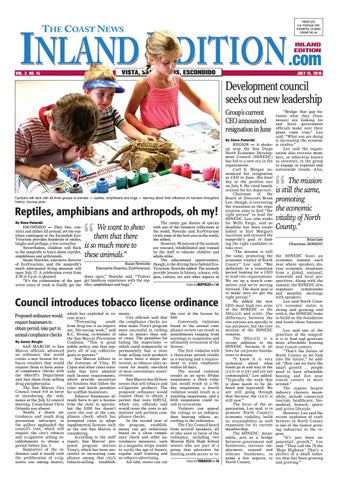 Campers will work with all three groups of animals — reptiles, amphibians and bugs — learning about their influence on humans throughout history. Courtesy photo

Reptiles, amphibians and arthropods, oh my! By Steve Puterski

We want to show them that there is so much more to these animals.”

ESCONDIDO — They bite, constrict and slither all around, yet the reptilian contingent at the Escondido EcoVivarium provides hundreds of smiles, laughs and perhaps, a few screeches. Nevertheless, children will flock to the nonprofit to learn about reptiles, amphibians and arthropods. Susan Nowicke, executive director Susan Nowicke of EcoVivarium, said the nonprofit’s Executive Director, EcoVivarium much anticipated living museum will open July 15. A celebration event from doors open,” Nowicke said. “Visitors 4:30 to 8 p.m. is planned. “It’s the culmination of the past get hands-on experience with the repseven years of work to finally get the tiles, amphibians and bugs.”

The center gas dozens of species with one of the foremost collections in the world, Nowicke said. EcoVivarium rivals some of the best zoos in the world, she added. However, 98 percent of the animals are rescued, rehabilitated and trained by the staff to educate children and adults alike. The educational opportunities, though, is the driving force behind EcoVivarium, Nowicke added. The animals provide lessons in history, science, religion, culture, art and other aspects of TURN TO REPTILES ON 14

SAN MARCOS — San Marcos officials advanced an ordinance that would create a new license for tobacco retailers that would require them to have annual compliance checks with the Sheriff’s Department and ban them from selling drug paraphernalia. The San Marcos City Council voted 4-0 in favor of introducing the ordinance at the July 12 council meeting. Councilman Chris Orlando was absent. Nearly a dozen anti-tobacco and youth drug prevention advocates in the gallery applauded the council’s vote, which will require the city’s tobacco and e-cigarette selling establishments to obtain a permit before Jan. 1. Supporters of the ordinance said it would curb the proliferation of e-cigarette use among minors,

which has exploded in recent years. “Preventing youth from drug use is an important, life-saving work,” said K.C. Strang, co-founder of the San Marcos Prevention Coalition. “This is great public policy, one that supports all of our collective goals as parents.” San Marcos follows in the footsteps of Vista, El Cajon and other cities statewide that have adopted such license requirements, which provide incentives for business that follow the rules and harsh penalties for scofflaw businesses. Tobacco businesses already have to get a license from the state to operate, but the $100 fee doesn’t cover the cost of the compliance check, which has prompted cities to adopt supplemental licenses such as the one San Marcos is considering. According to the staff report, San Marcos’ proposed program mirrors Vista’s, which has been successful in increasing compliance among that city’s tobacco-selling establish-

ments. City officials said that the compliance checks are what make Vista’s program more successful in curbing sales to minors than other cities. The penalties for failing the inspections — which could temporarily or permanently ban a store from selling such products — have been a major deterrent, as tobacco sales account for nearly one-third of most convenience stores’ revenue. San Marcos has 60 businesses that sell tobacco and e-Cigarette products. The proposed ordinance would require them to obtain a permit that costs $189.52, which city officials said would cover the costs to administer and perform compliance checks. In the second year of the program, establishments can get reductions based on a clean compliance check and other anti-tobacco measures, such as a magnetic stripe reader to verify the age of buyers, regular staff training and no tobacco advertising. All told, stores can cut

the cost of the license by $60. Conversely, violations found in the annual compliance review can result in punishments ranging from warnings to suspension and ultimately revocation of the license. The first violation with a three-year period results in a warning and a requirement to train employees within 60 days. The second violation results in an up-to 30-day suspension; a third violation would result in a 90day suspension; a fourth violation would result in a yearlong suspension, and a fifth suspension could result in revocation. Violators can appeal the rulings to an independent hearing officer, according to the ordinance. The City Council heard from several speakers, all of who were in favor of the ordinance, including two Mission Hills High School seniors who are part of a group that advocates for limiting youth access to toTURN TO TOBACCO ON 14

REGION — A shakeup atop the San Diego North Economic Development Council (SDNEDC) has led to a new era in the organization. Carl S. Morgan announced his resignation as CEO in June. His final day in the position was on July 8. He cited family reasons for his departure. Chairman of the Board of Directors Brian Lee, though, is overseeing the transition as the organization aims to find “the right person” to lead the SDNEDC. Lee, who works for Wells Fargo, said no deadline has been established to hire Morgan’s successor and stressed the nonprofit’s goal of finding the right candidate to take over. “The mission is still the same, promoting the economic vitality of North County” Lee said. “But definitely in a transition period looking for a CEO to lead two organizations. We set up a search committee and we’re moving forward. The main goal is to make sure we get the right person.” He added the new CEO must lead two arms of the SDNEDC — the 501(c)(3) and (c)(6). The differences between the two entities are specific to tax purposes, but the core mission of the SDNEDC remains. The 501(c)(3) is a recent addition to the SDNEDC because it allows for corporate foundations to donate. “I know it is very technical about what funds go in and stay in the (c)(3) or (c)(6) and are not commingled,” Lee added. “Typically the work that is done needs to be defined and separated. We are still going through that because the (c)(3) is still new.” The focus of the organization, Lee said, is to promote North County’s economic viability, build its sustainability as well expansion for its current membership. The SDNEDC, meanwhile, acts as a bridge between government and businesses, increase employment, expand and relocate businesses, to name a few aspects, to North County.

“Bridge that gap between what they (businesses) are looking for and local government officials make sure their plans come true,” Lee said. “What you are doing is increasing the economic vitality.” Lee said the organization also recruits members, or otherwise known as investors, to the group to engage in regional and nationwide trends. Also,

the SDNEDC hosts an economic summit each year where speakers discuss economic situations from a global, national, statewide and local perspectives. Along with the summit, the SDNEDC also organizes symposiums and monthly meetings with speakers. Lee said North County’s economic status is strong and growing and with it, the SDNEDC looks to build on the foundation and foster those businesses. Lee said one of the priorities of the nonprofit is to find and generate more affordable housing near transit centers. “That’s the future of North County as we look into the future,” he added. “How can we have the smart growth … people need to have affordable housing and live near transit centers to move around.” The regions largest industry clusters, meanwhile, include connected tourism, healthcare, biomedical, biotech, sports and active lifestyle. However, Lee said the recent explosion of craft brewers in North County is one of the fastest growing industries in the region. “It’s just been exponential growth,” Lee said. “They call the 78 the ‘Hops Highway.’ That’s a perfect of a small industry that has been growing and growing.”