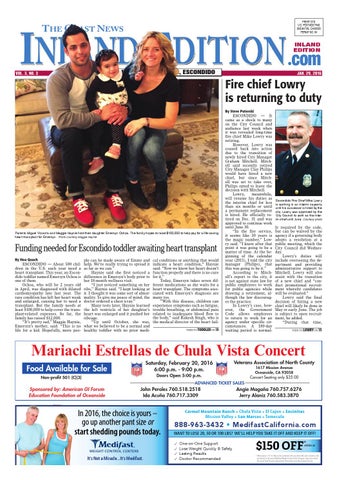 Fire chief Lowry is returning to duty By Steve Puterski

ESCONDIDO — About 500 children in the U.S. each year need a heart transplant. This year, an Escondido toddler named Emersyn Ochoa is one of them. Ochoa, who will be 2 years old in April, was diagnosed with dilated cardiomyopathy late last year. The rare condition has left her heart weak and enlarged, causing her to need a transplant. But the family needs at least $100,000 to help cover the transplant-related expenses. So far, the family has raised $12,000. “It’s pretty sad,” Maggie Haynie, Emersyn’s mother, said. “This is no life for a kid. Hopefully, more peo-

ple can be made aware of Emmy and help. We’re really trying to spread it as far as we can.” Haynie said she first noticed a difference in Emersyn’s body prior to her 18-month wellness visit. “I just noticed something on her ribs,” Haynie said. “I kept looking at it. I thought it was some sort of abnormality. To give me peace of mind, the doctor ordered a chest x-ray.” Many tests later, Haynie learned the left ventricle of her daughter’s heart was enlarged and it pushed her ribcage. “Up until October, she was, what we believed to be a normal and healthy toddler with no prior medi-

cal conditions or anything that would indicate a heart condition,” Haynie said. “Now we know her heart doesn’t function properly and there is no cure for it.” Today, Emersyn takes seven different medications as she waits for a heart transplant. The symptoms associated with Emersyn’s diagnosis are many too. “With this disease, children can experience symptoms such as fatigue, trouble breathing, or abdominal pain related to inadequate blood flow to the body,” said Rakesh Singh, who is the medical director of the heart failTURN TO TODDLER ON 15

ESCONDIDO — It came as a shock to many on the City Council and audience last week when it was revealed long-time fire chief Mike Lowry was retiring. However, Lowry was coaxed back into action due to the transition of newly hired City Manager Graham Mitchell. Mitchell said recently retired City Manager Clay Philips would have hired a new chief, but since Mitchell was set to take over, Philips opted to leave the decision with Mitchell. Lowry, meanwhile, will resume his duties as the interim chief for less than six months or until a permanent replacement is hired. He officially retired on Dec. 31 and was approved to continue work until June 30. “In the fire service, it seems like 30 years is the magic number,” Lowry said. “I knew after that point it was going to be a matter of time. At the beginning of the calendar year (2015), I told the city manager (Philips), that this was going to be it.” According to Mitchell’s report to the city, it is not against state law for public employees to work for public agencies while drawing a retirement, although the law discourages the practice. In Lowry’s case, however, the Government Code allows employees to return to work for an agency under specific circumstances. A 180-day waiting period is normal-

Escondido Fire Chief Mike Lowry is working in an interim capacity until his successor is hired by the city. Lowry was approved by the City Council to work as the interim chief until June. Courtesy photo

ly required by the code, but can be waived by the agency if a governing body adopts a resolution at a public meeting, which the City Council did Wednesday. Lowry’s duties will include overseeing the department and providing administrative support to Mitchell. Lowry will also assist with the transition of a new chief and “conduct promotional recruitment whereby candidates will be evaluated.” Lowry said the final decision of hiring a new chief will likely be done in May or early June. The job is subject to open recruitment, he added. “During that time, TURN TO LOWRY ON 15