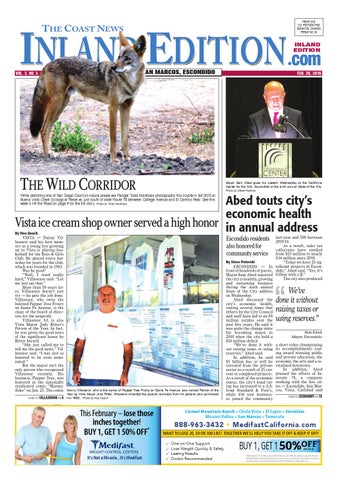 Mayor Sam Abed gives his speech Wednesday at the California Center for the Arts, Escondido at the sixth annual State of the City.

VISTA — Danny Villasenor said his best memory as a young boy growing up in Vista is playing basketball for the Boys &amp; Girls Club. He played every Saturday for years for the club, which was founded in 1963. Was he good? “Well, I tried really hard,” Villasenor said. “Let me just say that.” More than 50 years later, Villasenor doesn’t just try — he gets the job done. Villasenor, who owns the beloved Pepper Tree Frosty on Santa Fe Avenue, is the chair of the board of directors for the nonprofit. Villasenor, 63, is also Vista Mayor Judy Ritter’s Person of the Year. In fact, he was given the good news of the significant honor by Ritter herself. “She just called me to tell me the good news,” Villasenor said. “I was just so honored to be even nominated.” But the mayor isn’t the only person who recognized Villasenor recently. His business, Pepper Tree, was featured in the nationally syndicated comic “Marmaduke” on Jan. 25. The comic Danny Villasenor, who is the owner of Pepper Tree Frosty on Santa Fe Avenue, was named Person of the TURN TO VILLASENOR ON 6

Year by Vista Mayor Judy Ritter. Villasenor inherited the popular business from his parents who purchased it in 1960. Photo by Hoa Quack

ESCONDIDO — In front of hundreds of guests, Mayor Sam Abed reported the city is healthy, growing and sustaining business during the sixth annual State of the City address on Wednesday. Abed discussed the city’s economic health, stating several times that efforts by the City Council and staff have led to an $8 million surplus over the past five years. He said it was quite the change since his becoming mayor in 2010 when the city held a $16 million deficit. “We’ve done it without raising taxes or using reserves,” Abed said. In addition, he said $1 billion has or will be invested from the private sector as a result of 25 current or completed projects. As a result of the economic status, the city’s bond rating has increased to a AAfrom Standard &amp; Poor’s, while 450 new businesses joined the community

a short video championing its accomplishments touting award winning public and private education, the economy, the arts and a revitalized downtown. In addition, Abed praised the efforts of Innovate 78, a company working with the five cities — Escondido, San Marcos, Vista, Carlsbad and TURN TO ECONOMY ON 15