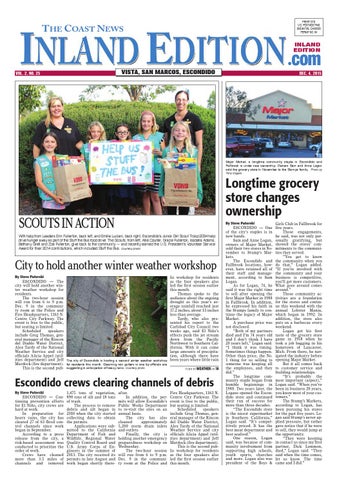 Major Market, a longtime community staple in Escondido and Fallbrook is under new ownership. Owners Sam and Anne Logan sold the grocery store in November to the Stumps family. Photo by

With help from Leaders Erin Fullerton, back left, and Emilie Luciani, back right, Escondido’s Junior Girl Scout Troop 2034 help drive hunger away as part of the Stuff the Bus food drive. The Scouts, from left, Allie Coulter, Gracie Fullerton, Isabella Adams, Bethany Grell and Zoe Fullerton, give back to the community — and recently earned the U.S. President’s Volunteer Service Award for their 2014 contributions, which included Stuff the Bus. Courtesy photo

City to hold another winter weather workshop By Steve Puterski

ESCONDIDO — The city will hold another winter weather workshop for residents. The two-hour session will run from 6 to 9 p.m. Dec. 9 in the community room at the Police and Fire Headquarters, 1163 N. Centre City Parkway. The event is free to the public, but seating is limited. Scheduled speakers include Greg Thomas, general manager of the Rincon del Diablo Water District, Alex Tardy of the National Weather Service and city officials Alicia Appel (utilities department) and Jeff The city of Escondido is hosting a second winter weather workshop Murdock (fire department). for residents this month. Clearning rain gutters is one tip officials are This is the second pub- suggesting in anticipation of heavy rains. Courtesy photo

lic workshop for residents as the four speakers also led the first session earlier this month. Thomas spoke to the audience about the ongoing drought as this year’s average rainfall reached just 37.2 inches, about 13 inches less than average. Tardy, who also presented his report to the Carlsbad City Council two weeks ago, said El Niño’s effects push the jet stream down from the Pacific Northwest to Southern California. With it can come large amounts of precipitation, although there have been years where little rain TURN TO WEATHER ON 18

ESCONDIDO — Continuing prevention efforts for El Niño, city crews are hard at work. In preparation for heavy rains, the city has cleared 27 of 63 flood control channels since work began in September. According to a press release from the city, a risk-based assessment was conducted to prioritize the order of work. Crews have cleaned more than 3.5 miles of channels and removed

1,475 tons of vegetation, 890 tons of silt and 18 tons of trash. The process to remove debris and silt began in 2010 when the city started collecting data to obtain the permits. Applications were submitted to the California Department of Fish and Wildlife, Regional Water Quality Control Board and U.S. Army Corps of Engineers in the summer of 2013. The city received its permits in late August and work began shortly there-

after. In addition, the permits will allow Escondido’s Public Works Department to re-visit the sites on an annual basis. The city has also cleaned approximately 5,200 storm drain inlets and outlets. Finally, the city is holding another emergency preparedness workshop on Wednesday. The two-hour session will run from 6 to 9 p.m. Dec. 9 in the community room at the Police and

Fire Headquarters, 1163 N. Centre City Parkway. The event is free to the public, but seating is limited. Scheduled speakers include Greg Thomas, general manager of the Rincon del Diablo Water District, Alex Tardy of the National Weather Service and city officials Alicia Appel (utilities department) and Jeff Murdock (fire department). This is the second public workshop for residents as the four speakers also led the first session earlier this month.

ESCONDIDO — One of the city’s staples is in new hands. Sam and Anne Logan, owners of Major Market, sold their two stores in November to Stump’s Markets. The Escondido and Fallbrook locations, however, have retained all of their staff and management, according to Sam Logan. As for Logan, 74, he said it was the right time to sell after opening the first Major Market in 1988 in Fallbrook. In addition, he expressed his faith in the Stumps family to continue the legacy of Major Market. A purchase price was not disclosed. “Both of my partners died and I’m 74 years old and I don’t think I have 20 years left,” Logan said. “I think it was timing. Sometimes things happen. Other than price, the No. 1 thing for us selling to someone was keeping all the employees, and they did.” The longtime community staple began from humble beginnings in 1988. Two years later, the Logans opened the Escondido store and continued their run of success for more than three decades. “The Escondido store is the nicest supermarket in Southern California,” Logan said. “It’s competitively priced. It has the best meat department and best seafood.” One reason, Logan said, was because of community involvement from supporting high schools, youth sports, churches and more. Logan also was president of the Boys &amp;

Girls Club in Fallbrook for five years. Those engagements, he said, was not only personally gratifying, but showed the stores’ commitments to the communities they served. “You get to know the community when you do that,” Logan added. “If you’re involved with the community and your business is competitive, you’ll get more customers. What goes around comes around.” Those community activities are a foundation for the stores and continue this weekend with the annual Lobster Mania, which began in 1992. In addition, the store also puts on a barbecue every weekend. Logan got his first taste of the grocery store game in 1958 when he took a job bagging in his hometown of Lancaster, Mich. From there, he navigated the industry before opening Major Market. But it all comes back to customer service and building relationships. “It’s probably the most important (aspect),” Logan said. “When you’ve been in business 20 years, you know most of your customers.” The Stump’s Markets, according to Logan, has been pursuing his stores for the past five years. Logan said Stump’s never applied pressure, but rather gave notice that if he were to sell, they would jump at the opportunity. “They were keeping in contact us since my first partner, Dick Lemmon, died,” Logan said. “They said when the time comes, let us know. The time came and I did.”