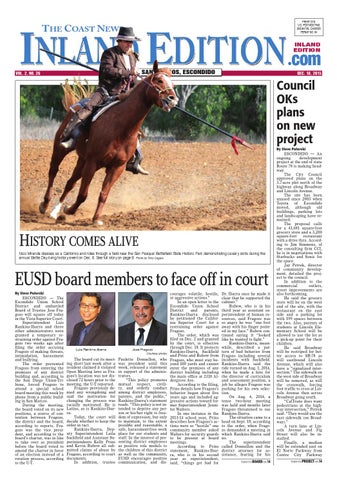 Dr. Ibarra once he made it clear that he supported the cabinet.” Rubow, who is in his third year as assistant superintendent of human resources, said Fragozo was so angry he was “one foot away with his finger pointed in my face.” Rubow continued saying it “looked like he wanted to fight.” Rankins-Ibarra, meanwhile, described a pattern of bad behavior from Fragozo including several incidents with Sackfield. Rankins-Ibarra said the tide turned on Aug. 1, 2014, when he made a hire for the director of curriculum and assessment position, a job he alleges Fragozo was pushing for his own selection. On Aug. 4, 2014, a tense two-hour meeting was held and months later Fragozo threatened to sue Rankins-Ibarra. The situation came to a head on Sept. 18, according to the order, when Fragozo demanded a meeting in which Rankins-Ibarra said no. The superintendent called Donnellon and the district attorney for assistance, fearing for his

ESCONDIDO — An ongoing development project at the end of state Route 78 is making headway. The City Council approved plans on the 3.7-acre plot north of the highway along Broadway and Lincoln Avenue. The site has been unused since 2003 when Toyota of Escondido moved, although old buildings, parking lots and landscaping have remained. The proposal calls for a 43,681 square-foot grocery store and a 3,200 square-foot restaurant with a drive thru. According to Jim Simmons, of the consulting firm CCI, he is in negotiations with Starbucks and Sonic for the space. Jay Petrek, director of community development, detailed the project to the council. In addition to the commercial outlets, street improvements are also forthcoming. He said the grocery store will be on the west end of the site, with the restaurant on the east side and a parking lot with 199 spaces between the two. Also, parents of students at Lincoln Elementary School will be allowed to use the lot as a pick-up point for their children. He said Broadway will be restriped for better access to SR-78 as will eastbound Lincoln Avenue, which will also have a “signalized intersection.” The sidewalk on the west side of Broadway will be removed, as will the crosswalk, forcing foot traffic to cross at Lincoln Avenue then across Broadway going south. “CalTrans does want pedestrians at the highway intersection,” Petrek said. “They would use the east sidewalk (on Broadway).” A turn lane at Lincoln Avenue and Fig Street will also be installed. Finally, a median will be extended east on El Norte Parkway from Centre City Parkway

TURN TO PROJECT ON 14

EUSD board members to face off in court By Steve Puterski

ESCONDIDO — The Escondido Union School District and embattled Board of Trustee Jose Fragozo will square off today in the Vista Superior Court. Superintendent Luis Rankins-Ibarra and three other administrators were granted a temporary restraining order against Fragozo two weeks ago after filing the order accusing Fragozo of making threats, intimidation, harassment and bullying. The order prevented Fragozo from entering the premises of any district building and, according to the San Diego Union-Tribune, forced Fragozo to attend a special school board meeting this week by phone from a public building in San Marcos. During the meeting, the board voted on its new positions, a source of contention between Fragozo, the district and the board, according to reports. Fragozo was the vice president, and according to the board’s charter, was in line to take over as president before the board voted to amend the charter in favor of an election instead of a rotation process, according to the U-T.

The board cut its meeting short last week after a resident claimed it violated Open Meeting laws as Fragozo’s location was not disclosed 72 hours prior to the meeting, the U-T reported. Fragozo previously denied any wrongdoing and said the motivation for changing the process was racially motivated. He is Latino, as is Rankins-Ibarra. Today, the court will decide whether to keep the order in tact. Rankins-Ibarra, Deputy Superintendent Leila Sackfield and Assistant Superintendents Kelly Prins and Kevin Rubow all submitted claims of abuse by Fragozo, according to court documents. In addition, trustee

Paulette Donnellon, who was president until this week, released a statement in support of the administrators. “This policy promotes mutual respect, civility, and orderly conduct among district employees, parents, and the public,” Rankins-Ibarra’s statement reads. “This policy is not intended to deprive any person or his/her right to freedom of expression, but only to maintain, to the extent possible and reasonable, a safe, harassment-free work place for our students and staff. In the interest of presenting district employees as positive role models to the children of this district as well as the community, EUSD encourages positive communication, and dis-

courages volatile, hostile, or aggressive actions.” In an open letter to the Escondido Union School District and parents, Rankins-Ibarra disclosed he petitioned the California Superior Court for a restraining order against Fragozo. The order, which was filed on Dec. 2 and granted by the court, is effective through Dec. 18. It protects Rankins-Ibarra, Sackfield and Prins and Rubow from Fragozo, who must stay beyond 100 yards and cannot enter the premises of any district building including the main office at 2310 Aldergrove Ave. According to the filing, Prins details how Fragozo’s behavior began about five years ago and included aggressive actions toward former Superintendent Jennifer Walters. In one instance in the 2013-14 school year, Prins describes how Fragozo’s actions were so “hostile” one community member asked Walters for security guards to be present at board meetings. According to Prins statement, Rankins-Ibarra, who is in his second year as superintendent, said, “things got bad for