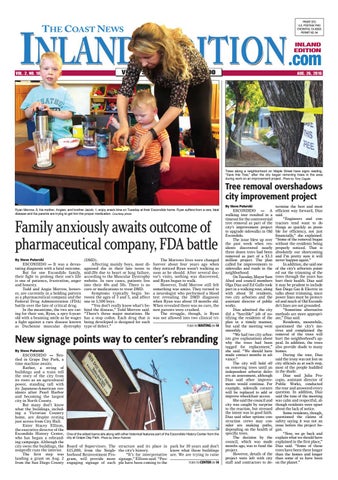 Trees along a neighborhood on Maple Street have signs reading, “Save this Tree,” after the city began removing trees in the area during work on an improvement project. Photo by Tony Cagala

Tree removal overshadows city improvement project Ryan Morrow, 6, his mother, Angies, and brother Jacob, 1, enjoy snack time on Tuesday at their Escondido home. Ryan suffers from a rare, fatal disease and his parents are trying to get him the proper medication. Courtesy photo

ESCONDIDO — It was a devastating diagnosis with a fatal outcome. But for one Escondido family, their fight to prolong their son’s life is one of patience, frustration, anger and honesty. Todd and Angie Morrow, however, are currently in a holding pattern as a pharmaceutical company and the Federal Drug Administration (FDA) battle over the fate of critical drug. In the meantime, the two are caring for their son, Ryan, a spry 6-yearold with a beaming smile as he wages a fight against a rare disease known as Duchenne muscular dystrophy

(DMD). Affecting mainly boys, most diagnosed die in their late teens to mid-20s due to heart or lung failure, according to the Muscular Dystrophy website. In rare cases, patients live into their 40s and 50s. There is no cure or medications to treat DMD. Symptoms typically begin between the ages of 3 and 5, and affect one in 3,500 boys. “You don’t really know what’s behind the disease,” Todd Morrow said. “There’s three major mutations. He has a stop codon. Each drug that is being developed is designed for each type of defect.”

The Morrows lives were changed forever about four years ago when they noticed Ryan wasn’t walking as soon as he should. After several doctor’s visits, nothing was discovered, and Ryan began to walk. However, Todd Morrow still felt something was amiss. They turned to a neurologist who performed a blood test revealing the DMD diagnosis when Ryan was about 18 months old. When revealed there was no cure, the new parents were crushed. The struggle, though, is Ryan was not allowed into two clinical triTURN TO WAITING ON 14

ESCONDIDO — Nestled in Grape Day Park, a time machine awaits. Rather, a string of buildings and a train tell the story of the city from its roots as an agricultural power, standing tall with its Japanese-American residents after Pearl Harbor and becoming the largest city in North County. But many don’t know what the buildings, including a Victorian Country home, are despite resting just across from City Hall. Enter Stacey Ellison, the executive director of the Escondido History Center, who has begun a rebranding campaign. Although the city owns the buildings, the nonprofit runs the interior. The first step was landing a grant on Aug. 2 from the San Diego County

One of the oldest barns sits along with other historical features part of the Escondido History Center from the city at Grape Day Park. Photo by Steve Puterski

Board of Supervisors. The $15,000, from the Neighborhood Reinvestment Program, will provide more engaging signage of each

structure and its place in park for 30 years and don’t know what these buildings the city’s history. “It’s for interpretative are. We are trying to raise signage,” Ellison said. “PeoTURN TO CENTER ON 14 ple have been coming to the

ESCONDIDO — A walking tour resulted in a timeout for the controversial tree removal as part of the city’s improvement project to upgrade sidewalks in Old Escondido. The issue blew up over the past week when residents discovered nearly three dozen trees had been removed as part of a $3.3 million project. The plan called for improvements to sidewalks and roads in the neighborhood. On Tuesday, Mayor Sam Abed and council members Olga Diaz and Ed Gallo took part in a walking tour, along with about 50 residents, two city arborists and the assistant director of public works. Diaz admitted the city did a “horrible” job of notifying the residents of the plan in a timely manner, but said the meeting went smoothly. “We had two city arborists give explanations about why the trees had been tagged for replacement,” she said. “We should have made contact months in advance.” The city will hold off on removing trees until an independent arborist delivers an assessment, although Diaz said other improvements would continue. For example, sidewalk corners will be replaced to add or improve wheelchair access. She said the council and city was caught by surprise to the reaction, but stressed the intent was in good faith. Diaz said other options construction crews may consider are snaking paths, depending on the health of specific trees. The decision by the council, which was made months ago, was to fund the project. However, details of the project were left with city staff and contractors to de-

termine the best and most efficient way forward, Diaz said. “Engineers and contractors tend want to do things as quickly as possible for efficiency, not just financially,” she explained. “Some of the removal began without the residents being properly noticed. That is absolutely our shortcoming and I’m pretty sure it will never happen again.” In addition, she said one of the city’s arborists pointed out the trimming of the trees through the years has hurt their health. Diaz said it may be prudent to include San Diego Gas &amp; Electric in talks about trimming, since power lines must be protected and much of Old Escondido’s lines are not grounded. “Sometime alternative methods are more appropriate,” Diaz said. Residents, meanwhile, questioned the city’s motives and complained the removal of the trees will hurt the neighborhood’s appeal. In addition, the trees also provide shade to many homes. During the tour, Diaz said the irony was not lost on city officials as at each stop, most of the people huddled in the shade. Diaz said Julia Procopio, assistant director of Public Works, conducted the tour and answered every question. In addition, Diaz said the tone of the meeting was calm and respectful, although residents were upset about the lack of notice. Some residents, though, questioned the claims of safety saying it was not an issue before the project began. “Now, we go back and explain what we should have explained in the first place,” Diaz said. “Some of these trees have been there longer than the homes and longer than some of us have been on the planet.”