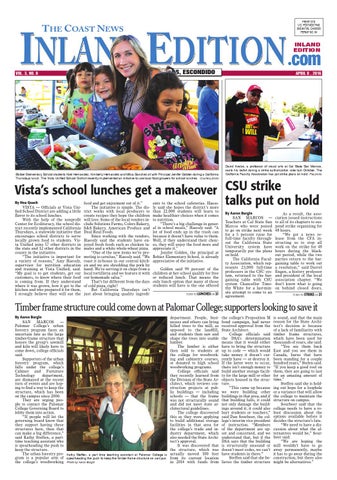 VISTA — Officials at Vista Unified School District are adding a little flavor to its school lunches. With the help of the nonprofit Center for Ecoliteracy, the school district recently implemented California Thursdays, a statewide initiative that encourages school districts to serve locally grown food to students. Vista Unified joins 57 other districts in the state and 12 other districts in the county in the initiative. “The initiative is important for a variety of reasons,” Amy Haessly, supervisor for nutrition education and training at Vista Unified, said. “My goal is to get students, get our customers, to know where their food is coming from. If they understand where it was grown, how it got to the kitchen and who prepared it for them, I strongly believe they will eat the

food and get enjoyment out of it.” The initiative is simple. The district works with local producers to create recipes they hope the children will love. Some of the local vendors include Solutions Farms, Colors Bakery, S&amp;S Bakery, American Produce and Deal Real Foods. Since working with the vendors, Haessly said the students have enjoyed fresh foods such as chicken tamales and a white whole-wheat pizza. “One of the new items we’re promoting is carnitas,” Haessly said. “We roast it in-house in our central kitchen and we are shredding the pork by hand. We’re serving it on chips from a local tortilleria and we feature it with our homemade salsa.” That’s far different from the days of cold pizza, right? But California Thursdays isn’t just about bringing quality ingredi-

ents to the school cafeterias. Haessly said she hopes the district’s more than 22,000 students will learn to make healthier choices when it comes to nutrition. “There’s a big challenge in general in school meals,” Haessly said. “A lot of food ends up in the trash can because it doesn’t have value to them. Well, if they understand their choices, they will enjoy the food more and appreciate it.” Jenifer Golden, the principal at Bobier Elementary School, is already appreciative of the initiative.

Golden said 99 percent of the children at her school qualify for free or reduced lunch. That means the only lunch option that many of those students will have is the one offered TURN TO LUNCHES ON 21

SAN MARCOS — Teachers at Cal State San Marcos who were poised to go on strike next week for a 5 percent raise for full-time faculty throughout the California State University system have temporarily put the plans on hold. The California Faculty Association, which represents 23,000 full-time professors in the CSU system, returned to the bargaining table with CSU system Chancellor Timothy White for a last-minute attempt to come to an agreement.

As a result, the association issued instructions to all of its chapters to suspend strike organizing for 48 hours. “We got a news release from the CFA instructing us to stop all work on the strike for 48 hours during the blackout period, while the two parties return to the bargaining table to work out a resolution,” said Darrel Engen, a history professor and president of the local association chapter. “We don’t know what is going on behind closed doors, TURN TO STRIKE ON 21

Timber frame structure could come down at Palomar College; supporters looking to save it By Aaron Burgin

SAN MARCOS — Palomar College’s urban forestry program faces an uncertain fate as the large timber-frame structure that houses the group’s sawmill and kiln will likely have to come down, college officials said. Supporters of the urban forestry program, which falls under the college’s Cabinet and Furniture Technology department, are dismayed at the recent turn of events and are hoping to find a way to keep the structure, which has been on the campus since 2000. They are urging people to contact the Palomar College Governing Board to lobby them into action. “If people will let the governing board know that they support having these structures here, then that can make a big difference,” said Kathy Steffen, a parttime teaching assistant who is spearheading the push to keep the structure. The urban forestry pro- Kathy Steffen, a part time teaching assistant at Palomar College is gram is a popular arm of spearheading the push to keep the timber-frame structure on campus. the college’s woodworking Photo by Aaron Burgin

department. People, businesses and others can bring felled trees to the mill, as opposed to the landfill, and students then saw and shape the trees into usable lumber. The lumber is either then sold to students at the college for woodworking and cabinetry courses, or donated to high school woodworking programs. College officials said they recently learned from the Division of the State Architect, which reviews construction projects at public buildings — including schools — that the frame was not structurally sound and did not meet state architectural guidelines. The college discovered this as they were applying to build additional storage facilities in that area for the college’s trade and industry department, which also needed the State Architect’s approval. It was discovered that the structure, which was actually moved 100 feet from its current location in 2014 with funds from

the college’s Proposition M bond campaign, had never received approval from the State Architect. College officials said the DSA’s determination means that it would either have to bring the structure up to code — which would take money it doesn’t currently have — or destroy it. If the latter were to occur, there isn’t enough money to build another storage facility for the large mill or other objects housed in the structure. “This came up because we were building other buildings in that area, and if that building falls, it could not only damage the buildings around it, it could also hurt students or teachers,” said Dan Sourbeer, the college’s interim vice president of instruction. “Members of the department are upset and concerned, and we understand that, but if the DSA says that the building is structurally unsound or doesn’t meet codes, we can’t have students in there.” Steffen said that she believes the timber structure

is sound, and that the main reason for the State Architect’s decision is because of a lack of familiarity with timber frame structures, which have been used for thousands of years, she said. “You see them back East and you see them in Canada, barns that have been standing for a couple hundred years,” Stefen said. “If you keep a good roof on them, they are going to last for an amazing amount of time.” Steffen said she is holding out hope for a loophole or a variance that will allow the college to maintain the structure on campus. Sourbeer said that the college needs to have a robust discussion about the options available before it decides the structure’s fate. “We need to have a discussion about what the alternatives would be,” Sourbeer said. “We are hoping the mill wouldn’t have to go away permanently, maybe it has to go away during the construction, but there also might be alternatives.”