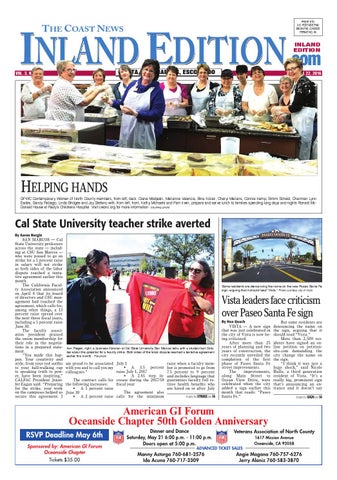 SAN MARCOS — Cal State University professors across the state — including at CSU San Marcos — who were poised to go on strike for a 5 percent raise in salary will not strike as both sides of the labor dispute reached a tentative agreement earlier this month. The California Faculty Association announced on April 8 that its board of directors and CSU management had reached the agreement, which calls for, among other things, a 13 percent raise spread over the next three fiscal years, including a 5 percent raise June 30. The faculty association president praised the union membership for their role in the negotiations in a prepared statement. “You made this happen. Your creativity and style, from your red outfits to your hall-walking rap to speaking truth to power, have been inspiring,” CALFAC President Jennifer Eagan said. “Preparing for the strike, your work on the campuses helped us secure this agreement. I

Some residents are denouncing the name on the new Paseo Santa Fe sign, arguing that it should read “Vista.” Photo courtesy city of Vista

Ann Fiegen, right, a business librarian at Cal State University San Marcos talks with a student last October about the potential for a faculty strike. Both sides of the labor dispute reached a tentative agreement earlier this month. File photo

raise when a faculty member is promoted to go from 7.5 percent to 9 percent and includes language that guarantees faculty full retiree health benefits who are hired on or after July TURN TO STRIKE ON 16

VISTA — A new sign that was just celebrated in the city of Vista is now being criticized. After more than 25 years of planning and two years of construction, the city recently unveiled the completion of the first phase of Paseo Santa Fe street improvements. The improvements, along Main Street to Ocean View Drive, were celebrated when the city added a sign earlier this month that reads: “Paseo Santa Fe.”

But some residents are denouncing the name on the sign, arguing that it should read “Vista.” More than 2,500 residents have signed an online petition on petitionsite.com demanding the city change the name on the sign. “I think it was just a huge shock,” said Nicole Halle, a third generation resident of Vista. “It’s a really big, prominent sign that’s announcing an entrance and it doesn’t say TURN TO SIGN ON 16