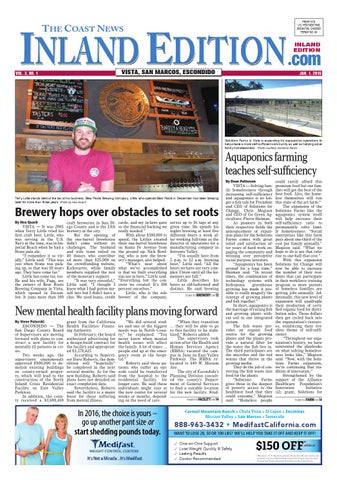 Terry Little stands behind the bar at his business, Bear Roots Brewing Company. Little, who opened Bear Roots in December, has been brewing beer for more than three years. Photo by Hoa Quach

Brewery hops over obstacles to set roots By Hoa Quach

VISTA — It was 2005 when Terry Little tried his first craft beer. Little, who was serving in the U.S. Navy at the time, was in Imperial Beach when he had a Stone pale ale. “I remember it so vividly,” Little said. “This was just when Stone was picking up, so that was 10 years ago. They have come far.” Little has come far, too. He and his wife, Page, are the owners of Bear Roots Brewing Company in Vista, which opened in December. It joins more than 100

craft breweries in San Diego County and is the 13th brewery in the city. But the opening of the one-barrel brewhouse didn’t come without its challenges. The husband and wife team relied on 40 donors who contributed more than $25,000 on the crowdfunding website, Kickstarter, while family members supplied the rest of the monetary support. “It was very stressful,” Little said. “I thought I knew what I had gotten myself into but I didn’t have a clue. We used loans, credit

cards, and my in-laws gave us the financial backing we really needed.” With about $100,000 to spend, the Littles created their one-barrel brewhouse on Santa Fe Avenue from the ground up. Nick Bowling, who is now the brewery’s manager, also helped. “What’s neat about what we’ve accomplished is that we built everything you see in here,” Little said. “Everything but the concrete we created. It’s 100 percent ourselves.” Little, who is the sole brewer of the company,

serves up to 16 taps at any given time. He spends his nights brewing at least five different beers a week after working full-time as the director of operations for a manufacturing company in Sorrento Valley. “I’m usually here from 5 p.m. to 12 a.m. brewing beer,” Little said. “All the beers we have are very complex. I brew until all the fermenters are full.” Little describes his beers as old-fashioned and distinct. He said brewing TURN TO BREWERY ON 12

ESCONDIDO — The San Diego County Board of Supervisors are moving forward with plans to construct a new facility for mentally ill patients in crisis. Two weeks ago, the supervisors unanimously approved $900,000 to demolish existing buildings on county-owned property, which will lead to the construction of the North Inland Crisis Residential Facility on East Valley Parkway. In addition, the county received a $3,688,468

grant from the California Health Facilities Financing Authority. In February, the board authorized advertising for a design-build contract for the facility and appropriated $3,578,425. According to Supervisor Dave Roberts, the demolition will “hopefully” be completed in the next several months. As for the new building, Roberts said plans have not detailed an exact completion date. Nevertheless, Roberts said the facility is a major boost for those suffering from mental illness.

“We did several studies and one of the biggest needs was in North County,” he explained. “You never know when mental health issues will affect the family. A lot of times … people end up at the emergency room at the hospital.” Roberts said those patients who suffer an episode could be transferred from the hospital to the residential facility for longer care. He said those individuals might stay at the new center for several weeks or months, depending on the need of care.

“When they transition … they will be able to go to this facility to be stabilized,” Roberts added. The supervisors took action after the Health and Human Services Agency (HHSA) vacated the campus in June on East Valley Parkway. The HHSA relocated to 649 W. Mission Ave. The city of Escondido’s Planning Division consulted the county’s Department of General Services to find a suitable location for the new facility. StudTURN TO FACILITY ON 14

VISTA — Solving family homelessness through increasing self-sufficiency and aquaponics is no longer a fish tale for President and CEO of Solutions for Change, Chris Megison and CEO of Go Green Agriculture, Pierre Sleiman. As pioneers in both their respective fields the announcement of expansion plans for the Solutions Farms comes with great relief and satisfaction after years of hard work engaging the community and winning over perceptive social purpose investors. “Aquaponics has been around for a long time,” Sleiman said. “In recent times, the combination of technology systems with hydroponic greenhouse growing has made it possible to really magnify the synergy of growing plants and fish together.” In short, aquaponics is the marriage of raising fish and growing plants without soil in one integrated system. The fish waste provides an organic food source for the growing plants and the plants provide a natural filter for the water the fish live in. The third participants are the microbes and the red worms that thrive in the growing media. They do the job of converting the fish waste into food for the plants. “Solutions Farms gives those in the deepest of poverty access to the healthiest food that they could consume,” Megison said. “Homeless people

could rarely afford this premium food but our families will get the best of the best food. Also, the homeless themselves will run this state of the art farm.” The expansion of the Solutions Farms like the aquaponics system itself will help increase their self-sufficiency ratio to permanently solve family homelessness. “Social enterprises like this farm pays about one-third of the cost per family annually,” Megison said. “What we hope to do is see that ratio rise to one-half that cost.” With this expansion Solutions for Change will now be able to increase the number of their residents that can participate in their workforce training program so more parents of homeless families are getting jobs annually. Additionally, this new level of expansion will quadruple their production of certified organic food for distribution sales. Those dollars then get cycled back into the organization’s resources, reinforcing their resolute theme of self-sufficiency. “Throughout our organization’s history, we have reinvented the playbooks on what solving homelessness looks like,” Megison said. “Now, with the Solutions Farms expansion, we’re continuing that tradition of innovation.” Strengthened by the support of the Alliance Healthcare Foundation’s Innovation Initiative (i2) grant, Solutions for TURN TO FARM ON 14