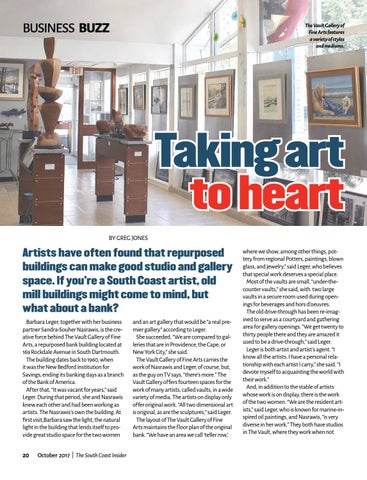 The Vault Gallery of Fine Arts features a variety of styles and mediums.

Artists have often found that repurposed buildings can make good studio and gallery space. If you’re a South Coast artist, old mill buildings might come to mind, but what about a bank? Barbara Leger, together with her business partner Sandra-Souher Nasrawis, is the creative force behind The Vault Gallery of Fine Arts, a repurposed bank building located at 169 Rockdale Avenue in South Dartmouth. The building dates back to 1960, when it was the New Bedford Institution for Savings, ending its banking days as a branch of the Bank of America. After that, “It was vacant for years,” said Leger. During that period, she and Nasrawis knew each other and had been working as artists. The Nasrawis’s own the building. At first visit,Barbara saw the light, the natural light in the building that lends itself to provide great studio space for the two women

and an art gallery that would be “a real premier gallery” according to Leger. She succeeded. “We are compared to galleries that are in Providence, the Cape, or New York City,” she said. The Vault Gallery of Fine Arts carries the work of Nasrawis and Leger, of course, but, as the guy on TV says, “there’s more.” The Vault Gallery offers fourteen spaces for the work of many artists, called vaults, in a wide variety of media. The artists on display only offer original work. “All two dimensional art is original, as are the sculptures,” said Leger. The layout of The Vault Gallery of Fine Arts maintains the floor plan of the original bank. “We have an area we call ‘teller row,’

where we show, among other things, pottery from regional Potters, paintings, blown glass, and jewelry,” said Leger, who believes that special work deserves a special place. Most of the vaults are small, “under-thecounter vaults,” she said, with two large vaults in a secure room used during openings for beverages and hors d’oeuvres. The old drive-through has been re-imagined to serve as a courtyard and gathering area for gallery openings. “We get twenty to thirty people there and they are amazed it used to be a drive-through,” said Leger. Leger is both artist and artist’s agent. “I know all the artists. I have a personal relationship with each artist I carry,” she said. “I devote myself to acquainting the world with their work.” And, in addition to the stable of artists whose work is on display, there is the work of the two women. “We are the resident artists,” said Leger, who is known for marine-inspired oil paintings, and Nasrawis, “is very diverse in her work.” They both have studios in The Vault, where they work when not 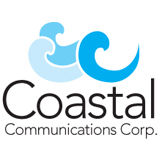 Welcome to sweater weather! Just like the trees, we’re changing our outfits and getting ready for the coming months. There’s plenty to celeb...

Welcome to sweater weather! Just like the trees, we’re changing our outfits and getting ready for the coming months. There’s plenty to celeb...