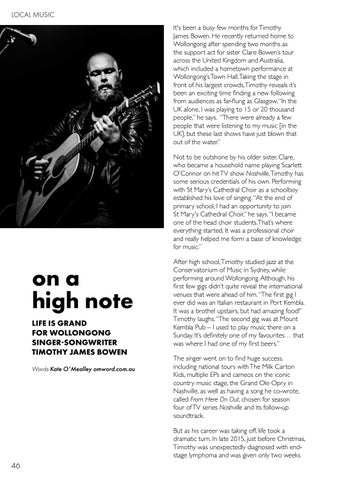 LOCAL MUSIC It's been a busy few months for Timothy James Bowen. He recently returned home to Wollongong after spending two months as the support act for sister Clare Bowen’s tour across the United Kingdom and Australia, which included a hometown performance at Wollongong’s Town Hall. Taking the stage in front of his largest crowds, Timothy reveals it’s been an exciting time finding a new following from audiences as far-flung as Glasgow, “In the UK alone, I was playing to 15 or 20 thousand people,” he says. “There were already a few people that were listening to my music [in the UK], but these last shows have just blown that out of the water.” Not to be outshone by his older sister, Clare, who became a household name playing Scarlett O'Connor on hit TV show Nashville, Timothy has some serious credentials of his own. Performing with St Mary’s Cathedral Choir as a schoolboy established his love of singing. “At the end of primary school, I had an opportunity to join St Mary's Cathedral Choir,” he says. “I became one of the head choir students. That’s where everything started. It was a professional choir and really helped me form a base of knowledge for music.”

After high school, Timothy studied jazz at the Conservatorium of Music in Sydney, while performing around Wollongong. Although, his first few gigs didn’t quite reveal the international venues that were ahead of him. “The first gig I ever did was an Italian restaurant in Port Kembla. It was a brothel upstairs, but had amazing food!” Timothy laughs. “The second gig was at Mount Kembla Pub – I used to play music there on a Sunday. It’s definitely one of my favourites… that was where I had one of my first beers.” The singer went on to find huge success, including national tours with The Milk Carton Kids, multiple EPs and cameos on the iconic country music stage, the Grand Ole Opry in Nashville, as well as having a song he co-wrote, called From Here On Out, chosen for season four of TV series Nashville and its follow-up soundtrack. But as his career was taking off, life took a dramatic turn. In late 2015, just before Christmas, Timothy was unexpectedly diagnosed with endstage lymphoma and was given only two weeks