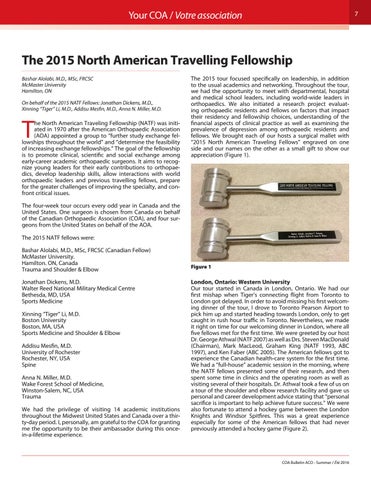 he North American Traveling Fellowship (NATF) was initiated in 1970 after the American Orthopaedic Association (AOA) appointed a group to “further study exchange fellowships throughout the world” and “determine the feasibility of increasing exchange fellowships.” The goal of the fellowship is to promote clinical, scientific and social exchange among early-career academic orthopaedic surgeons. It aims to recognize young leaders for their early contributions to orthopaedics, develop leadership skills, allow interactions with world orthopaedic leaders and previous travelling fellows, prepare for the greater challenges of improving the specialty, and confront critical issues.

The 2015 tour focused specifically on leadership, in addition to the usual academics and networking. Throughout the tour, we had the opportunity to meet with departmental, hospital and medical school leaders, including world-wide leaders in orthopaedics. We also initiated a research project evaluating orthopaedic residents and fellows on factors that impact their residency and fellowship choices, understanding of the financial aspects of clinical practice as well as examining the prevalence of depression among orthopaedic residents and fellows. We brought each of our hosts a surgical mallet with “2015 North American Traveling Fellows” engraved on one side and our names on the other as a small gift to show our appreciation (Figure 1).

The four-week tour occurs every odd year in Canada and the United States. One surgeon is chosen from Canada on behalf of the Canadian Orthopaedic Association (COA), and four surgeons from the United States on behalf of the AOA. The 2015 NATF fellows were: Bashar Alolabi, M.D., MSc, FRCSC (Canadian Fellow) McMaster University. Hamilton. ON, Canada Trauma and Shoulder & Elbow Jonathan Dickens, M.D. Walter Reed National Military Medical Centre Bethesda, MD, USA Sports Medicine Xinning “Tiger” Li, M.D. Boston University Boston, MA, USA Sports Medicine and Shoulder & Elbow Addisu Mesfin, M.D. University of Rochester Rochester, NY, USA Spine Anna N. Miller, M.D. Wake Forest School of Medicine, Winston-Salem, NC, USA Trauma We had the privilege of visiting 14 academic institutions throughout the Midwest United States and Canada over a thirty-day period. I, personally, am grateful to the COA for granting me the opportunity to be their ambassador during this oncein-a-lifetime experience.

London, Ontario: Western University Our tour started in Canada in London, Ontario. We had our first mishap when Tiger’s connecting flight from Toronto to London got delayed. In order to avoid missing his first welcoming dinner of the tour, I drove to Toronto Pearson Airport to pick him up and started heading towards London, only to get caught in rush hour traffic in Toronto. Nevertheless, we made it right on time for our welcoming dinner in London, where all five fellows met for the first time. We were greeted by our host Dr. George Athwal (NATF 2007) as well as Drs. Steven MacDonald (Chairman), Mark MacLeod, Graham King (NATF 1993, ABC 1997), and Ken Faber (ABC 2005). The American fellows got to experience the Canadian health-care system for the first time. We had a “full-house” academic session in the morning, where the NATF fellows presented some of their research, and then spent some time in clinics and the operating room as well as visiting several of their hospitals. Dr. Athwal took a few of us on a tour of the shoulder and elbow research facility and gave us personal and career development advice stating that “personal sacrifice is important to help achieve future success.” We were also fortunate to attend a hockey game between the London Knights and Windsor Spitfires. This was a great experience especially for some of the American fellows that had never previously attended a hockey game (Figure 2). 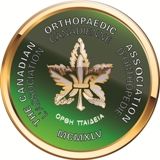 The Summer edition of the COA Bulletin

The Summer edition of the COA Bulletin