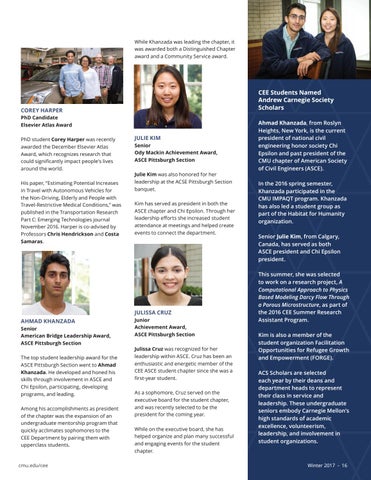 While Khanzada was leading the chapter, it was awarded both a Distinguished Chapter award and a Community Service award.

JULISSA CRUZ AHMAD KHANZADA Senior American Bridge Leadership Award, ASCE Pittsburgh Section The top student leadership award for the ASCE Pittsburgh Section went to Ahmad Khanzada. He developed and honed his skills through involvement in ASCE and Chi Epsilon, participating, developing programs, and leading. Among his accomplishments as president of the chapter was the expansion of an undergraduate mentorship program that quickly acclimates sophomores to the CEE Department by pairing them with upperclass students.

Ahmad Khanzada, from Roslyn Heights, New York, is the current president of national civil engineering honor society Chi Epsilon and past president of the CMU chapter of American Society of Civil Engineers (ASCE). In the 2016 spring semester, Khanzada participated in the CMU IMPAQT program. Khanzada has also led a student group as part of the Habitat for Humanity organization. Senior Julie Kim, from Calgary, Canada, has served as both ASCE president and Chi Epsilon president. This summer, she was selected to work on a research project, A Computational Approach to Physics Based Modeling Darcy Flow Through a Porous Microstructure, as part of the 2016 CEE Summer Research Assistant Program. Kim is also a member of the student organization Facilitation Opportunities for Refugee Growth and Empowerment (FORGE). ACS Scholars are selected each year by their deans and department heads to represent their class in service and leadership. These undergraduate seniors embody Carnegie Mellon’s high standards of academic excellence, volunteerism, leadership, and involvement in student organizations.

Embracing the Spirit of Service 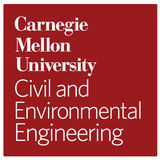