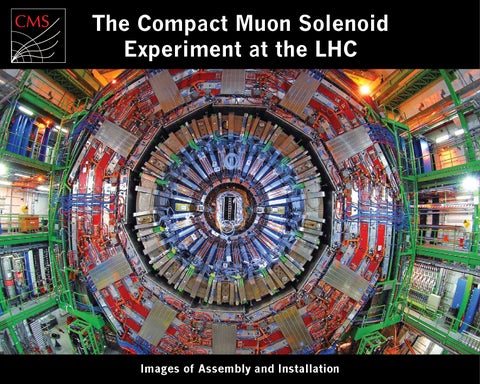 The Compact Muon Solenoid Experiment at the LHC

Images of Assembly and Installation

Foreword The images in this book illustrate the assembly, installation and commissioning of the CMS detector. They cover the activities at Point 5 in Cessy, France, between 1998 and 2008. CMS is one of the most complex scientific instruments ever built. It has taken about 20 years to go from conceptual design to the completion of construction of the CMS detector for the LHC start-up in September 2008. Accomplishing this has required the talents, efforts and resources of over 2500 scientists and engineers from about 180 institutions in 38 countries. Numerous technical, industrial and financial challenges were successfully overcome. The detector is performing well and fulfilling the specifications set out in the Technical Design Reports submitted some ten years ago. The book is dedicated to all of the many people, including their funding agencies, who have contributed to the successful construction of CMS. Tejinder S. Virdee CMS Spokesperson

Aerial view of the Point 5 site in 1998 (left). The foundations of a Roman farm from the 4th century AD can be seen top-centre. Roman coins (bottom) minted in Ostia, London and Lyon between 309 and 315 AD found during archeological excavations at Point 5 (top). Aerial view of point 5 in 2000 (facing page). The large surface building and the main experiment shaft can be clearly seen. A smaller shaft to the left of the main shaft can just be seen.

Fast flowing underground water made the excavation of the shaft of the CMS cavern very difficult. Liquid nitrogen, supplied via a ring of pipes (top), was used to create a cylinder of ice inside which the shaft was excavated (bottom and right) and lined with concrete. The facing page shows the floor of the experiment cavern under construction; the accelerator tunnel can be seen in top-centre.

14 | Assembly on the Surface | The Magnet Iron Yoke

The assembly of the iron magnet yoke: the first of five barrel ‘wheels’ with the ‘ferris wheel’ holding structure in grey (left), the first disk of the endcap being assembled (top and bottom), the completed yoke structure in 2002 (facing page).

16 | Assembly on the Surface | The Solenoid Magnet

The assembly of the solenoid magnet. A cut of a prototype showing the structure of the superconducting coil (top), the assembled coil being rotated for insertion into the outer vacuum tank (right), the insertion of the inner vacuum tank into the coil (bottom). The completed solenoid inside the vacuum tank in 2005 (facing page).

18 | Assembly on the Surface | The Barrel Muon Chambers

Installation of a barrel muon drift tube (DT) chamber (left), pipework for the gas distribution of the chambers (top), view of inner face of one of the yoke wheels housing the DT chambers (bottom), the outer face (facing page) showing the solenoid coil, the barrel hadron calorimeter, two ECAL supermodules and the tracker tube prior to the surface test of the solenoid and parts of the experiment (autumn 2006) the latter using cosmic rays.

20 | Assembly on the Surface | The Endcap Muon Chambers

Installation of an endcap Cathode Strip Chamber (CSC) (left), Resistive Plate Chambers (RPC) installed on one of the yoke disks (top), detail of the layout during the mounting of CSC and RPC on the first endcap yoke disk (bottom), the first yoke endcap disk ready for lowering (facing page).

22 | Assembly on the Surface | The Endcap Hadron Calorimeter

Workers in Murmansk sitting on brass casings of some decommissioned shells of the Russian Northern fleet (left), the casings being melted in St Petersburg (top) and turned into raw brass plates (bottom). These were machined in Minsk and were mounted (facing page) in Point 5 to become the absorber for the endcap hadron calorimeter.

24 | Assembly on the Surface | The Barrel and Forward Hadron Calorimeter

Quartz fibres being inserted into the steel absorber of the Forward Hadron (HF) calorimeter (left), the wedges of HF with fibres and photomultiplier housings (top), one of the HF ready for lowering into the experiment cavern (bottom), one half of the barrel hadron calorimeter in the surface experiment hall (facing page).

A freshly grown ingot of lead tungstate (left), bare lead tungstate crystals after machining and polishing (top), a ‘module’ of about 400 crystals in their glass-fibre alveolae (bottom), preparing to measure the optical and mechanical dimensions of crystals (facing page top), a ‘supermodule’ dressed with front-end electronics (facing page bottom).

28 | Assembly on the Surface | The Endcap Electromagnetic Calorimeter

The preshower - one of eight absorber plates with silicon sensors mounted (top), the crystals mounted on one of four ‘Dees’ of the endcap electromagnetic calorimeter (top right), working in parallel on all four Dees (bottom left), the rear face of the ‘dee’ in the course of the installation of front-end electronics (bottom right), front view showing crystals of a completed “Dee” (facing page).

30 | Assembly on the Surface | The Silicon Strip Tracker

36 | The Lowering of the Heavy Elements

A view of the gantry crane for lowering of heavy elements (top). It was erected over the outside of the surface assembly hall. Closeup of the crane (right). The view of the main shaft from the floor of the experiment cavern (bottom). The lowering in November 2006 of the second heavy element of CMS (Hadron Forward Calorimeter, HF). The other HF can be seen already in the cavern.

38 | The Lowering of the Heavy Elements

Three views of the lowering of the Hadron Forward calorimeter (HF).

40 | The Lowering of the Heavy Elements

42 | The Lowering of the Central and Heaviest Element

The lowering of the heaviest (1920 tonnes) and central element of CMS (YB0) containing the central wheel and the solenoid magnet. At the start (top and right), nearing the end (bottom and facing page) of a 12 hour slow descent in February 2007.

44 | The Installation of Barrel Electromagnetic Calorimeter

46 | The Installation of the Barrel Hadron Calorimeter

Views of the installation of the barrel hadron calorimeter.

50 | The Installation of the Silicon Strip Tracker

The installation of the inner tracker. The lowering of the cylinder containing the silicon strip tracker (top and bottom), the tracker almost inserted inside the ECAL (facing page), the view of the experiment after the installation the tracker showing the barrel calorimeters already installed in the solenoid (right).

52 | The Installation of the Beam Pipe and Endcap Electromagnetic Calorimeter

54 | The Installation of the Pixels Detector

58 | The Underground Services Cavern and the CMS Control Room

View of the off-detector electronics housed in two floors of the underground services cavern (top, right). A view of the online computing facilities housed on the upper floor of the CMS control room building (bottom). Members of the CMS Collaboration present at Point 5 in September 2008 to mark the completion of the LHC start-up detector (facing page).

The first CMS Spokesperson and Technical Coordinator of CMS Michel Della Negra and Alain Herve respectively (top left). One of many impromptu celebrations marking an important milestone (bottom left). A view of the CMS control room in Cessy at the time of the first beam on 10 September 2008 (bottom right). The dignitaries from the local Cessy town hall visiting CMS during the Open Day in April 2008 (facing page left).

Photographs taken during the construction of the CMS detector at CERN