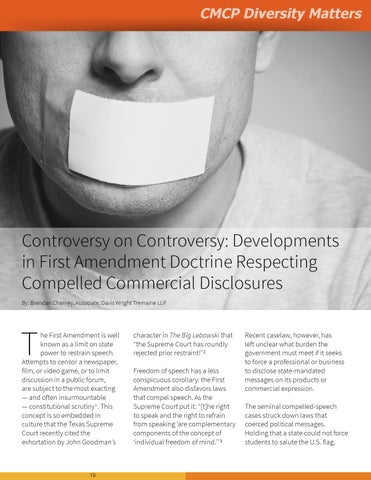 he First Amendment is well known as a limit on state power to restrain speech. Attempts to censor a newspaper, film, or video game, or to limit discussion in a public forum, are subject to the most exacting — and often insurmountable — constitutional scrutiny1. This concept is so embedded in culture that the Texas Supreme Court recently cited the exhortation by John Goodman’s

character in The Big Lebowski that “the Supreme Court has roundly rejected prior restraint!”2 Freedom of speech has a less conspicuous corollary: the First Amendment also disfavors laws that compel speech. As the Supreme Court put it: “[t]he right to speak and the right to refrain from speaking ‘are complementary components of the concept of ‘individual freedom of mind.’”3

Recent caselaw, however, has left unclear what burden the government must meet if it seeks to force a professional or business to disclose state-mandated messages on its products or commercial expression. The seminal compelled-speech cases struck down laws that coerced political messages. Holding that a state could not force students to salute the U.S. flag,