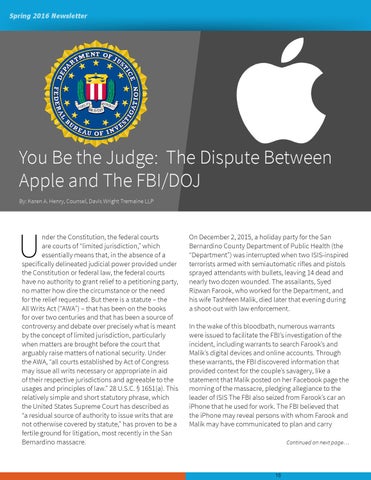 You Be the Judge: The Dispute Between Apple and The FBI/DOJ By: Karen A. Henry, Counsel, Davis Wright Tremaine LLP

nder the Constitution, the federal courts are courts of “limited jurisdiction,” which essentially means that, in the absence of a specifically delineated judicial power provided under the Constitution or federal law, the federal courts have no authority to grant relief to a petitioning party, no matter how dire the circumstance or the need for the relief requested. But there is a statute – the All Writs Act (“AWA”) – that has been on the books for over two centuries and that has been a source of controversy and debate over precisely what is meant by the concept of limited jurisdiction, particularly when matters are brought before the court that arguably raise matters of national security. Under the AWA, “all courts established by Act of Congress may issue all writs necessary or appropriate in aid of their respective jurisdictions and agreeable to the usages and principles of law.” 28 U.S.C. § 1651(a). This relatively simple and short statutory phrase, which the United States Supreme Court has described as “a residual source of authority to issue writs that are not otherwise covered by statute,” has proven to be a fertile ground for litigation, most recently in the San Bernardino massacre.

On December 2, 2015, a holiday party for the San Bernardino County Department of Public Health (the “Department”) was interrupted when two ISIS-inspired terrorists armed with semiautomatic rifles and pistols sprayed attendants with bullets, leaving 14 dead and nearly two dozen wounded. The assailants, Syed Rizwan Farook, who worked for the Department, and his wife Tashfeen Malik, died later that evening during a shoot-out with law enforcement. In the wake of this bloodbath, numerous warrants were issued to facilitate the FBI’s investigation of the incident, including warrants to search Farook’s and Malik’s digital devices and online accounts. Through these warrants, the FBI discovered information that provided context for the couple’s savagery, like a statement that Malik posted on her Facebook page the morning of the massacre, pledging allegiance to the leader of ISIS The FBI also seized from Farook’s car an iPhone that he used for work. The FBI believed that the iPhone may reveal persons with whom Farook and Malik may have communicated to plan and carry Continued on next page…