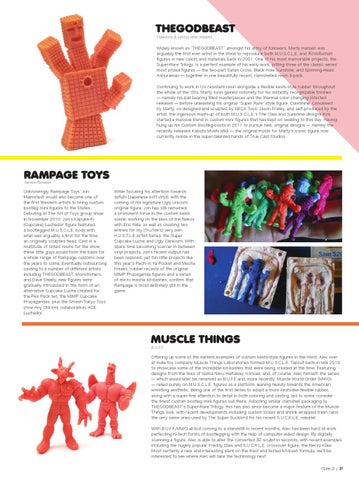 Widely known as “THEGODBEAST” amongst his army of followers, Marty Hansen was arguably the first ever artist in the West to reproduce both M.U.S.C.L.E. and Kinnikuman figures in new colors and materials back in 2001. One of his most memorable projects, the Super-Rare Trilogy, is a perfect example of his early work, pitting three of the classic series’ most prized figures — the two-part Satan Cross, Black Hole Sunshine, and Spinning-Head Ashuraman — together in one beautifully recast, clamshelled resin 3-pack. Continuing to work in UV resistant resin alongside a flexible keshi-style rubber throughout the whole of the &#39;00s, Marty soon gained notoriety for his instantly recognizable finishes — namely his ball bearing filled masterpieces and the thermal color changing Infected releases — before unleashing his original “Super Rare” style figure, Clawshine. Conceived by Marty, co-designed and sculpted by NECA Toys’ Jason Frailey, and self-produced by the artist, the ingenious mash-up of both M.U.S.C.L.E.’s The Claw and Sunshine designs kick started a massive trend in custom mini figures that has kept on swelling to this day. Having hung up his Custom Bootleg-boots in 2011 to pursue new, original designs — namely the recently released Kabuto Mushi MkII — the original molds for Marty’s iconic figure now currently reside in the super-talented hands of True Cast Studios.

Unknowingly, Rampage Toys’ Jon Malmstedt would also become one of the first Western artists to bring custom bootleg mini figures to the States. Debuting at The Art of Toys group show in November 2010, Jon’s Kapuke-Ki (Cupcake) Luchador figure featured a bootlegged M.U.S.C.L.E. body with, what was arguably a first for the time, an originally sculpted head. Cast in a multitude of tinted resins for the show, these little guys would form the basis for a whole range of Rampage customs over the years to come. Eventually outsourcing casting to a number of different artists including THEGODBEAST, Monstrehero, and Dave Sheely, new figures were gradually introduced in the form of an alternative Cupcake Lucha created for the Flex Pack set, the MIMP Cupcake Propagandas, plus the Smash Tokyo Toys (now Any Old Ion) collaboration, ACE Luchador.

While focusing his attention towards sofubi (Japanese soft vinyl), with the coming of his signature Ugly Unicorn original figure, Jon has still remained a prominent force in the custom keshi scene, working on the likes of the Nekos with Eric Nilla, as well as creating two entries for my (Tru:Tek&#39;s) very own H.U.S.T.L.E Artist Series: the Super Cupcake Lucha and Ugly Cenicorn. With spare time becoming scarcer in between vinyl projects, Jon&#39;s recent output has been reduced; yet fun little projects like this year’s Pachi in Ya Pocket and Mecha Freaks, rubber recasts of the original MIMP Propaganda figures and a series of micro mecha kit-bashes, confirm that Rampage is most definitely still in the game.

Offering up some of the earliest examples of custom keshi-style figures in the West, Alec over at indie toy company Muscle Things Laboratories formed M.U.S.C.L.E. Tapout back in late 2010 to showcase some of the incredible kit-bashes that were being created at the time. Featuring designs from the likes of Nama Niku, Halfaway, Ironoak, and, of course, Alec himself, the series — which would later be renamed as B.U.F.F and, more recently, Muscle World Order (MWO) — relied purely on M.U.S.C.L.E. figures as a platform, leaning heavily towards the American wrestling aesthetic. Being one of the first series to adopt a more keshi-like flexible rubber, along with a super-fine attention to detail in both coloring and casting, led to some consider the finest custom bootleg mini figures out there. Adopting similar clamshell packaging to THEGODBEAST’s Super-Rare Trilogy, this has also since become a major feature of the Muscle Things look, with recent developments including custom boxes and shrink-wrapped trash cans… the very same ones used by The Super Sucklord for his recent S.U.C.K.L.E. release! With B.U.F.F/MWO all but coming to a standstill in recent months, Alec has been hard at work perfecting hi-tech forms of bootlegging with the help of computer-aided design. By digitally scanning a figure, Alec is able to alter the converted 3D sculpt in seconds, with recent examples including the hugely popular Freddy Claw and S.U.C.K.L.E. crossover figure, the Necro Klaw. Most certainly a new and interesting slant on the tried and tested kit-bash formula, we’ll be interested to see where Alec will take the technology next. Clutter 22 | 37

Your indispensable guide into the world of art toys, counter culture and underground art. Included in the pages of this issue: Cover art and lengthy interview with Brian Flynn (Super7) and Reis O'Brien (Funko) discussing the Reaction line of figures. Interviews with; Plaseebo, Colus, Shadow Delgado, Miscreation Toys, Deathcat Toys and Emilo Garcia. We also take a look at the Sculptors behind some of the industries best loved toys and delve deeper into the world of Keshi. 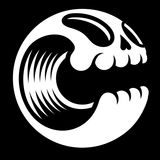