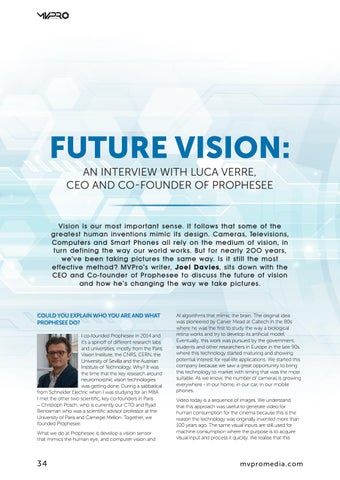 FUTURE VISION: AN INTERVIEW WITH LUCA VERRE, CEO AND CO-FOUNDER OF PROPHESEE

Vision is our most important sense. It follows that some of the greatest human inventions mimic its design. Cameras, Televisions, Computers and Smart Phones all rely on the medium of vision, in turn defining the way our world works. But for nearly 200 years, we’ve been taking pictures the same way. Is it still the most effective method? MVPro’s writer, Joel Davies, sits down with the CEO and Co-founder of Prophesee to discuss the future of vision and how he’s changing the way we take pictures.

COULD YOU EXPLAIN WHO YOU ARE AND WHAT PROPHESEE DO? I co-founded Prophesee in 2014 and it’s a spinoff of different research labs and universities, mostly from the Paris Vision Institute, the CNRS, CERN, the University of Sevilla and the Austrian Institute of Technology. Why? It was the time that the key research around neuromorphic vision technologies was getting done. During a sabbatical from Schneider Electric when I was studying for an MBA I met the other two scientific, key co-founders in Paris – Christoph Posch, who is currently our CTO and Ryad Benosman who was a scientific advisor professor at the University of Paris and Carnegie Mellon. Together, we founded Prophesee. What we do at Prophesee is develop a vision sensor that mimics the human eye, and computer vision and

AI algorithms that mimic the brain. The original idea was pioneered by Carver Mead at Caltech in the 80s where he was the first to study the way a biological retina works and try to develop its artificial model. Eventually, this work was pursued by the government, students and other researchers in Europe in the late 90s where this technology started maturing and showing potential interest for real-life applications. We started this company because we saw a great opportunity to bring this technology to market with timing that was the most suitable. As we know, the number of cameras is growing everywhere - in our home, in our car, in our mobile phones. Video today is a sequence of images. We understand that this approach was useful to generate video for human consumption for the cinema because this is the reason the technology was originally invented more than 100 years ago. The same visual inputs are still used for machine consumption where the purpose is to acquire visual input and process it quickly. We realise that this 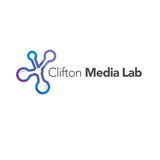