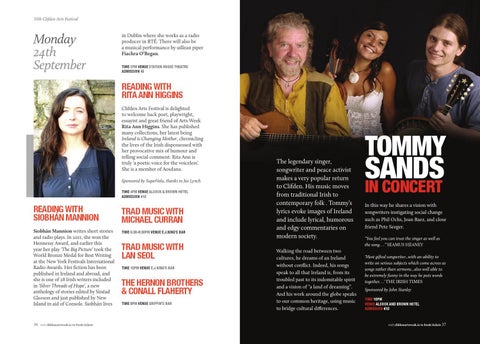 in Dublin where she works as a radio producer in RTÉ. There will also be a musical performance by uillean piper Fiachra O’Regan. Time 2pm Venue Station House Theatre Admission €5

Reading with Rita Ann Higgins Clifden Arts Festival is delighted to welcome back poet, playwright, essayist and great friend of Arts Week Rita Ann Higgins. She has published many collections, her latest being Ireland is Changing Mother, chronicling the lives of the Irish dispossessed with her provocative mix of humour and telling social comment. Rita Ann is truly ‘a poetic voice for the voiceless’. She is a member of Aosdana. Sponsored by SuperValu, thanks to Joe Lynch Time 4pm Venue Alcock &amp; Brown Hotel Admission €10

Reading with Siobhán Mannion Siobhán Mannion writes short stories and radio plays. In 2011, she won the Hennessy Award, and earlier this year her play ‘The Big Picture’ took the World Bronze Medal for Best Writing at the New York Festivals International Radio Awards. Her fiction has been published in Ireland and abroad, and she is one of 28 Irish writers included in ‘Silver Threads of Hope’, a new anthology of stories edited by Sinéad Gleeson and just published by New Island in aid of Console. Siobhán lives

The legendary singer, songwriter and peace activist makes a very popular return to Clifden. His music moves from traditional Irish to contemporary folk . Tommy’s lyrics evoke images of Ireland and include lyrical, humorous and edgy commentaries on modern society. Walking the road between two cultures, he dreams of an Ireland without conflict. Indeed, his songs speak to all that Ireland is, from its troubled past to its indomitable spirit and a vision of “a land of dreaming”. And his work around the globe speaks to our common heritage, using music to bridge cultural differences.

In this way he shares a vision with songwriters instigating social change such as Phil Ochs, Joan Baez, and close friend Pete Seeger. “You feel you can trust the singer as well as the song. . .” SEAMUS HEANEY ‘Most gifted songwriter...with an ability to write on serious subjects which come across as songs rather than sermons...also well able to be extremely funny in the way he puts words together. . .’ The IRISH TIMES Sponsored by John Stanley Time 10pm Venue Alcock and Brown Hotel Admission €10