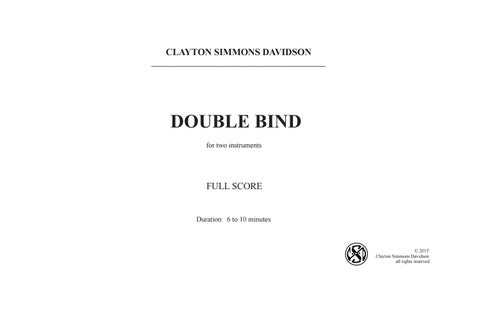 For every module (box), each player makes their own choice of one of the two energy model / gestures given. These are improvisation cues to guide your choices of timbres and techniques for that module. The goal is not to assign a specific technique or timbre to an energy model, but to use them as conceptual interpretive guides as you make statements and responses throughout the module. They may guide your choices on a local, moment-to-moment level, as well as for the module as a whole. It will be helpful to think through your general associations and interpretational choices in advance for the various symbols of energy models. For every module, both performers can choose their own energy model / gesture, independent of the other performer. Feel free to play unpitched (or indeterminately pitched) sounds in your improvisation. For sounds that are pitched, limit yourself to the pitch collection given for that module, in any octave (except where indicated). If the technique is a multiphonic, harmonic, bent tone, quarter tone or other similar technique, the pitch collections are to be treated as the fundamentals, departure tones, or arrival tones of the techniques chosen. The larger noteheads in each collection indicate pitches to be emphasized.

The performer who decides to begin the piece is designated as PLAYER 1, and the other is PLAYER 2. Players alternate which person initiates the transition to the next module (i.e., PLAYER 1 begins Module A and PLAYER 2 responds. After approximately 15 to 90 seconds, PLAYER 2 makes their choices and begins Module B. PLAYER 1 hears the change and responds from Module B, and so on in alternation). The map of who is initiator and responder in each module is contained in the dynamic map running along the bottom of the score.

Where rhythmic patterns appear in the modules, they are to be treated as choices for the over-arching PULSE of that module, not fixed rhythmic gestures that cannot be deviated from once begun. In those instances, the initiator&#39;s goal is not continual sound but a sense of pulse or line. Where no pulse pattern is given, the performers are free from pulse or rhythmic obligation for that module and can do as they want.

The performer who initiates a new module chooses an energy model/gesture AND pulse pattern (where given), then sets their tempo and begins the module while the other performer is still playing the previous module. After the new module is initiated, the other performer transitions into the new area and responds to the initiator. This implies some level of interference between the two sections as the edges of the different modules overlap.

The local tempo for each section is established by the performer who initiates that section. A new tempo is possible for each module.

Except in the very beginning and ending modules of the piece, where both performers follow a pattern, the pulse pattern choices shown ONLY apply to the performer who initiates that module. The responding performer is free to ignore all pulse pattern indications.

Each module should last approximately 15 - 90 seconds. The total duration of the piece should be between 6 and 10 minutes. It may be helpful in performance to have a clock, stopwatch or other silent timer visible to help each performer keep track of the approximate length of the modules. Running along the bottom of the score is a “map” of the approximate possible dynamic range of the modules and transitions, shown by the relative thickness of the performer’s line. The map also indicates which player is the initiator of the module, shown by which performer’s line is on the top position in the map. In general, responses to another player do not need to wait for them to finish - interruptions and overlapping are allowed.

Where a non-pulse second pair of choices is given (i.e., “Limit yourself to the highest 2 octaves on your instrument”), ONLY the person initiating the module is limited to these choices, just like the pulse pattern choices. The responding performer is free to ignore the limitation.