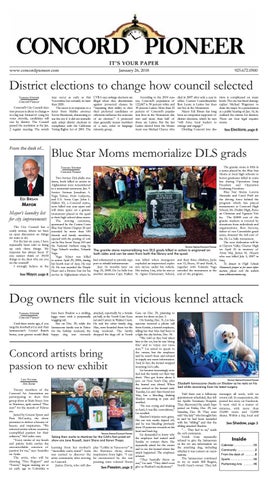 Concord’s City Council election process is about to change – in a big way. Instead of vying for votes citywide, candidates will run by district. The Council passed the resolution at the Jan. 2 regular meeting. The switch

may occur as early as this November, but certainly no later than 2020. The move is in response to a letter from Malibu attorney Kevin Shenkman, threatening to sue the city if it did not immediately adopt district elections in compliance with the California Voting Rights Act of 2001. The

CVRA says at-large elections are illegal when they discriminate against protected classes by “impairing their ability to elect their preferred candidates or otherwise influence the outcome of an election.” A protected class generally means members of a race, color or language minority group.

died in 2007 after only a year in office. Current Councilmember Ron Leone is Latino but does not live in the Monument. Mayor Edi Birsan has long been an outspoken supporter of district elections, which he says “will force local leaders to emerge and engage.” Dividing Concord into dis-

The City Council has a yearly retreat, where we have an open discussion on things we want to do. For the last six years, I have repeatedly been told to bring up only three things. My response has always been: If you cannot think of 30-50 things to do, then why are you on the council? I strongly believe in the

tricts is complicated on many levels. The city has hired demographer Michael Wagaman to draw the maps. In a presentation at a public hearing on Jan. 16, he outlined the criteria for districts. There are four legal requirements.

Two former DeLaSalle students, both killed in action in Afghanistan were remembered in a memorial ceremony Jan. 9. Senior Airman Jonathan A. Vega Yelner, from Lafayette, and U.S. Army Capt. John L. Hallett III, a Concord native, were killed one year apart and will share space on a granite monument placed in the quad at their high school alma mater. The moving ceremony, sponsored by the Contra Costa Blue Star Moms Chapter 20 and attended by more than 100 friends and family members, opened with the posting of colors by Boy Scout Troop 243 and the National Anthem sung by Vega Yelner’s mother, Yolanda Vega. Vega Yelner was killed in action April 29, 2008, during his fourth tour of duty. He was 25. He was awarded the Purple Heart and a Bronze Star for his service in Afghanistan where he

was killed when insurgents exploded an improvised explosive device under his vehicle. His widow, Lisa, who he met at St. Agnes Elementary School,

have been Shadow – a smiling, leggy mutt with a perpetually wagging tail. But on Dec. 29, while the Iannaccone family was in Tahoe for the holiday weekend, the happy dog was viciously

attacked, reportedly by a female pit bull, at the North Gate Kennel and Cattery in Walnut Creek. He and the other family dog, Max, were boarded there for the long weekend. The family dropped the dogs off at North

Gate on Dec. 29, planning to return for them on Jan. 2. On Sunday, Dec. 31, Liz Iannaccone received a phone call from Kristin, a kennel employee, telling her that Max had been in a fight the day before, Dec. 30. “She told us they had taken him to the vet, but he was ‘doing fine’ and to ‘enjoy our vacation.’” Liz asked to speak to the owner, but the employee said he wasn’t there and refused to supply any more information. And, in fact, the kennel stopped returning Liz’s calls. Liz became increasingly worried and the family cut their trip short. They got home about 6 p.m. on New Year’s Day, after the kennel was closed. When they arrived at the kennel early Tuesday, Liz and Alan found not Max, but a bleeding, shaking Shadow moaning in pain and terrified. “He was crying and shaking so hard, it was like convulsions,” Liz recalled. Shadow’s injuries were grave. His ear was nearly ripped off, and he was bleeding profusely from 18 puncture wounds on his head and back leg. Liz demanded to know why the employee had waited until Sunday to contact them. She repeatedly asked for the owner and to see the kennel where the attack happened. The employee refused. “They basically threw us out,” Liz said. “They didn’t even give us Shadow’s medications.”

The granite stone memorializing two DLS grads killed in action is engraved on both sides and can be seen from both the library and the quad.

and their three children, Jackson 12, Bryce, 10 and Heidi, 8, together with Yolanda Vega unveiled the monument at the end of the program.

The granite stone is fifth in a series placed by the Blue Star Moms at local high schools to honor graduates killed in combat during Operation Iraqi Freedom and Operation Enduring Freedom. Blue Star Moms Loretta Masnada and Carol Prell are the driving force behind the program which has placed monuments at Concord High School, Mt. Diablo High, Berean Christian and Ygnacio Valley. The $5000 cost of the granite markers is covered by donations from individuals and organizations. Ron Stevens, father of two Carondelet graduates, donated the full cost of the De La Salle monument. The next dedication will be at Clayton Valley Charter High on April 25 in memory of Army Maj. James M. Ahearn who was killed July 5, 2007 in Iraq. To donate to High Schools Memorials project or for more information, please visit the website www.ccbluestarmoms.org.

Until three weeks ago, if you rang the doorbell at Liz and Alan Iannaccone’s Crystyl Ranch home, your greeter would likely

Twenty members of the Concord Art Association are participating in their first group show at Main Street Arts in Martinez, aptly named “Passion” for the month of February. Juried by Gwenn Spratt and Pam McCauley, the show promises to deliver a bounty of beauty and inspiration. “We selected artists whose creativity exemplified passion for their subjects,” McCauley says. “Every stroke of my brush and palette knife carries the uncontrollable emotion of passion for me,” says Anamilena Ayala. The artist, who will be showing “Two Peppers” and “Forest,” began making art at an early age in Colombia –

Taking their works to Martinez for the CAA’s first juried art show are Jane Russell, Joani Share and Karen Thapa.

learning from her mother’s “incredibly crafty mind.” Ayala was excited to discover the artist community after moving to Concord. Janice Davis, who will dis-

play “Lobby in Vancouver” in the Martinez show, draws inspiration from light. “I can be mesmerized by the sun pouring onto colored floors

Elizabeth Iannaccone checks on Shadow as he rests on his bed while recovering from his latest surgery.

Told there was a follow-up appointment scheduled, they left for Apollo Veterinary Hospital. They discovered the attack happened on Friday, Dec. 29, not Saturday, Dec. 30. They were told “the lady” who brought him in said he had been kenneled with his “sibling” and that the sibling attacked Shadow. “… They lied to us,” reads the vet’s comments. North Gate repeatedly refused to give the Iannacones or the vet any information on the attacking dog, including whether it was current on vaccinations. The Iannacones continued to try to reach Bill Rogers, North Gate’s owner. They left

messages all week, with no return call. In exasperation, she posted her story on Facebook. It went viral in a matter of minutes, with more than 23,000 views and 15,000 shares. Within a day, local and 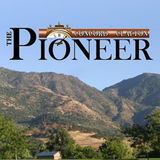