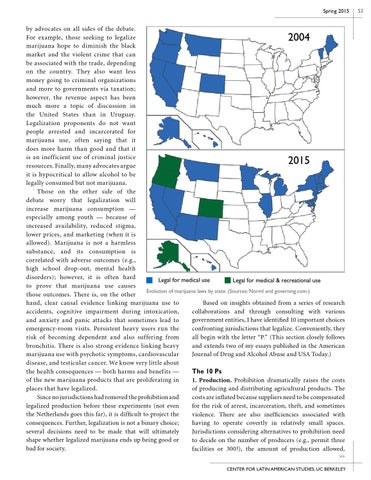 by advocates on all sides of the debate. For example, those seeking to legalize marijuana hope to diminish the black market and the violent crime that can be associated with the trade, depending on the country. They also want less money going to criminal organizations and more to governments via taxation; however, the revenue aspect has been much more a topic of discussion in the United States than in Uruguay. Legalization proponents do not want people arrested and incarcerated for marijuana use, often saying that it does more harm than good and that it is an inefficient use of criminal justice resources. Finally, many advocates argue it is hypocritical to allow alcohol to be legally consumed but not marijuana. Those on the other side of the debate worry that legalization will increase marijuana consumption — especially among youth — because of increased availability, reduced stigma, lower prices, and marketing (when it is allowed). Marijuana is not a harmless substance, and its consumption is correlated with adverse outcomes (e.g., high school drop-out, mental health disorders); however, it is often hard Legal for medical use Legal for medical & recreational use to prove that marijuana use causes Evolution of marijuana laws by state. (Sources: Norml and governing.com.) those outcomes. There is, on the other Based on insights obtained from a series of research hand, clear causal evidence linking marijuana use to collaborations and through consulting with various accidents, cognitive impairment during intoxication, government entities, I have identified 10 important choices and anxiety and panic attacks that sometimes lead to confronting jurisdictions that legalize. Conveniently, they emergency-room visits. Persistent heavy users run the all begin with the letter “P.” (This section closely follows risk of becoming dependent and also suffering from and extends two of my essays published in the American bronchitis. There is also strong evidence linking heavy Journal of Drug and Alcohol Abuse and USA Today.) marijuana use with psychotic symptoms, cardiovascular disease, and testicular cancer. We know very little about the health consequences — both harms and benefits — The 10 Ps of the new marijuana products that are proliferating in 1. Production. Prohibition dramatically raises the costs places that have legalized. of producing and distributing agricultural products. The Since no jurisdictions had removed the prohibition and costs are inflated because suppliers need to be compensated legalized production before these experiments (not even for the risk of arrest, incarceration, theft, and sometimes the Netherlands goes this far), it is difficult to project the violence. There are also inefficiencies associated with consequences. Further, legalization is not a binary choice; having to operate covertly in relatively small spaces. several decisions need to be made that will ultimately Jurisdictions considering alternatives to prohibition need shape whether legalized marijuana ends up being good or to decide on the number of producers (e.g., permit three bad for society. facilities or 300?), the amount of production allowed,

Highlights from the Spring 2015 edition of the Berkeley Review of Latin American Studies include: - Alberto Díaz-Cayeros on the disappearan...

Highlights from the Spring 2015 edition of the Berkeley Review of Latin American Studies include: - Alberto Díaz-Cayeros on the disappearan...