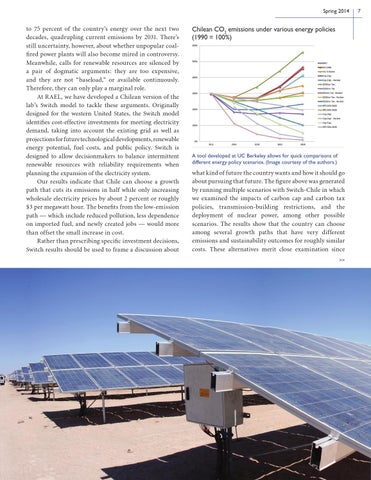 to 75 percent of the country’s energy over the next two decades, quadrupling current emissions by 2031. There’s still uncertainty, however, about whether unpopular coalfired power plants will also become mired in controversy. Meanwhile, calls for renewable resources are silenced by a pair of dogmatic arguments: they are too expensive, and they are not “baseload,” or available continuously. Therefore, they can only play a marginal role. At RAEL, we have developed a Chilean version of the lab’s Switch model to tackle these arguments. Originally designed for the western United States, the Switch model identifies cost-effective investments for meeting electricity demand, taking into account the existing grid as well as projections for future technological developments, renewable energy potential, fuel costs, and public policy. Switch is designed to allow decisionmakers to balance intermittent renewable resources with reliability requirements when planning the expansion of the electricity system. Our results indicate that Chile can choose a growth path that cuts its emissions in half while only increasing wholesale electricity prices by about 2 percent or roughly $3 per megawatt hour. The benefits from the low-emission path — which include reduced pollution, less dependence on imported fuel, and newly created jobs — would more than offset the small increase in cost. Rather than prescribing specific investment decisions, Switch results should be used to frame a discussion about

A tool developed at UC Berkeley allows for quick comparisons of different energy policy scenarios. (Image courtesy of the authors.)

what kind of future the country wants and how it should go about pursuing that future. The figure above was generated by running multiple scenarios with Switch-Chile in which we examined the impacts of carbon cap and carbon tax policies, transmission-building restrictions, and the deployment of nuclear power, among other possible scenarios. The results show that the country can choose among several growth paths that have very different emissions and sustainability outcomes for roughly similar costs. These alternatives merit close examination since &gt;&gt; 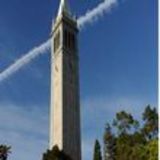