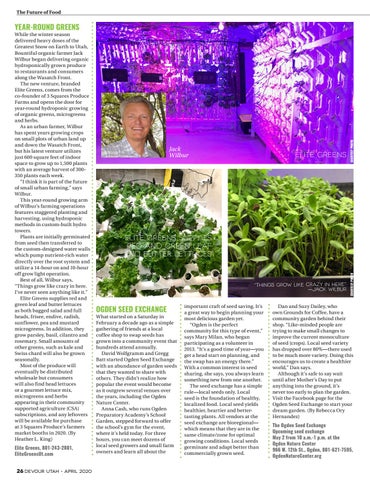 The Future of Food

What started on a Saturday in February a decade ago as a simple gathering of friends at a local coffee shop to swap seeds has grown into a community event that hundreds attend annually. David Wolfgramm and Gregg Batt started Ogden Seed Exchange with an abundance of garden seeds that they wanted to share with others. They didn’t realize how popular the event would become as it outgrew several venues over the years, including the Ogden Nature Center. Anna Cash, who runs Ogden Preparatory Academy’s School Garden, stepped forward to offer the school’s gym for the event, where it’s held today. For three hours, you can meet dozens of local seed growers and small farm owners and learn all about the

important craft of seed saving. It’s a great way to begin planning your most delicious garden yet. “Ogden is the perfect community for this type of event,” says Mary Milan, who began participating as a volunteer in 2013. “It’s a good time of year—you get a head start on planning, and the swap has an energy there.” With a common interest in seed sharing, she says, you always learn something new from one another. The seed exchange has a simple rule—local seeds only. Local seed is the foundation of healthy, localized food. Local seed yields healthier, heartier and bettertasting plants. All vendors at the seed exchange are bioregional— which means that they are in the same climate/zone for optimal growing conditions. Local seeds germinate and adapt better than commercially grown seed.

While the winter season delivered heavy doses of the Greatest Snow on Earth to Utah, Bountiful organic farmer Jack Wilbur began delivering organic hydroponically grown produce to restaurants and consumers along the Wasatch Front. The new venture, branded Elite Greens, comes from the co-founder of 3 Squares Produce Farms and opens the door for year-round hydroponic growing of organic greens, microgreens and herbs. As an urban farmer, Wilbur has spent years growing crops on small plots of urban land up and down the Wasatch Front, but his latest venture utilizes just 600 square feet of indoor space to grow up to 1,500 plants with an average harvest of 300350 plants each week. “I think it is part of the future of small urban farming,” says Wilbur. This year-round growing arm of Wilbur’s farming operations features staggered planting and harvesting, using hydroponic methods in custom-built hydro towers. Plants are initially germinated from seed then transferred to the custom-designed water walls which pump nutrient-rich water directly over the root system and utilize a 14-hour on and 10-hour off grow light operation. Best of all, Wilbur says, “Things grow like crazy in here. I’ve never seen anything like it.” Elite Greens supplies red and green leaf and butter lettuces as both bagged salad and full heads, frisee, endive, radish, sunflower, pea and mustard microgreens. In addition, they grow parsley, basil, cilantro and rosemary. Small amounts of other greens, such as kale and Swiss chard will also be grown seasonally. Most of the produce will eventually be distributed wholesale but consumers will also find head lettuces or a gourmet lettuce mix, microgreens and herbs appearing in their community supported agriculture (CSA) subscriptions, and any leftovers will be available for purchase at 3 Squares Produce’s farmers market booths in 2020. (By Heather L. King)

Dan and Suzy Dailey, who own Grounds for Coffee, have a community garden behind their shop. “Like-minded people are trying to make small changes to improve the current monoculture of seed (crops). Local seed variety has dropped over 80%—there used to be much more variety. Doing this encourages us to create a healthier world,” Dan says. Although it’s safe to say wait until after Mother’s Day to put anything into the ground, it’s never too early to plan the garden. Visit the Facebook page for the Ogden Seed Exchange to start your dream garden. (By Rebecca Ory Hernandez) The Ogden Seed Exchange Upcoming seed exchange May 2 from 10 a.m.-1 p.m. at the Ogden Nature Center 966 W. 12th St., Ogden, 801-621-7595, OgdenNatureCenter.org