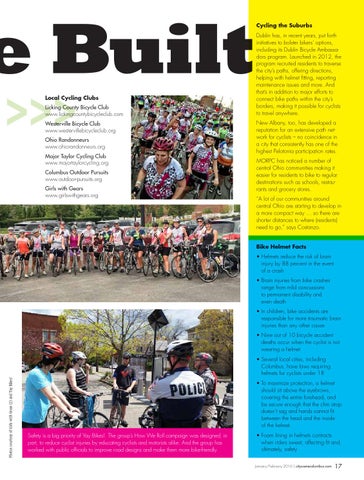 Cycling the Suburbs Dublin has, in recent years, put forth initiatives to bolster bikers’ options, including its Dublin Bicycle Ambassadors program. Launched in 2012, the program recruited residents to traverse the city’s paths, offering directions, helping with helmet fitting, reporting maintenance issues and more. And that’s in addition to major efforts to connect bike paths within the city’s borders, making it possible for cyclists to travel anywhere. New Albany, too, has developed a reputation for an extensive path network for cyclists – no coincidence in a city that consistently has one of the highest Pelotonia participation rates. MORPC has noticed a number of central Ohio communities making it easier for residents to bike to regular destinations such as schools, restaurants and grocery stores. “A lot of our communities around central Ohio are starting to develop in a more compact way … so there are shorter distances to where (residents) need to go,” says Costanzo. Bike Helmet Facts • Helmets reduce the risk of brain injury by 88 percent in the event of a crash • Brain injuries from bike crashes range from mild concussions to permanent disability and even death • In children, bike accidents are responsible for more traumatic brain injuries than any other cause • Nine out of 10 bicycle accident deaths occur when the cyclist is not wearing a helmet

Photos courtesy of Girls with Gears (2) and Yay Bikes!

• Several local cities, including Columbus, have laws requiring helmets for cyclists under 18 • To maximize protection, a helmet should sit above the eyebrows, covering the entire forehead, and be secure enough that the chin strap doesn’t sag and hands cannot fit between the head and the inside of the helmet. Safety is a big priority of Yay Bikes!. The group’s How We Roll campaign was designed, in part, to reduce cyclist injuries by educating cyclists and motorists alike. And the group has worked with public officials to improve road designs and make them more bike-friendly.

This is the January/February 2016 edition of CityScene Magazine. 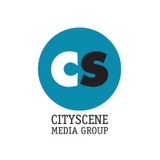