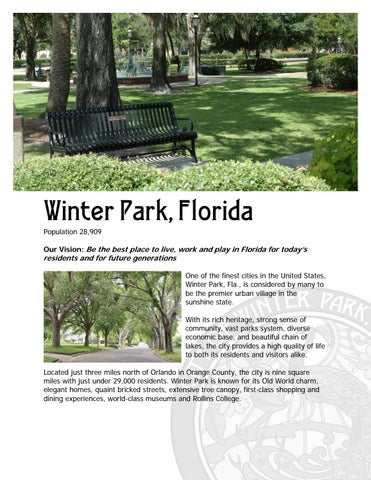 Winter Park, Florida Population 28,909 Our Vision: Be the best place to live, work and play in Florida for today’s

residents and for future generations

One of the finest cities in the United States, Winter Park, Fla., is considered by many to be the premier urban village in the sunshine state. With its rich heritage, strong sense of community, vast parks system, diverse economic base, and beautiful chain of lakes, the city provides a high quality of life to both its residents and visitors alike. Located just three miles north of Orlando in Orange County, the city is nine square miles with just under 29,000 residents. Winter Park is known for its Old World charm, elegant homes, quaint bricked streets, extensive tree canopy, first-class shopping and dining experiences, world-class museums and Rollins College.

Described by some as a small New England village with a European flavor with quaint shops and fine restaurants, Winter Park is as beautiful as it is unique. In addition to its town-and-gown relationship with Rollins College, the oldest private college in Florida, the city has developed significant partnerships among area businesses, schools, cultural organizations, civic groups and neighborhood associations.

Winter Park is not only known for its abundance of upscale shopping and unique restaurants, but also its historic Hannibal Square district, Winter Park Village and nationally-ranked schools which include Winter Park High School, Rollins College and Valencia Community College.

One of the best ways to get acquainted with the city is to take a leisurely boat ride on the Winter Park Scenic Boat Tour, located at the east end of Morse Boulevard. This one-hour, open-air cruise will provide you with breathtaking views of our city’s beautiful homes and expansive chain of lakes as you listen to a narrated history of Winter Park.

If traveling by train is your preferred method of transportation, nestled in the heart of downtown is the Winter Park Train Station that services both Amtrak® and SunRail®. SunRail, launched in May 2014, is the regions commuter rail service that travels from Debary to Orlando. With 12 stops along the way, passengers can enjoy their commute to and from work, or simply venture on board to explore restaurants, shops or other amenities located in Volusia, Seminole and Orange counties. For our leisure and avid bicyclists, the city has been recognized as a Bronze Level Bicycle Friendly Community by the League of American Bicyclists for its strong commitment to bicycling. In addition, the city is also designated a certified gold level Green Local Government by the Florida Green Building coalition in recognition of is sustainability efforts. The city’s 53rd Mayor, Kenneth W. Bradley, coined the phrase, “Without parks we would just be ‘winter.’” Because open greenspace is so important, the city has codified its requirement of parkland to 10 acres of parkland for every 1,000 residents. Among the city’s 75 beautiful large and small parks, the main parks include Central Park, Mead Botanical Garden, Kraft Azalea Gardens, Ward Memorial Park, Lake Baldwin Park, Shady Park, and Martin Luther King, Jr. Park. Each year Central Park becomes home the nationally-recognized Winter Park Sidewalk Art Festival during the third weekend in March, the Winter Park Autumn Art Festival during the second weekend in October, the Old Fashioned 4th of July Celebration, and many other community and city-sponsored events that are held throughout the year. Events like these draw hundreds of thousands of visitors and guests to Winter Park all year round.

Because the city is an inviting destination unlike any other, it serves as the ideal backdrop for many television shows, movies and commercials. In 2014, the city hosted “A Hero’s Welcome” parade in honor of a U.S. solider, Lt. Chuck Nadd’s return home from military service in Afghanistan. The parade was held in downtown Winter Park and was featured in a Budweiser® 60-second commercial during Super Bowl XLVIII. The commercial was the recipient of an Emmy® nomination in the Outstanding Commercial category and continues to showcase the best of Winter Park to its millions of viewers.

History Chartered in 1887, the city was developed as a winter resort for wealthy Northerners seeking refuge from the harsh winters and a tranquil place to rest and relax. The city was originally named Lakeview in 1858 and renamed Osceola in 1870. Eleven years later, the name Winter Park was chosen by its founders. Loring Chase and Oliver Chapman, who during an informal discussion, decided they wanted the name to be something about a park in winter – thus the name Winter Park. Rollins College, the oldest college in Florida and the nation’s premiere liberal arts college, was founded here in 1885 by New England Congregationalists who sought to bring their style of liberal arts education to Florida. Tourists came to the city originally to enjoy Winter Park’s beautiful lakes, warm temperatures and natural surroundings. Today they can enjoy these same amenities in addition to great restaurants, museums, entertainment, theater, outdoor activities, festivals and much more.

Climate Winter Park, Florida, gets 51 inches of rain per year. The US average is 37. The number of days with any measurable precipitation is 113. On average, there are 238 sunny days per year. The July high is around 92 degrees and January low is 50. Source: bestplaces.net

Commerce The City of Winter Park is open for business. With one of the lowest tax rates in the region, a pro-business environment and unique redevelopment opportunities the City of Winter Park is a great place to start or grow your business. Boasting a convenient location in the heart of the fast growing Metro Orlando Area while setting itself apart from its neighbors with its small town charm, superior level of service, and a proven track record of commercial success, Winter Park is an advantageous location for any company. The benefit of not having a state income tax is appealing to both the commercial and residential base.

Government With a citywide budget of $156 million, Winter Park is an independent city that provides a wide variety of services to its residents, business owners and visitors. The levels of service have been established over time through City Commission, citizen and staff input with the goal to preserve a superior quality of life for today’s residents and for future generations. The City of Winter Park is governed by four City Commissioners and one Mayor, all elected at-large for three-year terms. Winter Park is a strong City Manager form of government where the daily operation of the city is the responsibility of the City Manager, who serves at the pleasure of the Mayor and City Commission.

In addition to high-quality city services, it manages its own municipal electric and water utilities. Through thoughtful planning and daily analysis of its services and budget, the City of Winter Park has emerged from one of the worst recessions in good shape, with a healthy reserve surplus, and is able to maintain an exceptional quality of life for its residents, businesses and visitors.

The City Manager is responsible for hiring and supervising a professional staff to carry out the directives and policies of the Mayor and City Commission. The municipal government in Winter Park employs approximately 500 full-time employees, who provide high quality services for its residents.

Located just three miles north of Orlando, Winter Park enjoys the benefits of its neighboring city’s tourism industry, convention growth, and international travel via its airport and intricate highway systems. Winter Park has been called the ‘Unexpected Orlando’ and capitalizes on its central location. 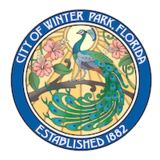