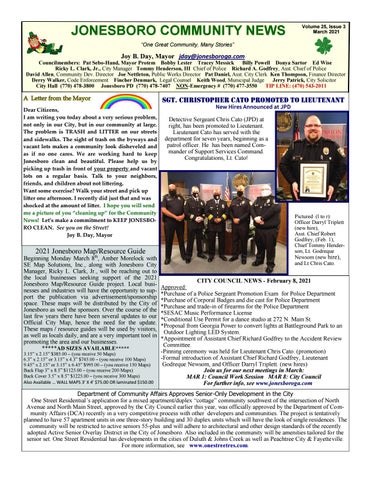 “One Great Community, Many Stories”

Sgt. Christopher Cato Promoted to Lieutenant Dear Citizens, I am writing you today about a very serious problem, not only in our City, but in our community at large. The problem is TRASH and LITTER on our streets and sidewalks. The sight of trash on the byways and vacant lots makes a community look disheveled and as if no one cares. We are working hard to keep Jonesboro clean and beautiful. Please help us by picking up trash in front of your property and vacant lots on a regular basis. Talk to your neighbors, friends, and children about not littering. Want some exercise? Walk your street and pick up litter one afternoon. I recently did just that and was shocked at the amount of litter. I hope you will send me a picture of you “cleaning up” for the Community News! Let’s make a commitment to KEEP JONESBORO CLEAN. See you on the Street! Joy B. Day, Mayor

Detective Sergeant Chris Cato (JPD) at right, has been promoted to Lieutenant. Lieutenant Cato has served with the department for seven years, beginning as a patrol officer. He has been named Commander of Support Services Command. Congratulations, Lt. Cato!

Department of Community Affairs Approves Senior-Only Development in the City One Street Residential’s application for a mixed apartment/duplex “cottage” community southwest of the intersection of North Avenue and North Main Street, approved by the City Council earlier this year, was officially approved by the Department of Community Affairs (DCA) recently in a very competitive process with other developers and communities. The project is tentatively planned to have 57 apartment units in one three-story building and 30 duplex units which will have the look of single residences. The community will be restricted to active seniors 55-plus and will adhere to architectural and other design standards of the recently adopted Active Senior Overlay District in the City of Jonesboro. Also included in the community will be amenities tailored for the senior set. One Street Residential has developments in the cities of Duluth &amp; Johns Creek as well as Peachtree City &amp; Fayetteville. For more information, see www.onestreetres.com.

Get to Know… Maria Wetherington

Get to Know… Mike Boatfield

Maria Wetherington has served as Administrative Assistant since March 2017. Her many duties include issuing business licenses, administering permits, collecting taxes, Human Resources, and working with the Georgia Main Street Program. Maria was born in Valdosta, Georgia, but has spent almost all of her life in Jonesboro. She enjoys spending time on the lake with her family and friends. Maria has been married for 29 years and has two children. She is known for her intellect and dependability. Thank you, Maria Wetherington!

Guest Columnist - Tommy Dupuis I had a great experience as a child being healed by a “Traiteur.” I had a Planter&#39;s wart on my foot. My mom was an RN working for Dr. Mims Morgan at the time. Planters warts grow deep into the foot. Dr. Morgan told my mom that I would be on crutches all summer if he cut it out. He recommended a Traiteur in Opelousas (LA). We took a Sunday drive. I was totally unaware of what was happening. We pull into a gas station and the attendant comes out to fill the car. It was summer and naturally I was barefoot. My dad says to show him (the attendant/ Traiteur) my foot. I do so without thinking twice. I didn&#39;t notice anything unusual. Later he tanked us up and off we go back home. The wart got progressively smaller each week. After about 4 weeks I woke up one morning to fresh pink skin and no wart. Incidentally, I served in the U.S. Army with an American Indian that said that he had inherited the gift to stop bleeding...

Mike was born at Georgia Baptist Hospital (Atlanta) and grew up in Hapeville. He has worked for the City for seven years and currently drives the garbage truck. Mike is known around the City for his various skills and can do just about any task he is assigned. He and his wife of 22 years enjoy taking their dog for walks and riding him in the truck. Mike is a long time resident of the City, having moved here in 1999. Good work, Mike Boatfield!

BAR-B-QUE HERE IN THE CITY!

Plans are underway G for a Jonesboro City Garden. If you are interested in serving on the Committee, volunteering some work time, or in having a space to grow your own veggies and flowers, call or email Samaria McCoy NOW at Smoked Wings/Tips/Shrimp/Fish/Sausage/ Jonesboro Police Department Burgers/BBQ/Fries and More! 1423 Stockbridge Road, Jonesboro, GA (770) 478-7407 or Phone (944) 473-3397 smccoy@jonesboro ga.com JONESBORO

(Tommy Dupuis is a city resident, a native of Louisiana and a Vietnam Veteran. Tommy is a raconteur with an interesting background and many stories.. He has worked on oil rigs, managed restaurants, and other diverse pursuits. He and wife Laura, have two daughters, Anna &amp; Mary Katherine.)

What is Irish and is left out all summer?

Plans are moving forward for the Jonesboro City Center just west of Lee Street Park on Smith Street. The 33,000 square foot building will include Public works news both City Hall and the Jonesboro Police Department. Approved by the ***Garbage Update*** Jonesboro City Council over a period of months, property was assembled during 2019 and 2020. The Art Deco-style building will feature a large New pick-up date atrium separating City Hall and the Police Department. Included in the for the citizens that live in City Hall will be a spacious Community Room able to accommodate 150+ The Grove Subdivision and people, which will also open to the atrium to accommodate a larger crowd. Old Ivy Townhomes. New The expansive windows of the building will face Lee Street Park and will day will be every Tuesday include a clock tower, as well as a gathering place overlooking the park. starting March 6th. The Police Department will feature a new courtroom and a secured sally port for police entry to the building. A squad room, interview and holding Remember rooms, an evidence vault, and offices for all staff and probation services that Public will round out the main features. On the City Hall side, a reception area for Works offers visitors, offices for all staff, record and plan rooms, and a professional large item conference space will enable staff to provide needed services for constitupickup for an additional ents. During the coming months, we will be featuring various element of charge. Contact City Hall for the building to give our readers a “peek” of the Center. Final design docuprices. ments are being completed; groundbreaking is planned for early 2021. (770) 478-3800 WOMEN of JONESBORO

No such day. Call City Hall for a prize any day in March. (*first 3)

How can you tell if a Leprechaun is having a good time? He is Dublin-over in laughter!

This newsletter is about all of the wonderful things going on in our community.