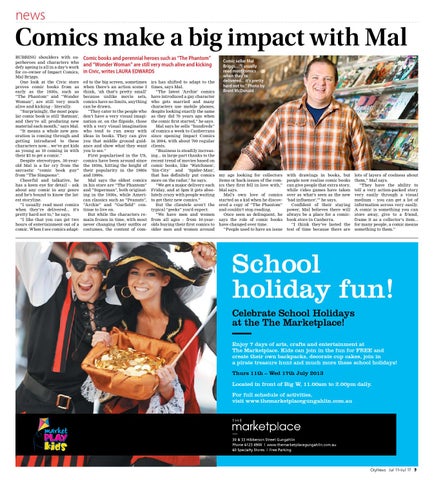 Comics make a big impact with Mal RUBBING shoulders with superheroes and characters who defy ageing is all in a day’s work for co-owner of Impact Comics, Mal Briggs. One look at the Civic store proves comic books from as early as the 1930s, such as “The Phantom” and “Wonder Woman”, are still very much alive and kicking – literally. “Surprisingly, the most popular comic book is still ‘Batman’, and they’re all producing new material each month,” says Mal. “It means a whole new generation is coming through and getting introduced to these characters now... we’ve got kids as young as 10 coming in with their $5 to get a comic.” Despite stereotypes, 36-yearold Mal is a far cry from the sarcastic “comic book guy” from “The Simpsons”. Cheerful and talkative, he has a keen eye for detail – ask about any comic in any genre and he’s bound to know the latest storyline. “I usually read most comics when they’re delivered... it’s pretty hard not to,” he says. “I like that you can get two hours of entertainment out of a comic. When I see comics adapt-

Comic books and perennial heroes such as “The Phantom” and “Wonder Woman” are still very much alive and kicking in Civic, writes LAURA EDWARDS ed to the big screen, sometimes when there’s an action scene I think, ‘ah that’s pretty small’ because unlike movie sets, comics have no limits, anything can be drawn. “They cater to the people who don’t have a very visual imagination or, on the flipside, those with a very visual imagination who tend to run away with ideas in books. They can give you that middle ground guidance and show what they want you to see.” First popularised in the US, comics have been around since the 1930s, hitting the height of their popularity in the 1980s and 1990s. Mal says the oldest comics in his store are “The Phantom” and “Superman”, both originating in the 1930s, while American classics such as “Peanuts”, “Archie” and “Garfield” continue to live on. But while the characters remain frozen in time, with most never changing their outfits or costumes, the content of com-

ics has shifted to adapt to the times, says Mal. “The latest ‘Archie’ comics have introduced a gay character who gets married and many characters use mobile phones, despite looking exactly the same as they did 70 years ago when the comic first started,” he says. Mal says he sells “hundreds” of comics a week to Canberrans since opening Impact Comics in 2004, with about 700 regular clients. “Business is steadily increasing... in large part thanks to the recent trend of movies based on comic books, like ‘Watchmen’, ‘Sin-City’ and ‘Spider-Man’, that has definitely put comics more on the radar,” he says. “We get a major delivery each Friday, and at 5pm it gets absolutely crazy with people waiting to get their new comics.” But the clientele aren’t the typical “geeks” you’d expect. “We have men and women from all ages – from 10-yearolds buying their first comics to older men and women around

my age looking for collectors items or back-issues of the comics they first fell in love with,” Mal says. Mal’s own love of comics started as a kid when he discovered a copy of “The Phantom” and couldn’t stop reading. Once seen as delinquent, he says the role of comic books have changed over time. “People used to have an issue

with drawings in books, but people now realise comic books can give people that extra story, while video games have taken over as what’s seen as the new ‘bad influence’,’” he says. Confident of their staying power, Mal believes there will always be a place for a comicbook store in Canberra. “I think they’ve lasted the test of time because there are

lots of layers of coolness about them,” Mal says. “They have the ability to tell a very action-packed story very easily through a visual medium – you can get a lot of information across very easily. A comic is something you can store away, give to a friend, frame it as a collector’s item... for many people, a comic means something to them.”

School holiday fun! Celebrate School Holidays at the The Marketplace! Enjoy 7 days of arts, crafts and entertainment at The Marketplace. Kids can join in the fun for FREE and create their own backpacks, decorate cup cakes, join in a pirate treasure hunt and much more these school holidays! Thurs 11th – Wed 17th July 2013 Located in front of Big W, 11.00am to 2.00pm daily. For full schedule of activities, visit www.themarketplacegungahlin.com.au

GUNZEL? We didn’t know either until STEPHEN EASTON interviewed one this week (a train enthusiast). Elsewhere, arts editor HELEN MUSA talks to singing legend Don McLean, SONYA FLADUN comes face to face with bullying and CEDRIC BRYANT makes a case for enjoying the garden despite the winter cold. 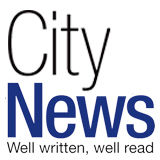