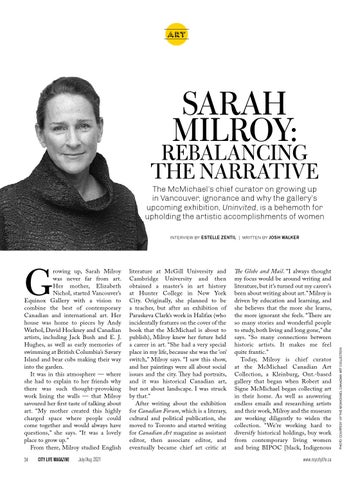 The McMichael’s chief curator on growing up in Vancouver, ignorance and why the gallery’s upcoming exhibition, Uninvited, is a behemoth for upholding the artistic accomplishments of women

rowing up, Sarah Milroy was never far from art. Her mother, Elizabeth Nichol, started Vancouver’s Equinox Gallery with a vision to combine the best of contemporary Canadian and international art. Her house was home to pieces by Andy Warhol, David Hockney and Canadian artists, including Jack Bush and E. J. Hughes, as well as early memories of swimming at British Columbia’s Savary Island and bear cubs making their way into the garden. It was in this atmosphere — where she had to explain to her friends why there was such thought-provoking work lining the walls — that Milroy savoured her first taste of talking about art. “My mother created this highly charged space where people could come together and would always have questions,” she says. “It was a lovely place to grow up.” From there, Milroy studied English 34

literature at McGill University and Cambridge University and then obtained a master’s in art history at Hunter College in New York City. Originally, she planned to be a teacher, but after an exhibition of Paraskeva Clark’s work in Halifax (who incidentally features on the cover of the book that the McMichael is about to publish), Milroy knew her future held a career in art. “She had a very special place in my life, because she was the ‘on’ switch,” Milroy says. “I saw this show, and her paintings were all about social issues and the city. They had portraits, and it was historical Canadian art, but not about landscape. I was struck by that.” After writing about the exhibition for Canadian Forum, which is a literary, cultural and political publication, she moved to Toronto and started writing for Canadian Art magazine as assistant editor, then associate editor, and eventually became chief art critic at

The Globe and Mail. “I always thought my focus would be around writing and literature, but it’s turned out my career’s been about writing about art.” Milroy is driven by education and learning, and she believes that the more she learns, the more ignorant she feels. “There are so many stories and wonderful people to study, both living and long gone,” she says. “So many connections between historic artists. It makes me feel quite frantic.” Today, Milroy is chief curator at the McMichael Canadian Art Collection, a Kleinburg, Ont.-based gallery that began when Robert and Signe McMichael began collecting art in their home. As well as answering endless emails and researching artists and their work, Milroy and the museum are working diligently to widen the collection. “We’re working hard to diversify historical holdings, buy work from contemporary living women and bring BIPOC [black, Indigenous www.mycitylife.ca 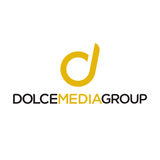